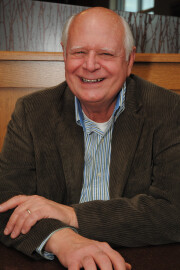 Dr. Monte Hasz began as an adjunct faculty member at Denver Seminary in 1994. In April of 2006, he was appointed interim chair of the counseling division, in 2010 was granted faculty status and appointed assistant professor of counseling, and in 2015 he was promoted to associate professor of counseling. He is a member of the American Association of Christian Counselors (AACC) and the Colorado Psychological Association (CPA).

In addition to serving on the faculty at Denver Seminary, Dr. Hasz maintains a half-time private practice at Southwest Counseling Associates in Littleton. As a licensed psychologist, his professional areas of interest include brief therapy, development, marriage and family, and men’s issues. He has co-authored a book, Promoting Change through Brief Therapy in Christian Counseling, as well as several articles on brief therapy and marital treatment.

Ep 66: Farewell Reflections with Dr. Monte Hasz
Back to Directory
We use cookies to ensure that we give you the best experience on our website. Please click the Accept button to acknowledge the use of cookies on our site.Accept