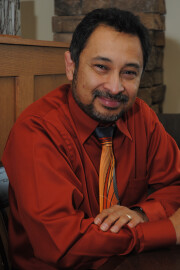 Dr. Wilmer Ramírez joined the faculty in 2013 as an instructor in Hispanic studies. Since 2008, he has been the director of the Hispanic Initiative at Denver Seminary. He received his BA in theology from the Central America Theological Seminary (SETECA) in Guatemala. While teaching at SETECA, he also received his MA and a ThM from the same seminary. In 2020, Dr. Ramírez earned his PhD in Educational Studies from Talbot School of Theology.

Before coming to Denver Seminary, Dr. Ramírez taught at the Central America Theological Seminary as well as in the Pan-American Neo-Pentecostal Theological Seminary in Guatemala. He was the founder and director of Edificar Ministries in Guatemala where he published Bible study materials for under-served churches in Central America. Dr. Ramírez is ordained by the Evangelical Church Alliance and his experience as a pastor also informs his teaching and leadership in the Hispanic Initiative.

Areas of academic interest and research include the impact of faculty’s cultural competence in the theological formation of students of color in seminaries, and the development of culturally competent programs for underserved immigrant communities.

Listen to Dr. Wilmer Ramírez on Engage360
Back to Directory