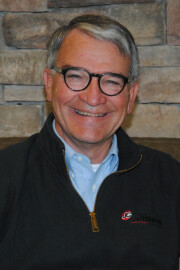 Marshall Shelley joined the faculty of Denver Seminary in 2016 and serves as director of the Doctor of Ministry program and associate professor of pastoral leadership and ministry. He was editor of Leadership Journal for 34 years, and as a vice president at Christianity Today, oversaw Christian History, Marriage Partnership, Church Law & Tax Report, and Men of Integrity magazines and PreachingToday.com. He earned a BA in journalism from Bethel University and an MDiv from Denver Seminary. He also took coursework at Wheaton College Graduate School, Trinity Evangelical Divinity School, and Stanford University, and received a DD from Denver Seminary. He has authored several books, including Well Intentioned Dragons and Leadership Secrets of Billy Graham, and he was general editor of The Quest Study Bible. He has served on the boards of the Evangelical Press Association, Marble Retreat, Denver Seminary, and as board chair of the American Tract Society. In addition, he worked as a copy editor for The Denver Post and served on the pastoral staff of two churches.

Listen to Dr. Marshall Shelley on Engage360
Back to Directory