A Brief History of Thought: A Philosophical Guide to Living 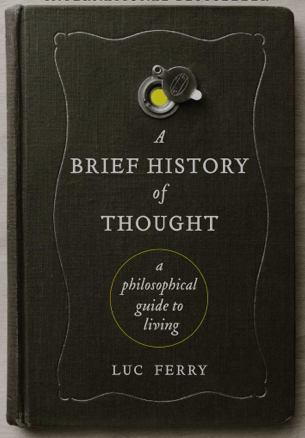 One of the most formidable charges a philosopher can undertake is the task of summarizing the history of philosophy in a way that is both cogent and concise without a void in vibrancy. Many have attempted this with varying degrees of success, but few are able to deliver like Frenchman, Luc Ferry, professor of philosophy at the Sorbonne in Paris. Ferry organizes the history of philosophy into five eras (Greek dominance, the Christian middle-ages, enlightenment humanism, postmodernity, and the post-deconstruction present), each of which must confront and ultimately answer the nagging problem of death.

Humanity is mortal. This point is largely incontestable among philosophers, forming the self-evident heart of our most ubiquitous concern. But according the Ferry, the way in which humanity copes with this problem forms the central concern of the philosophical venture. The uniqueness of Ferry’s response to the problem stems from his high view of philosophy and from his love for the discipline which has inclined him to offer philosophical reflection as the best possibility for living well and overcoming the fear of death (p.5). But rather than offer any one philosophical system as an ultimate response to the human condition, he offers instead the possibility of a philosophical era that will bring humanity closer to the truth. As Ferry steadily builds his case, he reveals his belief that this era of truth is nearly upon us. This is so, because according to Ferry, our “salvation” lies in the evolution of the human person and their ever-increasing knowledge of themselves and their world. When we embrace this knowledge we will be able to embrace the reality of death, to love well, and to live for wisdom.

As Ferry wrestles with the problem of death, he succeeds in introducing the universe of philosophy to the layman – opening the bottomless pit of philosophical reflection and helping the newcomer navigate its tempestuous waters. He succeeds at defining terms, avoiding jargon, and whetting the reader’s appetite for difficult and important concepts, while reducing the history of ideas into manageable segments where key texts and figures are consulted.

A tone of sincerity permeates Ferry’s writing as he lays open his personal philosophical reflections and struggles. Even his critique of Christianity, while flawed, is refreshingly less christophobic than what normally flows from the secular academy. While many Anglophone intellectuals (Richard Dawkins, Sam Harris, and Daniel Dennett) are hammering the Christian belief system from a deep seated rage that hints of psychosis, some of their Francophone counterparts (Ferry for one) have confronted the faith with a touch of openness in place of the usual distain. With near lament in his tone, Ferry admits that if only God truly existed he would be tempted to accept the viability of the Christian worldview (p. 263). But even so, Christianity is by no means singled out for critique. The philosophies of Stoicism, rationalism, and numerous post-enlightenment ideas are treated with equal suspicion as Ferry attempts to find the most sustainable and intellectually satisfying philosophy of life.

Though Ferry’s introduction to the history of ideas succeeds in many ways, it also has two significant shortcomings. First, he places all philosophical hope in the very humanity he insists is fallible and prone to inescapable error. Since Ferry presupposes Darwinian materialism, he can quickly conclude that while so-called divinely inspired religious writings have no firm intellectual base, the works of the philosophers are, in a sense, authoritative. This assumption allows Ferry to insist that theistic belief is based on irrational faith devoid of reason, thus excluding supernaturalism from the conversation. But even if an authoritative answer is to be found in the work of the philosophers, Ferry must admit that this authority is susceptible to a greater authority, that being the scrutiny of later philosophers whose doubts and reflections supersede those of their predecessors. By this he only diminishes the authority of the intellectual discipline he holds so dear.

Ferry’s materialistic presupposition forces a second difficulty: to accept that the human understanding of the solution to the problem of death is an ever-evolving exploit. Though there is some truth in this, Ferry is forced by his own view of history and evolution to accept the fallacy that the latest idea is the greatest idea (p.199):

It is not possible, even were it desirable, to go backwards. Versions of ‘a return’ to a prior dispensation never make much sense: if the earlier positions were so feasible and so convincing, they would not have been abandoned, would not have laid themselves open to the rigors of criticism, would never have ceased being in season.

However, the true historian of philosophy should know better than anyone else that so many of our modern ideas are the offspring of the ancients. There is little, if nothing, new under the sun. And there may be more to the past than Ferry is willing to acknowledge. The history of philosophical reflection should not be viewed as a mere chronology. There is a condition of wisdom and folly that affects every generation. The ability of people to look inside themselves for a satisfying response to their own misery is yet to be accomplished, either by Ferry or by any other philosopher. If humanity is only ever evolving, then so also is the answer to the problem of death – a now infinite problem to which the whole of humanity can only despair.

It is unfortunate that with the depth of insight that Ferry brings into the history of thought, this leading philosopher would so readily dismiss the claims of Christianity, which not only offer a philosophically rational explanation for the human condition and relationship to God, but which offer a hope that is grounded in the historical reality of the cross of Jesus Christ. If not for the truth of Christ’s life, death, and resurrection, a step of faith would indeed be irrational. But by the historically factual resurrection of Jesus, victory has been taken from death once and for all. By overlooking this vital point, Ferry only perpetuates the unanswerable problem of death.

With all that is right in this book, the one most important piece of the history of thought was glibly glossed over. Ferry is right that the riches of philosophy are worth every moment spent on them. He is right that the study of philosophy will help point us to the answers for which we look. He is right that every era in the history of thought is plagued by intellectual inadequacies. But it may be that neither this present age nor the future to which it will succumb is able to offer a satisfying answer to the questions we have faced for centuries.

It may just be that going back is the only way we will ever hope to move forward. And what do we go back to in order to answer the problem of death? The cross of Christ.