A Queer Thing Happened to America: And what a long, strange trip it’s been. 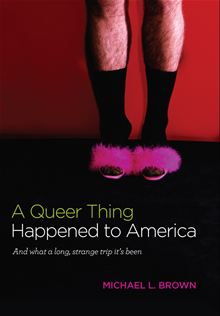 Truly, a queer thing has happened in America. While our next generation is moving toward a genderless generation, as if a gender distinction is another form of oppression to be rid of, the life-giving institutions of marriage, human civilization, freedom, and conscience are under attack.  From the cradle to the tomb, all dimensions of civic life are affected by the gay agenda. From the beginning, “gay activists framed the term gay rights…describing their battle from the get-go as one over ‘rights’ implies homosexuals are being denied the basic freedoms of citizenship that others enjoy (374),” deemphasizing their sexual behavior.  The Lesbian, Gay, Bisexual, and Transgender (LGBT) movement has formulated a new definition of homosexuality that is more plausible and persuasive in political terms rather than psychological terms (375). Now, what the gay community has is not a psychological disorder but only a social disqualification. The LGBT movement is not seen as

part of the sexual revolution of the 60’s (which is associated with promiscuity and the casting off of moral restraints) or, worse still, as reflecting an aberrant, disordered condition, it is seen as part of the Civil Rights movement, thereby being identified as a struggle for equality and justice (375).

So, Brown shows us what is happening right now by exploring several of the dimensions of society, supported by extensive research and meticulous documentation. It is a must-read for anyone who is homosexual or heterosexual. Brown prophetically takes us to the logical conclusion of the current trajectory the human race, just as the “tragic flight path of KAL 007 initially veered just 5.9 miles off course, but that 5.9 miles soon became 50 miles, then 100, then more…until the plane crossed into Soviet airspace instead of Seoul, Korea…taking the lives of 269 passengers and crew” (550). This book is not about “gay bashing,” but is reliable and well-balanced research where the author painstakingly tries to present both homosexual and heterosexual perspectives objectively based on his dialogue with the gay community over the years.

Framed as a political issue sponsored by the government, the gay agenda penetrates deeply into all the fabric of civic life. Children with their impressionable young minds, like wet cement, do not receive a healthy and balanced concept of human sexuality and family. They are taught from an early age that gender is not biologically given at birth but socio-culturally assigned by an individual. Teenagers are on hormone blockers to delay the onset of puberty (98). A look at the Gay, Lesbian, and Straight Educational Network (GLSEN) manual for public schools reveals:

Gender is traditionally thought to be a set of two binary categories: male and female. An individual’s gender is also traditionally determined by their body. However, many people are identifying, expressing, and understanding their gender in a broad spectrum of ways that this traditional binary system does not include. (321)

In fact, there is an endless list of contemporary “gender identities and phases thereof (68 lists)” (592). Parents are no longer called father and mother, but parent A and parent B. Teachers ask children to line up by the color of their sneakers instead of gender. Teachers do not want children to feel boxed in (96). Colleges for women in the Northeast are forced to rethink the use of pronouns entirely (561). The words such as “inclusion and diversity have become part of the stock vocabulary of gay-friendly political correctness” (278). Under the auspices of the GLSEN, children at school are learning not to be hateful, bigoted, and intolerant by receiving a lesson on “cross dressing and non-gender conforming clothing” (97).  School children in Massachusetts were asked to answer Orwellian questions such as: “What do you think caused your heterosexuality?” “If you have never slept with anyone of the same sex, how do you know you wouldn’t prefer it?” “Is it possible you merely need a good gay experience?” (102-103).

Hollywood succeeded in systematically desensitizing the minds of people to the deviant gay lifestyle by caricaturing it as a healthy alternative to heterosexuality. The media have created a strong social plausibility structure, and people are not willing to entertain beliefs that are antithetical to the socially-constructed worldview despite its harm. Whoever adheres to the traditional concept of marriage between a woman and a man is labeled as an intolerant bigot, comparable to Hitler. Whoever takes “issue with gay activism on any level is to commit professional suicide” (10). If one holds a different view based on religious conviction or other reasons, he or she must be careful not to think out-loud. Church is no longer a safe place; you no longer have freedom to express your conscience except in private. In the UK, policemen informed a street preacher that “it is a criminal offense to identify homosexuality as a “‘sin’” (534). The celebration of bisexuality, the normalization of transgenderism, the recommendation of sex-change surgery, and the ridicule and the denial of ex-gays are not enough, until being gay becomes the new norm (159).

Embracing diversity means “endorsing homosexuality and supporting the goals of the gay and transgender agenda” (275). Diversity is enforced in the workplace by the Human Rights Campaign (HRC), and companies that openly support someone who adheres to traditional marriage can be a cause for boycott and economic disadvantage (280). Companies are being evaluated and rated based on HRC’s Corporate Equality Index. Quoting from the HRC Corporate Equality Index for 2010 (569).

Note on pronouns: If a co-worker is transitioning (“from one gender to another gender”) and you are not certain which pronouns to use, it is appropriate to respectfully ask his or her name and which pronouns you should use. In general, it is considered insensitive to refer to someone by the wrong pronoun once you have established which set of pronouns he or she prefers. Again, transitioning employees should be prepared to help educate their co-workers (Workplace Gender Transition Guidelines, 7).

If a worker is perceived as offensive by a LGBT employee, the worker is subject to disciplinary training on diversity awareness (284). The gay agenda is revolutionizing the way we talk and even the way we think. Embracing diversity and tolerance means “embracing all kinds of sexual orientation, (homo) sexual expression, and gender identification but rejects every kind of religious or moral conviction that does not embrace these orientations, expressions, and identifications” (48). “Gays are virtually exempt from the charge of hate speech–no matter how vile and incendiary the rhetoric–since they are always the (perceived) victims and never the victimizers” (49). It is a one-sided tolerance and tolerance depends on the person who uses it.

Homosexuals are offended when homosexuality is mentioned in connection with pedophilia (228). However, the issue of pedophilia follows the steps of homosexuality: 1) the same arguments such as innateness and involuntariness are raised for pedophilia, 2) the same arguments that were raised to remove homosexuality from the APA’s Diagnostic and Statistical Manual (DSM) in 1973 are being brought up to remove pedophilia from the DSM. In the past, male homosexuality was closely related to pedophilia, “and many of the pioneer gay activists were proponents of man-boy love” (228). If homosexuals can be accepted based on their claims of innateness, then logically there is nothing to stop inborn pedophiles from having the same rights and freedoms.

Brown argues that having certain dispositions does not mean that one does not have any choices, and a penchant for certain behaviors does not mean that “one is locked into acting out those behaviors” (208). Research has shown that a young man with a predisposition to a delinquent behavior removed the risk of becoming violent by having regular meals with his family (210). People can be predisposed to alcoholism, obesity, unfaithfulness or homosexuality, but this does not prove that these genetic influences are beneficial (215). Brown grants the genetic contribution to homosexuality to be roughly 10%, according to Dr. Neil Whitehead’s research result (215). Even if one generously yields a 50% genetic contribution to homosexuality, it no more proves than one’s having “feelings about roller coaster rides,” “attitudes toward reading books,” or “having traits of humility” according to the American Psychological Association web site (215).

What about children who are born and grow up under gay parents? Are homosexuals thinking about the impact of their children or just about themselves? Boys growing up under lesbian parents are feminized and girls growing up under gay parents are masculinized. Children grow up confused by never having a father or mother. Is it a responsible procreation when a third party must be involved to have an offspring? What does same-sex marriage confer to the society? Without traditional marriage, where the union of a woman and a man occurs as the only possible means of potential procreation, none of us would be here. The idea of the human race was from God and there is a reason we define marriage between two people, “a heterosexual order” of a male and a female, which is not just a biological union but an “emotional and spiritual unity, uniquely fit to reflect the image of God (Gen. 2:24) (592).” So, the union of male and female constitutes the natural family and is the ideal environment for children to be nurtured and raised (593).

Brown urges us that it is not too late to turn the tide. Although a queer thing has happened to America, “there is a way forward (not backward), a better way, a “‘straighter’” way” (597). We can do this by integrating our Christian truth with our areas of specialty. We can have our voices heard in the areas of our expertise to turn the tide even at the expense of being branded as “intolerant bigots” (597). The church as the salt and light should become the conscience, the guide, and the critic of the state. We must break our silence in the market place of ideas by persevering through “the inevitable vilification and misunderstanding in solidarity with the sufferings of Christ” (598). Let us not dismiss homosexuality matter-of-factly, rather let us draw ourselves close to our anguished friends whose journeys are often replete with loneliness, angst, and grief.