A Wind in the House of Islam 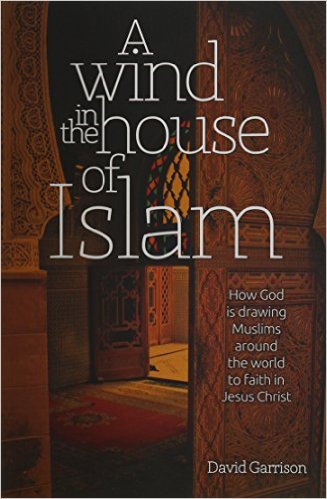 Dr. David Garrison has studied both Islam as well as God’s work among Muslims for over twenty years. He has written and edited nine books about God’s work among the world’s least reached peoples. Furthermore, he served with the International Mission Board for over thirty years.

A Wind in the House of Islam is based on countless hours of research, extensive travel to different regions of the Muslim world, and interviews with more than 1,000 former Muslims who are now followers of Jesus Christ. These Muslim background believers (MBBs) are part of movements to Christ from within their own communities. Through this extensive project, Dr. Garrison desires to provide an accurate description of what God is doing across the region.  He also hopes that by showing Christians from around the world what God is doing among Muslims, they will more readily engage in reaching out to their neighbors. Finally, he hopes that this will be an encouraging resource bringing solidarity to MBBs themselves.

Garrison’s studies reveal that Islam has been growing for 1400 years, gaining territory and drawing other peoples without a significant number of sustained, self-motivated movements of Christianity. He defines a movement of Christianity as over 100 new churches or 1,000 baptisms among one people group in a span of two decades. In the first fourteen centuries of Islam there were fifteen movements, yet in the first twelve years of the 21st century there have been at least 60 movements. These movements are found spread out in each of the nine rooms. Unprecedented numbers of Muslims are placing their faith in Jesus. Garrison reveals what for centuries missionaries, missiologists, and church historians dared not hope nor imagine – a wind is blowing in the House of Islam.

Dr. Garrison devotes the first section of The Wind in the House of Islam to establishing the basis and methods of his research. Garrison provides an overview of different efforts of Christians to make disciples for over 1400 years in the Muslim world. Then he points out hinges – or turning points – in history marking considerable shifts in Western perspective of Muslims. Garrison also explains security concerns and other factors which both limit his research as well as impede full disclosure in reporting the results of his research.

Through exhaustive research, Dr. Garrison uses the second section of The Wind in the House of Islam to walk through each of the rooms of the House of Islam. In each room, Garrison provides the unique historical overview and cultural context so that the reader might understand both the inherent barriers to the Gospel as well as the distinctive characteristics of movements in their respective rooms. Garrison identifies some of the catalysts and threats to the movements with special attention given to sharing testimonies of how people moved from being followers of Islam to followers of Jesus Christ.

These testimonies may be the most precious part of the work, revealing how people from varying walks of life are drawn by the Holy Spirit to the person of Jesus Christ: Islamic teachers, scholars, religious fanatics, shopkeepers, business people, and school girls have all been impacted in different ways by the Gospel. In each room, Garrison follows the testimony section with attention to ministry strategies, growth models, discipleship methods, and the visibility of the church unique to that room. Some Koranic teachers lead hundreds of their students to follow Jesus, some communities have organized discipleship and evangelism networks, while other communities have special community gathering places. Garrison discovers moving answers to his questions such as, “What is God doing in your community?” “How did God get your attention?” and “What is God using to bring Muslims to faith in Christ?”

Garrison uses the last section of the book to synthesize his findings and provide practical steps for the Western Church. He identifies ten bridges God is using to draw people to himself, including: dreams and visions, missionaries, access to Bibles, and access to the Koran. Of special note was the bridge of an indigenous witness in a culturally sensitive manner being especially effective as a means for people coming to Jesus.

As one who has spent over 15 years serving in different rooms of the House of Islam, I had three observations. First, I was surprised to see my opinion of contextualization in cross-cultural ministry to the House of Islam challenged. Before reading the book, I had been set in an anti-contextualization opinion. I saw it best that an MBB should sever ties with their old religious – and cultural – practices. However, through the book, I began to wonder if my stance on contextualization was too stringent and refused to graciously allow restrictive factors of a given culture to impact the structure of a movement. This begs further exploration. On another note, I found one minor fault in the editing of the text. It reads, “Proverbs 14:16 ‘Now the overseer must be above reproach, the husband of but one wife, temperate, self controlled,’” (201). The verse quoted here is found not in Proverbs, but in 1 Timothy 3:2. Finally, through the book I was encouraged to see such a clear call to the Western church to participate with God’s work in the Muslim world – a call which is not frequently heard within the Evangelical community. This book is a priceless tool to mobilize the Western church to both better understand our brothers and sisters in the Lord and labor with God’s wind in the House of Islam.