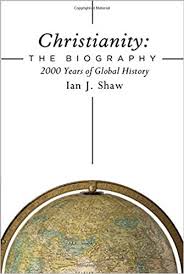 A few years ago, due to curricular restraints, we at Denver Seminary reduced our church history requirements from two semesters to one. Among the many challenges this presented was finding a suitable textbook. There are many church history texts on the market right now, and several new ones appear each year. But finding one that’s appropriate for a one-semester course has proven difficult. There are several very good ones that are multi-volume, but they’re unmanageable for a short class. Several others take a very western-centric approach to church history, ignoring much of what happened in the non-Western parts of the world before the 19th century. Others are simply not particularly interesting, being so loaded with obscure names and dates that any kind of narrative flow is lost.

The challenge is to find one that is short enough to be readable in one semester, that is global in scope, that’s up-to-date, and that is readable. Christianity: The Biography. 2000 Years of Global History is one of the few I’ve found that meets these criteria. Ian J. Shaw does a masterful job of telling the story of Christianity in an interesting and well-written way. His approach is global. He includes developments outside of the Roman Empire in the early days of the church and outside of Europe and N. America at later stages and shows them to be part of our story. Too often the stories of the churches in the Middle East, Central Asia, China and India are ignored by traditional church histories because they deal with those who were declared to be heretics following one council or another, and therefore were not seen as worthy of mention. Yet these Christians were instrumental in spreading the faith over huge territories in Asia and Africa, and they also persevered during intense periods of persecution. Christianity didn’t become a global religion only through the protestant missionary movements of the 19th century. It had that character far earlier, from its very beginnings. Shaw weaves this often-neglected history throughout the centuries and throughout the book.

The unique feature of the book is that it claims to be a biography. The organizing structure follows that of a typical human life span, from birth to toddlerhood to childhood to teen and young adulthood to old age. Chapter titles such as “The cradle”, “Smiles”, “First steps”, “Tears”, and “Learning to write” give a sense of the approach. Each chapter begins with a “Lifeline,” a list of up to twelve dates and events, some secular and some Christian. Following the Lifeline, the opening paragraph introduces the chapter’s topic, tying the story to a stage of life in the biography. The timelines from one chapter to the next aren’t chronological; several chapters in a row might cover roughly the same time period. Usually between two and four chapters will deal with the same era, but focus on different topics. For example, one might outline geographical expansion, another with theological developments and controversies, while a third might deal with the secular context. Usually the chapters are not as discrete as I’ve described, and the organizing principles aren’t fully transparent to me. For example, Ch. 7, “Moving on and moving out”, tells the story of Chrysostom and Augustine, and at the same time details the expansion of the church beyond the Roman empire. I really like this level of integration, but I’m simply not sure how Shaw decided to put things together. Related to this, by and large, there is no clear differentiation between eras, or even naming different eras. The story is told pretty seamlessly. This could be viewed both positively and negatively. On the positive side, it doesn’t impose an artificial chronological scheme on history. Negatively, it makes it difficult to know, at least from the table of contents, which period of time is going to be covered.

There are a few things I’m not enamored with. The biography construct is forced at times. Usually it is only referenced as only part of a short paragraph or even a single sentence at the beginning of a chapter. It’s almost as if Shaw himself isn’t committed to the idea all the time. As just one example, chapter 14, “Desires for Purity, Orthodoxy and Piety,” opens this way. “Self-image and issues of truth and purity can be major challenges for young people entering adulthood, the outcome of which helps to shape their future identity. Key debates in sixteenth- and seventeenth-century Europe related to the nature of the “true faith”, religious “purity”, inner piety and the structure of the church” (p. 176). What makes these issues, described in the early modern period, correspond to a person’s late teens, is opaque at best. A life cycle approach doesn’t work if there are multiple life cycles at the same time. What might be construed as teenage years in one part of the world might very well be birth pangs in another part and last dying gasps in yet another. Christianity has never been a religion with a single center, but has had multiple centers throughout the centuries. This makes a single biography more complicated.

The brevity of the book doesn’t allow a lot of detail, particularly regarding the specifics of theological debates. It’s not a historical theology or a history of theology. The emphasis is on the narrative. That being said, nothing stands out to me as a glaring omission.

Finally, a couple of quibbles. On page 257 Shaw lists Brazil as the second largest missionary sending country, with 34,000 missionaries. This is simply wrong. The Brazilian church is becoming a significant sender, but there are nowhere near that many. India and S. Korea both send more than Brazil. This is one place, among others, where a lack of footnotes, indices, and references don’t allow fact-checking. This is not a reference work. The Kindle version is of course searchable, but the hard copy has no such resources. A three-page list of suggestions for further reading is included. The sources are useful, but much more could have been added.

In summary, the author has done a great job of condensing the 2,000-year history of global Christianity into 268 pages of easily readable text. All in all, I really like this book and can warmly recommend it. Those who want to get an overview of Christian history will do so in an easily digestible manner, and those who want a quick review will find it helpful as well.