Created Equal: How the Bible Broke with Ancient Political Thought 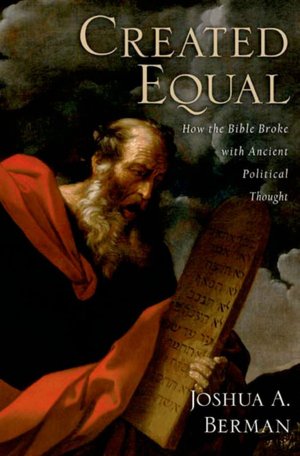 In contrast to some suspicious readings of Deuteronomy that find motives aimed at exalting one class in Israel over others, Berman studies this text along with other biblical literature to argue that a major theme of egalitarianism exists and is communicated as a fundamental teaching of the Bible.  He contrasts this with the general ancient Near Eastern inequity between the dominant tribute-imposing class and the dominated tribute-bearing class.

Beginning with the creation stories, Berman identifies the hierarchical structures of deities in the polytheisms of Mesopotamia, Egypt, and Ugarit.  He notes that these justify the institutionalized powers of the king and priesthood in their societies and envision the rest of the population as slaves of the gods.  Turning to Genesis 1 and Psalm 8, Berman finds a contrast with the low view of people in the ancient Near East.  God creates humanity to dominate the earth and to share in the divine glory.

Building on well-established research, Berman likens the overall form of Deuteronomy to that of the Hittite vassal treaty, a unique “transformation” of this form of communication (cf. my “The Old Testament as a Model for Cultural Transformation: Perspectives from Archaeology,” Near East Archaeological Society Bulletin 46 (2001) 1-7).  He correctly notes that such treaties were almost always made between the Hittite sovereign and the king of the vassal state; rather than the citizens of that state.  Berman argues that the treaty covenant of Deuteronomy identifies God as the sovereign and all of Israel as the vassal king.  In this case, the “you” who are addressed in the laws are not just a collective sense of general empowerment, but personal.  Each and every Israelite is a kind of king given his own parcel of land and having a direct connection with the overlord.  Within the confines of what he recognizes as a patriarchal society, Berman nevertheless asserts that class differences and especially the role and power of Israel’s king are attenuated.

It is particularly with reference to the king that Deuteronomy develops an egalitarian political ethos.  The book is addressed to Israel collectively and personally as “you.”  There is no preferred status.  The army of Israel is made of its citizens all serving together.  For this reason there is a prohibition of the amassing of horses by the king.  In the world around ancient Israel this often created a special privileged class that possessed wealth and power to maintain their horses and chariotry.  In all this, the king is not the lawgiver, but rather he is subject to the law.  He is to study and copy it so that he may obey it.  Deuteronomy 17 likens his responsibilities to those of every other Israelite citizen.

Likewise, the powers of the priesthood, a group that had enormous influence in the surrounding cultures, is held in check.  They do not divine in secret.  They interpret a publicly known text.  They do not amass properties as in the case of the Egyptian temples and elsewhere.  They are forbidden to own land and thus cannot use their office to acquire such wealth.  Berman finds controls also present in the power of the judges.  Deuteronomy 16 stresses that “you,” i.e., the Israelite people, are to choose and remain responsible for the judges and their decisions.  Berman also argues that the tribal identity is attenuated by such matters as the absence of a set of courts at the tribal level (they appear only at the town and national levels).  This is not as clear, given the absence of an explicitly negative evaluation of the tribal role.  Further, the impact of various tendencies, whether Solomon’s reorganization of the provincial structure in 1 Kings 4 or the aftermath of the fall of Samaria and the Assyrian invasion of 701 B.C., also contributed to challenges to tribal identity; but for different reasons.

In his examination of assets, Berman argues that laws governing land, debts, tithes, redemption, and release all combined to prevent unlimited acquisition by a few wealthy members of society and to resist the impoverishment of fellow Israelites due to a bad harvest that would place one in an unrecoverable cycle of debt slavery.  Regarding the years of debt release and of the freeing of debt slaves and return of land that had been sold for debts; because the dates of release were known publicly and well in advance, it provided for greater stability than the comparative Mesopotamian edicts that might come at the unexpected death of a king and the accession of his successor.

Most importantly, these economic provisions were realized at the local family, clan, and town level.  They were not the product of a massive centralized government and bureaucracy.  This contrasts with Egypt and especially Mesopotamia where priests and kings controlled the collection of taxes and determined who received the redistributions.  As Berman notes, the biblical vision stands opposed to the state centralizing the resources and redistributing them.  Instead, it endorses the meeting of the needs of the poor (and of the community as a whole) on a local level where the people can see and personally know who holds the resources and how they are being allocated.  Thus the “tax” or tithe to the sanctuary could be retained and enjoyed by the one who paid it (Deut 14:22-26); and every third year it was to be given by the Israelite who produced it to those who had no land and were dependent (Deut 14:27-29; 26:12).

Berman also examines the development and use of the alphabetic script that Israel was blessed with from its inception.  He is surely on the right track in acknowledging how this facilitated the greater and wider ability to read texts such as the laws of Deuteronomy and to enable Israelites to understand and evaluate the actions of their leaders.  Although the cumbersome syllabic systems of Egypt, Anatolia, and Mesopotamia discouraged literacy, writing and reading was more easily available to more people in ancient Israel.

A final chapter considers the Pentateuchal narratives as examples of a development in the analysis of the actors as individuals with their own motivations and sensibilities.  Berman concludes by tracing these ideas through Judaism and Christianity in its impact on Western civilization and history.  He finds a unique expression of this in the founding documents of the American state.  As the Declaration of Independence insists, equality does not exist when people form themselves into a community (as in Classical Greece).  It exists as an inherent right that no political leader or environment can create or take away.