Four Views on the Church’s Mission 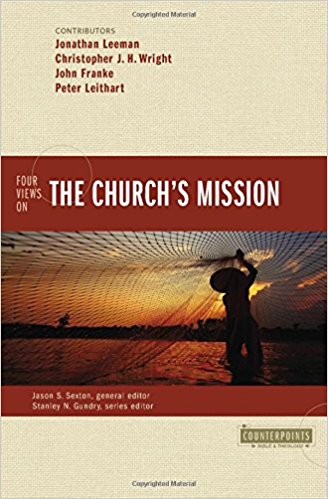 Four Views on the Church’s Mission is the next installment of an on-going conversation about the role of the church in God’s mission and the church’s appropriate engagement in the world. The intensity of this conversation has increased since the publication of Christopher J. H. Wright’s, The Mission of God: Unlocking the Bible’s Grand Narrative in 2006 and the rebuttal book, written by Kevin DeYoung and Greg Gilbert in 2011, What is the Mission of the Church?: Making Sense of Social Justice, Shalom, and the Great Commission. Four Views continues the debate between a view of the church that claims its primary roles are teaching, preaching and evangelism and a more expansive view that includes the church’s participation in the redemption of all creation. However, Four Views includes two additional perspectives, which add to the depth and relevance of the conversation.

Each chapter begins with an essay from one of the four contributors and then includes responses from the remaining three authors.  It is a fascinating journey of biblical hermeneutics, sociology, cultural engagement, and political theology. The reader might easily finish each chapter inspired by a new metaphor or image, and at the same time, feel confused and frustrated by the intricacies of the issue.

Jonathon Leeman articulates the soteriological mission of the church and distinguishes between a broad and narrow mission of the church.  The broad mission includes everything that Scripture commands of Christians such as environmental stewardship, loving relatives, and integrity at work. The narrow mission insists upon a distinction between what is required of the individual Christian and the role held by the corporate body of Christ. Leeman calls upon the kingly role in Scripture to argue for a broad mission for the individual Christian, focused mainly on being the image of God in the world. The priestly role is reserved for the corporate, gathered church defined as “mediating God’s judgments” in proclamation, ordinances, and instruction (p. 26). Leeman states that “God specially highlights the church’s narrow mission by giving the church-as-organized-collective an authority that he does not give to every individual member” (p. 35). Although Leeman’s structure is intriguing and helpful, at times it seems laborious and overly complex. Leeman himself struggles to hold the distinctions between the kingly and priestly roles, giving the impression that the framework might be artificially imposed upon the church rather than outlined by Scripture.

Christopher J.H. Wright outlines a participatory mission for the church, arguing for the kind of co-laboring of the church and Christ in the redemptive work of all of creation that he has written about in previous works. Wright’s strength is his Old Testament theological work and narrative description. He carefully walks through major elements of Israel’s story to construct an understanding of the mission of God extending to the mission of the church. Wright engages in direct dialogue with DeYoung and Gilbert throughout his essay as he argues for a “holistic Gospel because the world is in a holistic mess” (p. 76). Just as Wright used a triangle to explain the paradigmatic role of ancient Israel in Old Testament Ethics for the People of God, he creates another chart here to represent the all-encompassing nature of the church’s mission. His “triple scope” of Cultivating the church, Caring for creation, and Engaging society provides an integrated understanding of mission (p. 81).

John Franke describes his answer to the book’s question as a contextual mission, flowing from the relationality of the Trinity and the central character of the mission of God – love. Franke poetically writes about the three-fold ways the church is called to “extend the good news of God’s love to the world”: as a sign, instrument, and foretaste of the kingdom of God (p. 112). In addition to discussing these roles of the church, Franke gives attention to the imperialistic history of Christian mission as evidence that the “mission and witness of the church must be reimagined.” To this task, he devotes the rest of his essay. The power of Franke’s essay is his discussion of the church’s mission in context. Although the other three contributors find some flaws in Franke’s argument, his articulation of the Gospel’s “translatability” and fresh adaptation as it moves across new ethnic, tribal, and linguistic barriers is a valuable element of the conversation (p. 128).

The final essay by Peter Leithart describes the sacramental mission of the church. He passionately rebukes both the proponents of a narrow or “traditionalist” mission and a broad or “revisionist” mission for ignoring the sacraments of baptism and the Lord’s Supper. He argues that the sacraments work together to unite the body of Christ as a “counter-polis” (p. 155). The brilliance of Leithart’s essay is the claim that baptism and the Supper unite what mission often separates: “creation and new creation, evangelism and socio-political engagement, individual and community, personal discipleship and active involvement” (p. 157). Recognizing that the other three contributors question some of Leithart’s Scriptural interpretation and practical application, his emphasis on all people being welcomed to the feast in the presence of God is a beautiful picture of the goal of God’s redemptive work.

This book is an enjoyable, challenging read that will spark new insights and questions. For those new to the conversation about the mission of the church, it will highlight the significant differences in the body of Christ about how the church should engage the broader society. For those familiar to the discussion, it will provide new metaphors and images. The book has one major flaw, which the editor acknowledges. Even though there are four different views on the mission of the church, the contributors still reflect a homogeneous group. All of the contributors are white men from the Western world. All of these essays, as well as the work and ministry of these four men, are commendable, respected, and insightful. They contribute powerfully to the overall conversation. However, the perspectives and scholarly work of women, people of color, and theologians and practitioners from around the globe must be included if the church of Jesus Christ is to come closer to a unified understanding of its mission. Having acknowledged this, Four Views of the Church’s Mission is still worthy of one’s time and attention.