Getting the Reformation Wrong: Correcting Some Misunderstandings 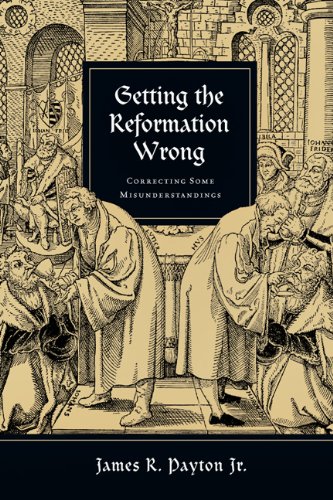 Payton wants to help Protestant Christians see themselves more truly, more accurately.  And, this entails, of course, being humble enough to acknowledge limitations and errors.  Thus, in his previous book, Light from the Christian East (InterVarsity, 2007), he presented a well informed and sympathetic introduction to (Eastern) Orthodox Christianity, along the way both identifying some of the shortcomings of Protestantism (particularly evangelical Protestantism) and commending some of the beliefs and practices of Orthodoxy.  In the present work, Payton draws upon his decades of studying the history of the 16th-century Protestant Reformation to help readers see that history more accurately.  And, as the subtitle indicates, this means “correcting some misunderstandings.”

Some of those misunderstandings are related to misunderstandings of the centuries immediately prior to the Reformation, and so Payton rightly begins with two chapters on the 14th and 15th centuries, often referred to as the late-Medieval period.  In Chapter 1 he describes the multiple “crises,” both within the church and in society at large, which resulted in a church and social fabric that were weakened and ripe for major changes.  A combination of factors such as agricultural failures and “the Black Death” (the scale of which is still almost beyond imagination), increased moral and organizational disarray within the leadership of the (Roman Catholic) church, the failure of church-reform efforts (most notably, conciliarism), and a fragmentation of the church’s theological discourse, fueled anticlericalism and set a stage for reform.

Thus, contrary to many depictions of the heroic efforts of the 16th-century reformers (and there were many heroes), Payton observes that the Reformation “was not initiating something new but was responding to a deep yearning” (p. 51).  There is, then, more continuity than is often thought between the Medieval period and the era of Reformation.  And, this basic point is reinforced in Chapter 2, in which Payton discusses the Renaissance.

When he turns to the 16th century, Payton begins (Chapter 3) by observing that, particularly in its earliest phases, the Reformation itself was “carried along, in the main, by misunderstandings” (p. 75).  That is, “much that was said was not taken in the way intended by Luther (or other speakers)” (p. 74).  For example, some viewed Luther as a spokesperson for an Erasmian humanism, while others saw him as an advocate for the under-classes and violent revolution.  Though these views were founded in misunderstandings, they nonetheless meant that Luther was listened to, he was given platform to write and speak.

Turning more directly to contemporary misunderstandings, Payton describes the conflicts among the Reformers (Ch. 4); what the Reformers taught—and, equally important for correcting misunderstandings, did not teach—regarding Sola Fide (Ch. 5) and Sola Scriptura (Ch. 6); and the true character of the Anabaptist stream of the Reformation (Ch. 7).  Thus, he shows the reader that the Reformation was not a monolithic, unified movement, but a diverse and hotly contested multiplicity of reform movements.  The reformers did not teach that salvation consists in faith without works, much less in a single-event act of “faith,” but rather a life dedicated to God.  The reformers did not teach that the Bible is literally “the only book” Christians need, but that scripture is best read in an informed manner, drawing upon both general learning and knowledge of the church’s tradition, particularly its early tradition.

Payton chronologically completes his description of the Reformation by looking at what took place concurrently and following in Roman Catholicism (Ch. 8), and what took place within Protestantism in the century immediately following the 16th (Ch. 9).  Payton describes substantive and significant reform efforts unfolding within the church of Rome, from the work of Francisco Jiménez de Cisneros and “rigorist” movements to the rise of the Jesuits and the Council of Trent.  And, in what was probably the most thought-provoking chapter for me (Ch. 9), Payton suggests that through a “fixation on logic” and an “objectification of doctrine,” Protestant Scholasticism changed not only the method of theology but, in the process, departed from the teachings of the Reformation—crafting a form of Protestantism that was not true to the Protestant Reformation.

In the final three chapters, Payton seeks to take a clear-eyed, unsentimental look back at the Reformation, suggesting that it was not the success it is often thought to be (Ch. 10), that it should not—certainly not by itself—have the degree of “normative” hold on Protestants which is sometimes has (Ch. 11), and that it needs to be seen consisting in both “triumph” and “tragedy” (Ch. 12).

As may be inevitable, there are some chapters of the Reformation story which are either incomplete or missing.  For example, Payton engages only the early portion of Luther’s life and work, up to the important year of 1521.  There is no extended, substantive attention paid to the English Reformation and Anglicanism.  And, while the focus of the book is on historical misunderstandings, it is surprising, nonetheless, that in the chapter of Sola Fide (ch. 5) there is not even acknowledgement of the contemporary reconsideration of the Reformation understanding of justification by faith in the context of the so-called “new perspective” in Pauline studies, which inescapably entails reconsideration, and perhaps rejection, of what the Reformers did and did not mean by Sola Fide.  And, the book would be of even greater usefulness through just a few, easy accommodations to its primary readership.  Latin terms and phrases could be translated, numerous terms could be simplified or defined, and lists of readings for further study could be provided.

Payton’s decades of study of the Reformation are evident.  He knows the Reformation.  There is little if anything in his analysis that is new; however, advancing scholarly study of the Reformation is not the purpose of the book, and he serves the reader very well by strategically drawing on many of the most important insights of recent Reformation scholarship.  He also clearly anchors a number of the chapters in primary sources.  In a clear and well-informed manner, he accomplishes what he sets out to do.  This is a good book.

I have only one word of caution to potential readers: If you read this book (and it is worth reading) do not let it be the only book you read on the Reformation.  It is written specifically for the purpose of “correcting some misunderstandings.”  Consequently, and appropriate to this purpose, it emphasizes and focuses on the failings of the Reformers and the shortcomings of the Reformation; it elevates and focuses on the reform impulses within the Roman Catholic Church; it elevates and focuses on the shortcomings of 17th-century Protestant Scholasticism.  (And, as noted above, my own thinking has been constructively challenged by, for example, Payton’s discussion of Scholasticism.)  The Reformers and the Reformation were marked by failings and shortcomings, and Payton does readers a service by employing his historical expertise to turn us from sentimental but erroneous, and in some instances damaging, misconceptions.  Truth matters, and that includes truth about history.  We need to see and hear the Reformers as they really were.  In order to do this, read this book, as well as others.