Here and Now: The Autobiography of Pat Martino 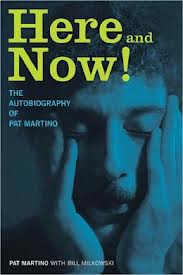 Autobiographies of jazz musicians are often a bit difficult to bring about in a suitable literary form. This is simply because most jazz musicians are gifted in the language of music, but not necessarily in written language. Some, like John Coltrane, are quite laconic (although one can read Coltrane on Coltrane, culled from interviews). Others, like Duke Ellington, were oratorically nimble and mellifluous in speaking (listen to his dazzling spoken introduction to “Afro-Eurasian Eclipse” on the recording of the same name), but a bit idiosyncratic (if not factually errant) in writing. Ellington’s autobiography, Music is My Mistress is wonderfully entertaining, but not the most thorough or literate account of the maestro’s life and music. (For that, see Harvey Cohen, Duke Ellington’s America [University of Chicago Press, 2010].) A fair number of jazz autobiographies are joint productions, as is Here and Now. Pat Martino, arguably—and I will argue it—the greatest living jazz guitarist, teams up with jazz writer Bill Milkowski (author of Jaco, the biography of jazz bassist Jaco Pastorius) to produce a brief but satisfying story of Martino’s life and music. Short interviews with other admiring musicians—such as guitarists Carlos Santana, Pete Townshend, and George Benson—are sprinkled throughout the book and make up Appendix I: Guitar Players Testimony.

Besides Martino’s long and distinguished career as a pioneering guitarist with a tremendous knowledge of musical theory is the remarkable story of his catastrophic brain injury and his slow but complete comeback, against the odds. After supporting various organ-saxophone groups in Philadelphia as a mere teenager (beginning his professional career at age sixteen), Martino established himself as a unique and virtuoso voice in jazz guitar, known for his laser-sharp precision, tasteful speed (no narcissistic shedding here), relentless swing, and pure fire. (He soon changed his name from Pat Azzara to Pat Martino.) Then, after various seizures and other mental difficulties, a congenital brain defect (arteriovenous malformation) caused Martino to lose nearly all of his memory, including his ability to play the guitar. When he awoke from his emergency surgery, he could not recognize his own parents. They were strangers, as was much of the world. His parents moved him back in with them and Martino slowly began to regain many—but not all—of his memory and, amazingly enough, relearned to play the guitar. Having listened to nearly all of his recordings before and after his brain injury, as well as having seen Martino perform four times in two days in Chicago in 2012, I can assure the reader that he regained all he lost—and added even more skill, soul, and musical intelligence. An appendix, “Martino Unstrung: A Brain Mystery,” by psychologist-journalist Victor L. Schermer explores in some depth the nature of Martinos’ injury and recovery—as does the fascinating and enjoyable DVD of the same name. Another appendix provides Martino’s voluminous discography.

This narrative is told rather sparsely, although we learn quite a bit about his parents and upbringing. One does not learn too much about his first marriage, for example. He writes more, not surprisingly, of his present wife, who he warmly credits as stabilizing and inspiring his life. However, Martino and Milkowski recount the basic outline of Martino’s life and especially musical development, which for Martino aficionados such as myself, is intrinsically interesting. The title, Here and Now, expresses something of Martino’s worldview.  While not elaborately articulated or described in metaphysical categories, Martino’s music and life centers on being “in the  present” fully, of finding a level of concentration that is pure and revealing. While deeply steeped in musical theory and possessing flawless execution, Martino believes that there is more to playing and music itself than human performance and acoustic expression. It is spiritual and may open one up to higher realities. However, he views this holistically. He surprisingly says,

I’m not a guitar player. I’m not a musician. Because I don’t really seem to find that of any interest in the long run. I’m more interested in what this whole phenomenon of life is really all about (ix).

Martino came of age professionally in the middle to later 1960s and was influenced by Eastern worldviews and the idealism of the early drug culture, which considered hallucinogenic drugs as, in fact, psychedelic. That is, these substances were taken to be potential portals to a spiritual state of some kind. But as Francis Schaeffer  (in The God Who is There [1968]) and Os Guinness (The Dust of Death [InterVarsity, 1973]) perceptively observed, these drug-induced or meditation- induced experiences lacked intellectual content and were not verifiable through reason and evidence. One gets a sense of this in Here and Now. Martino intimates here and there that reality is more than what normal sensory perception can capture, and that some music has a mystical affinity with this reality, but he is rather illusive about its nature or meaning. Although he was raised Catholic and mentions some short-lived involvement in a Catholic charismatic prayer group, his worldview seems eclectic and perhaps pantheistic. He is quoted as saying on the back cover:

I’ve often asked myself, ‘What am I?’…In fact the words I am are enough for me. They’re the words of God. And that to me is the essence of definition. The greatest truth comes right back down to the central part of what a person truly is—life itself. And when you reach such a conclusion, it’s so spiritual that it overcomes as well as transcends any of the crafts, like guitar playing. Maybe that’s what eventually leads us to discover, however long it takes.

This confession is a bit cryptic and elliptical, but the rest of the book intimates a spirituality and worldview more akin to Eastern mysticism than monotheism. God revealed himself to Moses as “I am who I am.” (Exodus 3:14). The language is that of a personal, self-reflective, and communicate being, who far transcends anything that Moses (or any human) can find within themselves. Christ himself harked back to this theophany when he affirmed of himself, “Before Abraham was, I am” (John 8:58). Yet Martino quotes (without attribution) the Gnostic-mystic psychiatrist Carl Jung on the page before the table of contents: “Who looks outside, dreams. Who looks inside, awakes.” For Jung, the deepest reality was that of the Self, not of a personal-infinite God outside the self. (See my essay, “The Hidden Dangers of Carl Jung,” Christian Counseling Today; this is available on line: http://theconstructivecurmudgeon.blogspot.com/2006/07/carl-jung-beware.html.) If we look only within, we will find the image and likeness of God, but a flawed and needy image, given the ravages of the fall (Mark 7:21-23; Genesis 3; Romans 3:9-26). As Francis Schaeffer put it, we fallen mortals, rebels against God at our core, need forgiveness and restoration through “the finished work of Christ.”  (See Schaeffer’s exposition of Romans 1-8, The Finished Work of Christ [Crossway, 1998]). This cannot be found within. But if we lift “the empty hands of faith,” in Jesus Christ, we are given a new life with God, and an “infinite reference point” through which to understand ourselves and our world. The knowledge of God is the key to all other knowledge, for “the fear of the Lord is the beginning of knowledge” (Proverbs 1:7; see also 2:5). Further, in Christ “are hidden all the treasures of wisdom and knowledge” (Colossians 2:2-3).

The musical ability and near-miraculous comeback of Pat Martino are, whether he fully understands this or not, gifts from a gracious God. Further, when I met him at the legendary Jazz Showcase in Chicago, I discovered that Mr. Martino is a humble, kind, and gracious man. There was no sign of egotism, despite his prodigious and, at times, breathtaking, talents. May he grow in the knowledge of the one true God and find eternal life “here and now,” and forever (see John 1:18; 3:16-18).