Inerrancy and the Gospels: A God-Centered Approach to the Challenges of Harmonization 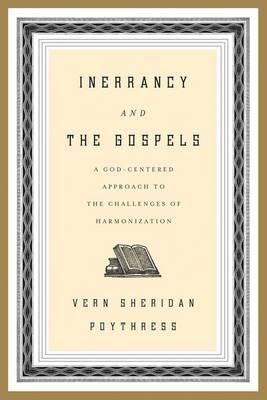 The Professor of New Testament Interpretation at Westminster Seminary, Vern Poythress, has written in enough areas to suggest he is something of a polymath.  A quick review of titles in print finds him ranging across logic, the philosophy of science, sociology, worldviews, Bible translation, a Christological view of the Law, linguistics and the sovereignty of God.  Occasionally, one encounters works more directly related to his discipline, including a study of the book of Revelation, biblical hermeneutics, and, with this volume, the issue of harmonizing the Gospels.

Because very few people tackle this concept in any detail, any new contribution to the topic proves welcome.  Most liberal biblical scholars simply warn against harmonization, even though it is a staple among classical historians in the analysis of other overlapping accounts of the same events.  A few archconservatives insist solely on “additive harmonization”—taking all the words or details in parallel accounts, adding them together and creating one, giant, composite story.  For the most part, Poythress steers a sane middle ground between these two extremes.

Before looking at too many specific examples, Poythress sets the stage for his analysis with a variety of introductory topics.  Historically, both Augustine and Calvin anticipated many of the solutions of modern scholars.  Researchers must be sensitive to the kinds of teachings or events that Jesus would have been likely to repeat and not assume two accounts are true parallels unless there is explicit contextual information to indicate it.  Readers must allow for a measure of literary artistry, theological emphasis, selectivity in detail, and freedom of wording, none of which contradicts the doctrine of inerrancy.  Commentators must approach the texts with a worldview that allows for the kinds of events recorded in them, a belief in God, and a willingness to submit to the teaching of Scripture.  We must recognize the impossibility of neutrality; if we come with a skeptical outlook we will find contradictions in many places.  If we are willing to give the text the benefit of the doubt, we will find sufficiently compelling solutions often enough to make it reasonable to suspend judgment in the handful of instances where we may not be able to find persuasive solutions.  We must acknowledge the limitations of human knowledge and the number of problems that once seemed intractable which have subsequently been solved.  As in other arenas of life, trials, in this case caused by doubt and uncertainty, are meant to engender dependence on God and humility rather than pride in our exegetical endeavors.

With these and related ground rules in place, Poythress turns to a representative cross-section of the cruxes for harmonization among the Gospels.  He begins with some comments about the Synoptic problem in general, reminding us to be cautious about just how much we can claim about the sources of Matthew, Mark and Luke.  Then he looks at examples of temporal dislocation, where no chronology is implied by the texts at hand (e.g., with Jesus’ healing the paralytic or casting the demons out of the Gadarene demoniac).  The notoriously difficult problem of the accounts of the temple cleansing in John and the Synoptics could be solved this way, though Poythress prefers the solution that Jesus cleansed the temple twice.  In the case of Jesus’ teaching in the Nazareth synagogue, on the other hand, Poythress suspects Luke has moved the account in Mark and Matthew to earlier in his narrative.

With Matthew’s apparent condensation of the two stages of the cursing of the fig tree in Mark, Poythress speaks of compression.  Matthew never explicitly says how long the episode took and the fig tree’s withering “at once” need not mean instantaneously.  Compared to the normal processes of withering, even a day’s time is startlingly immediate.  To harmonize Matthew’s Jesus prohibiting the Twelve from taking a staff for their journey and Mark’s Jesus commanding them not to take more than one staff, we should recognize that Matthew’s distinctive word (from ktaomai) can also mean “to acquire” (i.e., an extra staff), so that both accounts give the same restriction.

With the stilling of the storm, Mark’s Jesus berates the disciples for still having “no faith” even after the miracle, while Matthew’s account finds him rebuking them for “little faith” prior to the miracle.  Poythress realizes additive harmonization makes no sense here; if that were the case we would expect the earlier rebuke to be the one about having no faith.  Rather, he suspects this is language akin to a mother’s exasperated question to a child, “have you no brains?”  She recognizes the child has some brains but apparently wasn’t exercising them appropriately.  The levels of belief and trust that Matthew and Mark each see behind the expression “faith” may also vary, accounting for their slightly divergent translations into Greek of Jesus’ original Aramaic words.

New Testament citations of the Old Testament apply similar principles of selectivity and freedom, and they may also add the later authors’ interpretations and applications—all this in a world without quotation marks or any felt need for them.  With Warfield and other classic exponents of inerrancy, we must be content with the general sense of someone’s reported speech.  Or, as Poythress puts it, “We can rely on God’s faithfulness in reporting.  But we cannot really go much beyond this general principle.  We must be content with what God has been pleased to provide us in the Gospels themselves” (p. 187).  Poythress then illustrates this again with the dialogue within the varying Synoptic accounts of the rich young ruler and of the resurrection of Jairus’ daughter.

Much in this little book proves very helpful.  Poythress divides 205 pages of prose into 29 short chapters, each very clearly laid out and engagingly written.  He acknowledges the main interpretive options at each juncture, which ones he opts for, and why.  I find myself in agreement with his choices about 80% of the time.  He interacts with my chapter on harmonization in The Historical Reliability of the Gospels more often than with the work of any other single modern author, although because the author index does not index footnotes, one actually has to read the entire book in order to determine this.  And, where he disagrees with me, he has usually opted for a more common harmonization than the one I adopt, though usually without actually interacting with my rationale for my choices.

The work could no doubt have been strengthened had he stressed a little more the valid insights of redaction criticism/New Testament theology, which so often explain why the Gospel writers differ the way they do, highlighting recurrent themes important for their specific audiences.  The variations among the parallels then appear much less arbitrary.  More examples of apparent contradictions between one or more of the Synoptics and the Gospel of John could also have helped greatly, given the frequency in the academy with which the Fourth Gospel is viewed as having a greatly diminished concern with the historical Jesus than the first three Gospels have.  Those who are more evidentialist than presuppositionalist in their apologetics will take issue with some of the items in the introductory chapters, but should equally appreciate the harmonizations that Poythress offers.  We may hope that he will continue with this more exegetically based scholarship in his future publications as well; at any rate, we should be most grateful for this offering.