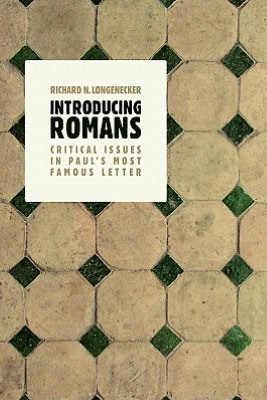 Richard Longenecker, professor emeritus of New Testament at Wycliffe College, University of Toronto, is one of North America’s premier evangelical Pauline scholars.  His magisterial New International Greek Testament Commentary on Romans, soon to appear, will crown a long and distinguished career.  This book serves as a more detailed introduction to that commentary than the series itself would allow.

Longenecker begins with largely uncontested items.  Today no serious scholar doubts that Paul wrote Romans or that he used Tertius as his amanuensis (16:22).  Since Harry Gamble’s 1977 work on The Textual History of Romans, there is an ever-growing consensus on the integrity of the epistle.  Older theories that chapter 16 originally belonged on the end of Ephesians have largely been rejected, and the existence of a shorter text form ending at 14:23 is best explained as Origen did already toward the end of the second-century, namely, due to Marcionite influence.

Scarcely more contested are the occasion and date.  Paul is writing from Corinth (or its nearby port, Cenchrea) as he gets ready to return to Jerusalem at the end of his third missionary journey and hopes afterwards to come to Rome and be helped by the Roman church’s support to then go as far to the West as Spain.  The date of composition is probably late 57.

What Longenecker labels “two pivotal issues” come next—addressees and purpose.  In each case he provides thorough surveys of scholarly discussion and the major options.  While agreeing with many that there may be a majority of Gentile Christians in the Roman church, he plays down the significance of Claudius’ expulsion of the Jews in 49, doubting that all Jewish Christians left.  He also breaks from tradition by seeing the major tension in the church as not the Jew-Gentile ethnic divide but the theological divide over a law-centered vs. law-free lifestyle, which he believes cut across Jew-Gentile divisions.  He also does not find full-fledged Judaizing, as in Galatia, to be the problem, merely a form of Christian living with a distinctively Jewish flavor, traceable to the first converts in the city, who were Jewish and perhaps even in attendance at Pentecost in Jerusalem in A.D. 30.

The two main purposes of the letter are those that emerge most explicitly from Paul’s comments in the epistle itself—to impart a spiritual gift to the Roman Christians and to seek their support for his ongoing ministry westward.  The former is reflected in the letter itself.  Paul’s detailed understanding of the gospel is the best gift he can give this church that he did not personally found.  Subordinate purposes include defending himself and his message against various misrepresentations, mediating the dispute between the “strong” and the “weak,” and encouraging the payment of legitimate taxes especially in light of recent tax revolts among some citizens after particularly rapacious practices by local officials.

Longenecker proceeds to an extremely detailed and helpful examination of the possible influence of Greco-Roman rhetoric on Romans, along with Paul’s use of more Jewish forms of writing, including his use of the Old Testament.  He observes numerous examples of oral patterns akin to what rhetors used in the delivery of speeches, while at the same time not running roughshod over the differences between oral rhetoric and written epistles.  Longenecker does not find Romans falling neatly into either forensic or deliberative or epideictic rhetoric, and he thus refrains from outlining it according to categories such as exordium, narratio, probatio, exhortatio, etc.  Neither does he find some of the recent, highly specific identifications of a specific subgenre of letter all that compelling.  Instead, he is content to refer to Romans simply as protreptic or exhortational discourse.

A little-discussed observation with respect to Paul’s use of the Old Testament is how seldom it appears in chapters 5-8 compared to the rest of the theological body of the epistle.  This notice will set Longenecker up for his final, lengthy section on the letter’s outline, in which he argues that the letter body should be divided into four main sections—1:16-4:25, 5:1-8:39, 9:1-11:36, and 12:1-15:13, with the most distinctive and emphatic section actually being chapters 5-8, written primarily for those in the church overemphasizing a law-free Gospel.  Here Paul hardly roots his remarks in the Hebrew Scriptures, at all, because they won’t be as appreciated, especially among the Gentile Christians in this group.

But before he gets that far, Longenecker intersperses less directly related topics:  textual-critical issues more generally and key theological debates.  In the latter category, he argues for “righteousness of God” as both attributive and communicative, for a basically Reformation understanding of “justification by faith,” for a partially mystical understanding of “in Christ,” for pistis IÄ“sou/Christou as containing a subjective genitive, and for an approach to the “new perspective” that agrees more with its interpretation of first-century Palestinian Judaism than with its understanding of Pauline theology.

Thorough bibliographies appear at the end of each chapter.  Longenecker has unquestionably mastered an enormous secondary literature and evaluates it very judiciously.  Still, it is stunning to see N. T. Wright’s commentary on Romans altogether absent and only three references to his work in the entire volume, with only one (in a footnote) in the section on the new perspective.   If one didn’t know any better, one would come away thinking that only E. P. Sanders and J. D. G. Dunn were the major players in this important fresh analysis of Paul’s background and message.

There is a lot of repetition in detail among chapters whose contents overlap, at times even down to the verbatim reproduction of entire sentences or the better parts of entire paragraphs.  Presumably, Longenecker envisions a significant number of individuals reading only selected sections of his book, but it is still surprising to find so much verbal repetition rather than cross-references to an earlier treatment of a topic.   I am also not as convinced as Longenecker that Robert Jewett’s identification of Romans as an ambassadorial letter is a poor fit for genre nor that as much detail on textual criticism in general (completely apart from application to Romans) is as necessary in this kind of introduction.

Longenecker himself recognizes that numerous positions he stakes out require the fuller defense that only his forthcoming commentary can generate, and he acknowledges this point repeatedly.  So we look forward with great eagerness to what will undoubtedly be a milestone in publishing at several levels—for the NIGTC series, for commentaries on Romans, and for Longenecker’s own scholarly vita.