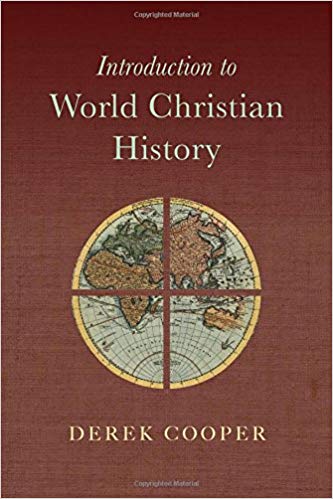 Prior to the dawn of the 21st century, most histories of Christianity tended to reflect a decidedly ‘western’ approach, often arguing that through the centuries the church moved from Asia to Europe to North America. But given the vast geographical expansion of Christianity over the past two hundred years, it’s not surprising that a new historiographic perspective was needed to tell the whole story. In his Introduction to World Christian History Derek Cooper has made a substantive contribution in this direction. His goal is to show lay readers, students and professional church historians that Christianity was always far more than a mere Euro-American phenomenon.

Cooper, associate professor of world Christian history at Biblical Theological Seminary, takes the reader on a whirlwind ride that covers two millennia of ecclesiastical, theological and missiological developments. His goal is to show not only the expansion of Christianity but also its impact on the people of every era, ethnicity and locality where it took root. To accomplish this, he uses a two-fold scheme revolving around chronology and geography. The chronology is divided into three parts: from the first through the seventh century, the eighth thru the fourteenth and then the fifteenth thru the early decades of the twenty-first century. For the geographical element, Cooper uses the United Nations Geoscheme for Nations which, while admitting its limitations, allows him to cover general areas and specific locations often neglected by prior church history texts. His survey is composed of twelve chapters, with the Contents page serving as an overview of both the ‘when’ and ‘where’ of the Faith as it expanded over time.

In addition, Cooper has chosen an inclusive approach in his definition of ‘Christian’; pretty much anyone who confessed Jesus as Savior is ‘in.’ While some readers may balk at this, it allows Cooper to describe the kaleidoscope of ‘Christianities’ that arose at various times and in different places. This has the distinct advantage of recognizing the countless linguistic, cultural and ethnic groups which adopted the Faith over its two-thousand year existence and how that has made the church a truly diverse entity. Thus, by the book’s end, the reader comes away with a better understanding of the ebb and flow of Christian history from the larger global perspective.

There are both real benefits and significant limitations to Cooper’s methodology. On the upside, he’s able to cover a vast amount of material—and terrain—in a relatively short text. To assist with this, he and his editors have included some helpful sidebars (called Trail Markers) on various topics of importance all the way from the Nicene Creed to Catholic history in the United States. In addition, he successfully demonstrates the global ethos of the Christian Faith. As Jesus intended, it has now gone to the ‘ends of the earth’ (Acts 1:9), even to such far off places as Oceania. A final strength is that Cooper writes clearly, with an engaging style that keeps the reader interested each step of the way. For all these things, he is to be commended.

But the book presents some daunting challenges as well. Perhaps the greatest of these is the sheer volume of material that has to be analyzed, synthesized and then communicated in under 300 pages. Can we really get an accurate feel for European Christianity from the 15th to 17th centuries, specifically the Protestant Reformation, in just twenty-one pages? Can the Islamic obliteration of the Faith from Baghdad to Spain in under two centuries be adequately explained as concisely as the author attempts? And what about the enormous influence Enlightenment thinkers exerted on Western Christianity in the 18th and 19th centuries? Can this be clearly understood at the 20,000 foot level? I realize this sounds unfairly critical and it almost certainly is. As I was reading this book I often paused to admire what Dr. Cooper’s has tried to accomplish here. Yet, time and again, I grew frustrated with his obvious need to move on to the next place, subject or development as it related to the spread of the Gospel.

Summary volumes like this are both impressive and important but I would suggest they be used in a selective manner. This one may be most helpful as a supplemental text in an undergraduate course on the history of Christianity or as a guide for laypeople in a church-based study group. Without question the strength of its prose and the sheer amount of church history that Cooper covers will benefit numerous students and other followers of the Savior. At the very least, it will demonstrate to its readers that while Christianity was originally an Asian religion from the first century A.D., over time it moved in every direction to eventually encompass the entire globe.