James: A Handbook on the Greek Text 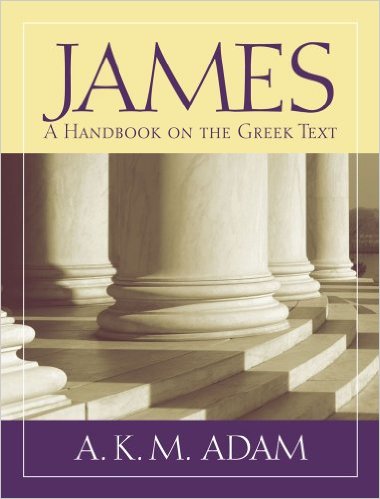 This little book continues the purpose and format of Baylor Press’ ongoing series of handbooks on the Greek text of the New Testament. These volumes fill the niche between a simple parsing guide (or its electronic equivalent) that merely gives labels to grammatical forms, and a full-fledged commentary. It will prove very handy to preachers who have studied Greek in the past, but whose grasp of the forms might have gotten a bit rusty. But more than merely labelling forms, in this book (as in the others in the series), Prof. Adam elaborates the significance of the features in the Greek text of James that he believes can help readers understand the text better.

The general editor of the series, Martin M. Culy, explains in the introduction how the books are envisioned and what they will and won’t do. He hopes that readers will gain a new appreciation for the wealth of insight that comes from grappling with the intricacies of Greek grammar–and expects that readers will be surprised at times by what they discover (particularly those who have not studied Greek recently or kept up with recent developments in linguistics as applied to the study of Hellenistic Greek). For example, readers will not find the author labelling some “uses” of the aorist tense as “ingressive,” “gnomic,” or “constative,” etc.–often staples of Greek study in the past. Embracing linguistic analysis as fundamentally descriptive, the authors, like Adam here, uses tense names, e.g., aorist, but look to the context to determine any specific nuances to the uses of that tense in a specific context. In other words, recognizing there is no such thing as an “ingressive aorist” form per se, there’s no warrant for giving a specific use that label.

Another departure for some who studied Greek in the past is the abandonment of the term “deponent” to describe certain middle or passive verb forms. Adam follows the current understanding that if a verb has a middle form, it ought to be understood as having a middle meaning (not active meaning though middle in form). Of course, at times a middle form merely indicates that a verb is intransitive. More frequently, the middle form is required since the meaning of the verb itself (the semantic value) places focus on the subject. For an example of this point consider the sentence: “The professor bathed.” In this sentence, “bathed” might take a middle form since the verbal action focusses on the professor.

Dr. Adam, currently Tutor in New Testament and Greek at St. Stephen’s House at Oxford University, has written a number of well-received books in the broad field of biblical interpretation. This particular volume begins with Adam’s consideration of the standard introductory issues for a New Testament epistle. His judgments are guarded but judiciously explained–albeit in the small number of pages devoted to introduction. He thinks the author “James” could very well be the brother of Jesus. James certainly fits in the world of Judaism contemporaneous to early Christianity. He suspects James knew of traditions, either first-hand or by hearsay, that eventually found themselves into Matthew’s Gospel (which accounts for the strong correlation of James’ epistle with the Sermon on the Mount). Adam points out other interesting features of the epistle, particularly focusing on James’ central themes. He thinks James uses á¼€νá½µρ and á¼„νθρωπος synonymously though James uses á¼€δελφá½¹ς for both women and men.

As to the Handbook itself, it follows the pattern for the others in the series. A verse or section is given in English translation, after which the author proceeds verse-by-verse with the Greek text. Under each verse the author cites key terms that he believes merit further analysis and explanation. Most often that involves making grammatical observations but also includes more substantive comments that approach the observations that standard commentaries make. At times these comments might encompass only a few lines; at other times, they expand to as much as half of the page. Where he deems it appropriate, Adam also cites other sources, e.g., lexicons such as BDAG or Louw and Nida, grammars such as Wallace, major commentaries, and other books, also listed in the helpful bibliography (49 entries) at the end of the book. He even cites some parallels in the Church Fathers for additional insight into word meanings or uses.

This will prove to be a useful book for students working on their exegesis of passages in James as well as pastors or teachers who want to take the original language of the text of James seriously. Many commentaries do not get as specific as Adam does in explaining most of the salient features of the Greek language that James uses. But more than merely giving grammatical labels, he unpacks for readers what those categories mean for the interpretation of James’ epistle in the contexts of the letter itself.