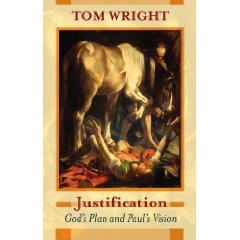 Over the past few years Tom (N. T.) Wright has been one of the most prolific and influential biblical theologians in the world, producing numerous books and articles for both the academy and the layperson.  His magisterial Christian Origins and the Question of God has shown him to be a great force in the field, while also giving rise to many smaller publications which are designed to relate his work to a wider audience, explore variation and nuance within his larger theology, and to further interact with the ongoing discussion.  It is this latter category which provides occasion for his most recent publication, Justification: God’s Plan and Paul’s Vision.  Written largely as a response to the critique offered by John Piper’s The Future of Justification (Wheaton: Crossway, 2007), Wright provides here further clarification to his previously stated views of Paul – all within the realm of the movement now known as The New Perspective.

Chapter One introduces the nature of the debate between Wright and Piper (and their respective surrounding camps).  Wright presents himself with an intentional humility, often taking the opportunity to lighten the tone of the discussion while other times making very pointed and direct statements affirming the validity of his position.  Perhaps his most fundamental starting points is found with, “But we are not the centre of the universe.  God is not circling around us.  We are circling around him” (7, emphasis in original).  Indeed, for anyone who has been concerned with the overly individualistic approaches to Christian spirituality in our culture this immediately provides some fresh air into the debate.  Functionally, it allows Wright to make the claim that too many of the discussions on justification have had the wrong starting place (7), thus making the individual to be the most central piece of salvation.  And this certainly goes along well with Wright’s previous work on Resurrection, which strongly asserts more than individual salvation as the entire cosmos is being renewed and restored (cf. 8-19).

Chapter Two is entitled Rules of Engagement, which is essentially an opportunity for Wright to set forth his own methodology.  (I doubt this was meant to be taken as an agreed-upon approach between Piper and Wright.  In fact, it is here that the two begin to significantly part company.)  The fundamental aim here is to determine the relationship between text and doctrine, a point at which Piper challenges Wright most directly.  Just how much are interpreters to allow the doctrine of the church, specifically the Reformers, influence their reading of the text?  Although he does assert a certain level of respect for the tradition of the church, Wright’s comments here focus more upon the need to understand the first century context over-and-above that of church history and tradition (33).

The third chapter contains a brief overview of Wright’s synthesis of Jewish belief during the Second Temple period, with his now-famous assertion that most Jews believed themselves to be in an ongoing exile and waited for the final restoration of Israel (41).  That many of the Jews at this time believed that they were in the midst of a great narrative of faith thus becomes Wright’s starting point, and he places the discussion of justification into this context, arguing that ‘God’s righteousness’ is seen in his fidelity to the covenant: “. . . God’s way of putting the world right is precisely through his covenant with Israel” (46, emphasis in original).  Here is perhaps the most pointed response to Piper, claiming that he works with a flawed understanding of ‘God’s righteousness’ by ignoring the Abrahamic covenant (47-48).

Chapter four is perhaps the most intricate of the introductory material as it seeks to lay out definition for both individual terms as well as conceptual ideas.  It begins by seeking to define the ‘doctrine of justification’ and leans on A. McGrath’s work on the historical development of the concept, claiming that the actual doctrine has become largely detached from its original context and meaning.  Thus, it has taken upon a life of its own in the history of the church (60).  Certainly this is the case for many aspects of the Christian faith, but here Wright maintains the implications are severe, it changes the direction of salvation from a kingdom movement to individualistic spirituality.

The chapter continues on to introduce the meaning behind justification, as it is taken from the ancient court and designates the status of the individual in the eyes of the law.  This is an important aspect of Wright’s perspective on Paul as it designates a status to the individual and brings them into the covenant community, “It is the status of the person which is transformed by the action of ‘justification’, not the character” (70, emphasis in original).  From here, Wright then spends the remainder of the chapter inserting this idea into the covenant story of Israel, now identified by Paul as being fulfilled in the Messiah.

Chapter five begins the second section of the book, which is devoted to exegesis of the Pauline material on justification.  Wright begins with Galatians, taking up with the notion of justification as right standing before the law as key to understanding Paul’s argument.  He asserts that justification is membership into the family of believers, with resulting works as “. . . the assured status of belonging to God’s people, separated from the rest of humankind” (96).  It is in this way of separating faith and fruit within Pauline thought that Wright understands the new way in which Paul regards salvation and the law (how the works of the law do not save).  At the heart of his reading of Galatians, Wright sees the covenantal story of Israel being fulfilled in the Messiah to bring about unity through the Spirit.  And as believers are brought into God’s new day, so should their lives exhibit the marks of faithfulness.

Chapter six is labeled an Interlude, mostly for its brevity on discussing each of Philippians, Corinthians, and Ephesians.  Though there is fruitful discussion to be had in each of the Pauline literature on justification, the majority of folks coming to this will be familiar with 2 Corinthians 5:21.  Wright addresses the believers becoming the righteousness of God as the embodiment of God’s covenant faithfulness as his fellow workers” (141-143).

In keeping well with the natural reading of Ephesians’ emphasis on community, Wright takes his understanding of justification and places it as a necessary component to ecclesiology.  That is, as redemption and healing occur in the Messiah so is the church assembled as a sign of the defeat of darkness (148-149).  Thus, the believers are fellow-heirs as they are part of the same body through the process of justification.

Chapter seven demonstrates that all roads do seem to lead to Rome (cf. 155), as Wright devotes the longest chapter of his response to exegesis of this profound letter.  Whereas in previous publications Wright has focused on a handful of chapters of Romans, here he walks through the letter front-to-back with emphases of faith and salvation close at hand.  The author asserts that Paul’s discussion (specifically Romans 2:1-16) is built on defining justification as “future judgment” and “present verdict” (165).  That is to say, the future of the believer is demonstrated by the current status of the believer as a participant in the covenant community.

Wright’s claim is that Paul is reinterpreting the narrative of Israel around Messiah, but is keeping the story nonetheless.  He does so by speaking of “the single-plan-through-Israel-for-the-world” which began with Torah and covenant, but which now has reached climax in the work of Messiah (171).  There is great strength in approaching Romans in this regard, as it keeps Paul intimately connected to his Jewish context (cf. esp. 170).  Wright is also able to keep his emphasis on exile in view here and suggest that justification works within the concepts of restoration for Israel – which has become an area of much scholarly interest as of late.

To boil down a rather intricate reading of justification in Romans, Wright sees that the heartbeat of the Christian faith is found in Christ’s death and resurrection status now being reckoned to the status of the believer (205, cf. Romans 6).  This he ties directly to two final concepts, ecclesiology and eschatology, both which form a strong part of his defense as he has been charged at undermining these aspects of theology elsewhere.  Trying to get at what salvation means, Wright stresses “. . . the present status of all God’s people in anticipation of the final judgment” (211, emphasis in original).

To summarize the book as a whole, those who are familiar with Wright’s work will not find anything particularly new in this offering.  Yet, the occasion to respond to those critical of the New Perspective movement does provide opportunity for Wright to clarify and refocus some of his assertions regarding Paul.  Perhaps one of the most significant contributions from Piper’s challenge to Wright is that it has driven the discussion of justification a bit further outward in regarding the implications of salvation to the life and ministry of the church.  Both of these scholars work full-time in pastoral ministry, so it should be interesting to see where the next steps take the discussion.  And while some of the book might have been more economical with its words (but then again, this is Tom Wright), it should be highly recommended for those seeking to keep up with the noise surrounding the New Perspective on Paul, as well as those who are seeking a more complete perspective on justification as a whole.