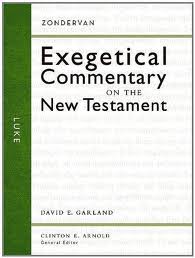 This is the fifth volume to appear in this newly emerging series and it upholds the marvelous standard of its predecessors.  Garland, Dean and Professor at Truett Seminary, Baylor, has already distinguished himself with excellent commentaries in varying series on Matthew, Mark, 1 Corinthians, 2 Corinthians, and Colossians and Philemon.  This may be his best offering to date.

In keeping with the format of the ZECNT series, introductions and discussions of theology are brief.  Garland tentatively assigns the Gospel to its traditional author, sometime between 75-85 and wonders if he might have been Jewish, even while clearly familiar with and writing for Hellenistic-Christian audiences in the form of Greco-Roman historiography.  His most important themes are the “divine must,” “universal welcome to outcasts, sinners, and Gentiles” (pp. 974-75), prayer, salvation, prophetic Christology, and the gospel’s geographical movement.

Also in keeping with the format, Garland begins the treatment of each pericope of preachable length with a prose overview of the literary context, main idea, structure and literary form, and exegetical outline.  Garland’s main ideas are consistently concise, yet thorough, and reflect careful thematic analysis and subdivision of the text.  Combined with choice homiletical reflections interspersed in the “explanation of the text” and especially the “theology in application” sections, one can easily envision Garland having carefully studied the contents and structure of the Gospel inductively and having preached through the entire Gospel, as well as having interacted with an astonishingly wide swath of secondary literature, much of it quite recent and tucked away in little known sources.

References to the temple in the opening and closing pairs of chapters create an inclusio, highlighting that forgiveness of sin now comes through Jesus and not the temple cult.  Luke 1-2 are dominated by the comparisons and contrasts between the conceptions and births of John the Baptist and Jesus. Chapter 2:2 is best translated, “This registration was before Quirinius governed Syria” (p. 117).  The “inn” of 2:7 should be a “guest room” (cf. the updated NIV) and the “manger” is a “feeding trough.”  Upton Sinclair inquired about Christmas already in 1927:  “could Satan in his most malignant mood have devised a worse combination of graft plus bunkum than the system whereby several hundred million people get a billion or so gifts for which they have no use, and some thousands of shop clerks die of exhaustion while selling them, and every other child in the Western world is made ill from overeating—all in the name of the lowly Jesus” (p. 129)?

John the Baptist in Luke 3 stands out because of his unusual call that everyone in Israel immerse themselves for repentance.  Jesus’ temptations in chapter 4 find him successfully rejecting the devil’s ploys that he abuse his power—the perennial source of great human evil.  The sermon at Nazareth and the unsuccessful attempt to destroy Jesus afterwards function programmatically to foreshadow his death and resurrection.  Jesus calls his disciples (5:1-11) to fish for people.  Today many American Christians “give in to theological atrophy and to buy in to pseudo-evangelical kitsch and lose their missionary zeal.  Missionaries from the third world will carry on the mission to cultures sapped by materialism, skepticism, and secular schools of thought” (p. 233).

Much like the thesis I argue at length in my Contagious Holiness: Jesus’ Meals with Sinners, Garland sees in Jesus’ miracles that “healing trumps potential contamination” (p. 245).  Advancing God’s kingdom means changing one’s economic priorities and abandoning the evil and hypocrisy that those in positions of religious power so often disclose.  Jesus’ great sermon (6:20-49) reminds us that the vulnerability of the poor often leads them to trust God more willingly than the rich and powerful.  The contrast between Simon the Pharisee and the sinful woman (7:36-50) teaches the truth “that we all start out with an F and work it into an F-.  The only remedy is divine grace and the response of faith that trusts God’s salvation through Christ” (p. 332).

Jesus’ conquest of the wind and waves, like his exorcisms, rebukes the demonic in the world.  But Jesus has not come to model a triumphalist approach to life; he must suffer and die to produce a new exodus (9:51).  Here begins Luke’s distinctive travel narrative, which will last until 19:44 and alternately highlight christological and ecclesiological issues.  The sending of the 70/72 in 10:1-24 foreshadows the ministry to the Gentiles.  The parable of the Good Samaritan teaches enemy love, not just humanitarian kindness.  With Anne Lamott, “You can safely assume you’ve created God in your own image when it turns out that God hates all the same people you do” (p. 449)!  Just as I juxtapose Proverbs 30:8-9 and a Latin-American prayer for justice in my discussion of the Lord’s Prayer (Luke 11:1-4) in my Neither Riches nor Poverty: A Biblical Theology of Possessions, so does Garland.

Garland gives no methodological guidance for how to determine the points of the parables that dominate chapters 12-18 or how many each passage teaches but his exegetical instincts repeatedly prove shrewd.  The great banquet in 14:15-24 teaches both that no one ever saves themselves—it is all due to God’s grace—and that anyone who is lost has only damned themselves through their evil deeds.  The demand of discipleship is total (vv. 25-35), countering any spirit of autonomy that wants to resist God’s will.  As with the prodigal son (15:11-32), real repentance feels like death, especially to self.  The parables of chapter 16 teach that “money is akin to a demonic power that can mesmerize us with its attractions and claim our service” (p. 653).  Jesus’ command to the rich young ruler (though rejected) and Zaccheus’ voluntary promise (18:18-30; 19:1-10) disclose the antidote—giving large amounts of it away to help the poor and advance the cause of the gospel—as Luke’s patron Theophilus is also modeling.  Nor dare one fall back simply on tithing as the solution, as the example of the widow’s mites (21:1-4) demonstrates.  “Tithing is not a New Testament concept, because it allows one to ignore how much one keeps” (p. 820).

Garland’s humor offers nice comic relief when we read that “the [prediction of the] rooster’s crow matches Peter’s cocky boastfulness” (p. 870, under 22:33-34) and that “its raucous cry is an ironic rebuke that makes a sad joke of Peter’s cocksure assertion that he would follow Jesus to prison and death” (p. 892, under 22:60).  More seriously, throughout the Passion Narrative, Luke underlines Jesus’ innocence.  But he does not disavow Jesus’ atoning sacrifice, as has often been claimed.  Luke 22:19b-20 was originally in Luke’s text; even if not, Acts 20:28 clinches it.  Jesus’ words to the criminal on the cross next to him assuring him of his imminent presence in Paradise (23:43) “turns on its head a view found in the rabbinic literature that different levels exist in paradise and that persons will be assigned to a billet appropriate to their rank or achievements” (pp. 926-27).  The resurrection must be understood as bodily (24:30), but the climax of Luke’s Gospel is the ascension, which represents Jesus’ exaltation and which will feature even more centrally in Acts.

As in any work this long, one can always find interpretations to dispute.  Luke 2:37 is better translated, with the updated NIV, as “[Anna] was a widow until she was eighty-four” rather than imagining her living eighty-four years after a seven-year marriage (v. 36).  Bailey’s well-known transformation of anaideia from shamelessness to avoidance of shame in the parable of the friend at midnight (11:5-8) simply does not work linguistically or contextually, as I have shown in my Interpreting the Parables.  At first, Garland claims the appeal to rejoice is the main point of all three parables of lost things in chapter 15 (p. 614) but later quotes Manson approvingly that the point is not so much about rejoicing as the divine love that seeks for the sinner who needs to repent (p. 618).  The latter interpretation fits better than the former.  Garland’s case for the “lord” of 16:8a being Jesus, in the parable of the unjust steward, is strained and unconvincing; but not as implausible as his interpretation of the pounds or minas (19:11-27), in which he takes the king not, as with most, as an a fortiori symbol for God in his saving and judging activity, but merely as a wicked human king whose behavior is to be eschewed.  This approach is all the more puzzling when we see that Garland does accept the conventional allegorical interpretation of the very similar parable of the wicked tenants (20:9-19).  Finally, it is unlikely that “this generation” in 21:32 refers to the end-time generation of Jesus’ parousia, since every other occurrence of this expression in the Gospels refers to the lifetime of Jesus’ disciples.

These few objections scarcely detract from the compelling exegesis that dominates Garland’s commentary.  Every paragraph is nicely crafted; some are literary gems.  Garland pays attention to significant grammar, as per the series prospectus, even though this features less significantly in narrative than in didactic literature.  While I would never recommend any preacher to follow just one commentary on a given passage of Scripture, if someone had only Garland to consult, they could preach a masterful series at length on this Gospel.  Expositors will be in his debt for a long time to come.