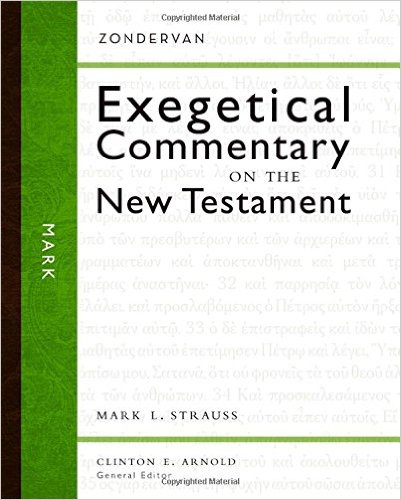 This volume contributes to the ongoing Zondervan Exegetical Commentary series which interacts closely with the Greek text. The author of this volume, Mark L. Strauss, is already well known for his work on Jesus and the Gospels, and is well-suited to write this commentary. The Introduction to the volume brings together Strauss’ conclusions on a variety of typical introductory issues related to authorship, background, genre, and literary structure. There are no surprises in his treatment of these issues. Strauss finds a basic twofold division in the Gospel: Jesus as the mighty Messiah and Son of God (1:1-8:30); and Jesus as the suffering servant (8:31-16:8). After surveying a variety of approaches historically to treating Mark’s Gospel – source, form, redaction, sociological, narrative –, Strauss claims that to be eclectic, drawing from the best of all these approaches. With regard to genre, while seeing parallels with ancient bioi, he thinks that ultimately the Gospel is unique in its origin and content. Strauss concludes that most likely Mark was written by John Mark, and he finds no good reason to doubt Papias’ testimony that Mark was Peter’s interpreter. According to Strauss Mark was most likely addressing Christians in Rome. Further, he finds a plausible date in the late 60’s just prior to the destruction of Jerusalem in AD 70. Most likely, Mark wrote for a variety of purposes that can be subsumed under two broad theological categories of Christology and discipleship. Regarding Mark’s style, Strauss draws particular attention to the so-called historical present tense, his use of colorful and vivid detail, and his use of intercalation (Mark’s well-known propensity to “sandwich” one episode in the middle of another [see 5:21-43]), and the presence of triads.

To give just a sampling of some of the conclusions that Strauss arrives at in his commentary:  In 2:23-3:6 Strauss concludes that the Sabbath is fulfilled eschatologically in Christ, though the principle of rest in the midst of a busy life schedule is still valid. In the parable of the sower in 4:1-20, the “mystery” is “that the power and presence of the kingdom of God are breaking into human history through the words and deeds of Jesus the Messiah” (p. 184). Jesus’ healings, exorcisms, and forgiving sins are signs of the presence of the kingdom. The ina clause in v. 12 should be interpreted as expressing purpose, but it is a judicial pronouncement given as a result of the prior rejection of the Jewish leaders in chap. 3. Nor is the judgment necessarily permanent. According to Isaiah 6, the text that Jesus quotes here, there is restoration after judgment. Strauss may too quickly dismiss notions of chaos and the realm of the demonic for the calming of the sea in 4:25-41, though it is not as clear in Mark as it is in Matthew. Strauss concludes that the feeding of the 5000 (6:30-44) is for the Jews, and the feeding of the 4000 (8:1-10) for the Gentiles (pp. 330-31).

One crucial issue in interpreting Mark has to do with where it ends. Strauss summarizes the evidence for and against the shorter ending (16:8) and the longer ending (vv. 9-20) and concludes that there is slightly more advantage to thinking Mark intended to end his Gospel at v. 8, based on external, transcriptional, and intrinsic evidence. The effect is that Mark ends his book with a call to faith and discipleship.

Overall, this commentary will provide a further, helpful resource on interpreting the Markan account of Jesus. To be particularly welcomed are the discussions of the literary context of each section, as well as a treatment of its theology. Also helpful is the grammatical type layout under the “Translation” for each section, though I don’t know that it is equally helpful for both narrative and discourse (speech) sections. It is also not clear that Strauss has as effectively implemented his “eclectic” approach to Mark’s Gospel as he could have, especially in the area of narrative criticism. One area that he failed to take advantage of is recent work on the “historical present” in light of verbal aspect theory and discourse analysis studies. Some other shortcomings probably owe more to the format of the series. But all in all, Strauss has provided us with a judicious commentary on Marks’ Gospel that is sensitive to its historical and theological dimensions, which center around who Christ is and what it means to follow him. It should be one of the commentaries that teachers, pastors and students reach for in any serious study of Mark’s Gospel.