Mind Your Faith: A Student’s Guide to Thinking and Living Well 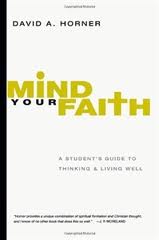 Any social movement that cannot articulate and defend its basic principles to itself and to outsiders teeters on perilous ground. This educational mission requires that the young (the next generation of leaders and followers) be amply instructed such that they can maintain and advance their beliefs in the larger culture and before the hardest critics. Without these conditions, the social transmission of the beliefs of any community will break down and eventually fail to exert any concentrated cultural influence.

If the above paragraph seems like dry sociology, the reader has not applied it to Evangelicalism and Christianity more broadly. Study after study shows that those raised in evangelical settings tend to compromise or lose their convictions if they attend college (although they may return later, especially upon starting a family). This is because the plausibility structure (unspoken and spoken beliefs and social practices) of the academic world are deeply secular. The assumed and operational worldview is naturalism: the belief that everything can be explained by chemistry, biology, and physics without any appeal to God or a sacred dimension. This is seldom overtly stated, but is presupposed and insinuated everywhere. I know, having three degrees from secular schools, having been a campus minister for twelve years, and having taught as an adjunct at several secular schools. For example, one secular philosophy professor begins his class by saying, “Philosophy is about reason. Religion is about faith. Since this is a philosophy class, we will not be discussing religion.” Well, well; that was simple—and stupid, since there are a plethora of religious philosophers giving arguments for their varied beliefs. (Suffice it to say that this is not how I teach philosophy in a secular environment.) But this entrenched secularism is what many students—Christian or otherwise—face in the classroom. Most are helpless to resist. If so, the cause of Christ is constricted, not by overt persecution, but by a woeful and inexcusable unpreparedness.

David Horner, Professor of Philosophy and Biblical Studies at Biola University, has done something about this unhappy and serious situation. Mind Your Faith exhorts and instructs Christians to thrive intellectually in college, by developing a Christian worldview and godly habits of the heart. He divides the book into three sections: Mind, Faith, and Character.

In the section Mind, Horner develops a theology of the mind and the value of thinking well for God; explains the nature of truth (correspondence to reality); articulates the nature of knowledge (justified true belief) and how to attain it; clarifies how to find common ground with unbelievers; and (very importantly) makes known the nature of the Christian worldview and worldview thinking. He does all of this clearly, cogently, and persuasively, such that the most ignorant reader will be carried along by the interesting prose and the more learned reader will still be interested and learn new things (as it was for me, an old philosopher).

The section on Faith explains the meaning of faith (not blind or without reason), how to handle doubts, and the credibility of faith (or apologetics from a worldview perspective). Here the seasoned professional gives sagacious advice to his students about a topic so often and easily misunderstood. From years of teaching in secular settings and the church, I know that it is too common that in the minds of many, faith is separated from or even opposed to reason. Horner refutes this charge, one that so eviscerates Christian witness on campus and elsewhere.

The last section addresses godly character. It discusses the Christian moral vision in general and how it relates to college life and employs the specific example of the La Chambon community in France that courageously saved so many Jewish children during the World War II. Horner wisely draws on the significant writings of Phillip Halle for much of his fine exposition.

The book closes with a substantial bibliography of sources—comprised of both books and on-line materials—related to its subject matter. This is a vital aspect of the book, since one book (however excellent) cannot be a stand-alone resource on matters of this weight. Further, good books, such as Minding Your Faith, should encourage one to read other good books on the same or cognate topics. If Christians are to out-think the world for Christ, they must be deeply and devoutly literate.

Minding your Faith will serve both high school and college students who want to advance the mission of God in the world by knowing God, discerning the times, and making God known to a rebellious world through a rational faith and godly living. I hope and pray that it will be so used in Christian education and by individual students.