Obadiah: the Kingship Belongs to YHWH 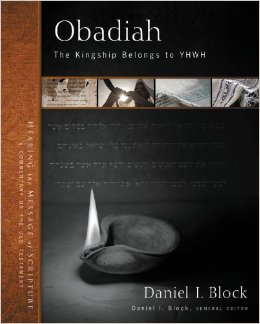 This is the first volume to be published in the Hearing the Message of Scripture series, of which the author is the general editor. The Series Introduction (pp. 9-14) explains that it will focus on the theological message of the biblical text and how this is communicated through its rhetoric features. Attention is given to lexical, literary, and theological connections with other Old Testament books and broader themes of biblical theology across the canon.

The format of these volumes is helpful. A solid academic bibliography is placed after the Series Introduction, the Author’s Preface, and Abbreviations list. The author’s translation and the Introduction to the biblical book follow. The layout of the commentary is very reader friendly. There are two columns of comments in a font size that is easy on the eye, with detailed footnotes at the bottom of each page. Commentaries close with Scripture, Subject, and Author indices.

Block provides quite a lengthy introduction to this briefest Old Testament book of just twenty-one verses (pp. 21-46). He surveys the multiple theories about Obadiah’s historical background and provenance, settling on the period after Jerusalem’s fall in 586 BC and Edom’s defeat by Babylon in 553 BC. (Interestingly, there is no mention of the recent and very important archaeological finds at Khirbat en-Nahas in Jordan, which are reshaping traditional understandings of the history of Edom.) Much of the book is presented as if it were addressed to Edom, who is roundly condemned for betraying Judah when Jerusalem was ransacked by that empire’s armies. The real audience, behind this hypothetical one, is the Jews who had experienced the war. The prophetic message is designed to convince God’s people to trust in his matchless sovereignty (hence the subtitle to this commentary: The Kingship Belongs to YHWH). One day divine justice would prevail over the Edomites and the nations of the world, and Yahweh would be faithful to his promises to restore his people to the land.

In his Introduction Block stresses (and lists) the intertextual connections between Obadiah and other prophetic literature. While these are most clearly evident with Jer. 49:9-10c, 14-16, there are many more (pp. 38-41). Observations on such links are a major component of his comments on the text of Obadiah. Block believes that the book’s climax is in vv. 15-18, most specifically at v. 17, with the sharp reversal of fortunes (this is marked syntactically as well). This word of hope, he says, is extended into vv. 19-21. This rhetorical claim can come across as a bit confusing, as Block will say of this final set of verses, “The book climaxes with a glorious declaration of righted wrongs and the triumph of divine compassion” (p. 46). The reader wonders where the actual climax resides. Is it based on textual matters of discourse analysis (v. 17), or is it found with the theological declaration at the end of the book that “dominion will belong to YHWH” (Block’s translation)?

The Series Introduction says that these commentaries will highlight only the most significant passages, but Obadiah is short enough for Block to be able to offer detailed explanations of each verse. The translation of the five sections of the biblical book (vv. 1; 2-10; 11-14; 15-18; 19-21) appears in the form of a syntactical outline, which is matched in another column by a thematic breakdown. The exposition of each passage begins with a discussion of the Main Idea, its literary context, structure and literary form. The textual comments are of a technical nature, highlighting Hebrew grammar, syntax, and vocabulary. As mentioned earlier, Block constantly points out parallels between Obadiah and other Old Testament books, leading him to conclude that the prophet was well-versed in his theological traditions. Occasionally Block provides useful charts that present these intertextual echoes, along with observations on how the language of these texts differs and why that might be the case. He deals well throughout with the key theme of the Day of Yahweh, and he walks the reader through the shift from the days of destruction that Jerusalem had suffered (vv. 11-14) and which was imminent for Edom (vv. 1-10) to the announcement of a day in the far future that is coming upon all nations (vv. 15-21). Block also explains the notion of poetic, retributive justice that Edom and the nations will suffer: actions committed against someone else will be experienced by the perpetrator.

There are several interesting interpretive matters in Obadiah that always deserve attention. I mention but two. One is the sequence of eight verbs in vv. 12-14, which have the sequence of ’al [“not”] + jussive verb + bÄ•yôm [“on the day of”] + descriptor. The expectation is that these lines prohibit future actions, but in the text they depict what already had happened. Accordingly, in their translations some versions have a past nuance (he cites the NRSV; cf. CEB). Block opts to align his rendering more with the usual sense of this construction, as “prohibitions with ongoing force” (p. 77): “you should not…” (cf. NASB, HCSB, NIV 2011).

A second issue surfaces in the last section of the commentary, “Canonical and Practical Significance” (pp. 105-16). Here Block explores how in the Bible Edom is representative of the nations that turn against God’s people and of violent humanity in general, and how the rule of God is demonstrated in judgment (an unpopular notion these days). However, it is to the last topic of this section (“Christ the King in Obadiah”) that I direct some comments. On the one hand, Block rightly observes that Obadiah, unlike other prophetic texts, does not specifically reference a Davidic Messiah; instead the book exalts the kingship of Yahweh. He then argues, rightly so, that in the New Testament Jesus is presented as lord and king over all.

On the other hand, the closing paragraph states, “In Christ not only the prophecy of Obadiah, but all of God’s promises to Israel are fulfilled” (p. 115). One is left to ponder the full meaning of these words. While all agree that Jesus, God incarnate and Messiah, is the culmination of Old Testament prophecies, does this mean that all the particular hopes in those texts regarding the restoration of the Jewish people in their ancient land are now void, spiritually realized within Christ and his church without remainder? Of course, there are some Christian traditions that argue as much. But does this do justice to the commentary’s claims that the prophet Obadiah argues that Yahweh will bring to pass in history and concretely all the promises to his chosen people and that Zion would be exalted among all the nations? Does Jesus’ exaltation require the redefinition of the authorial intent of these promises?

This is a very good and well-informed commentary, full of careful exegesis by a passionate Old Testament scholar with theological acumen and a pastoral heart. I applaud Hearing the Message Series’ concentration on the rhetoric (syntactic, structural, and thematic) of the biblical text. The discussion of canonical importance and developments adds theological wait and relevance. I look forward to future volumes.