One Bible, Many Versions: Are All Translations Created Equal? 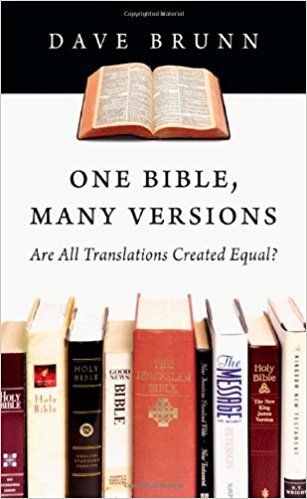 After I graduated from college I spent several months serving at the Christian Servicemen’s Center in Naples, Italy.  There, in addition to offering home-cooked meals and Bible studies to the men and women stationed in Naples and on the ships that came to port, we often had various interesting and challenging discussions.  One of the evangelical churches in the area was a fundamentalist, King James Version only church, and many of the folks attending there were young Marines who were very adept at following strong leadership.  At the time I was using the Living Bible for my Old Testament, and the recent New International Version of the New Testament.  I distinctly remember one conversation with a young Marine who was trying to convince me of my sin in using a Bible other than the King James Bible.  My concern at the time was not to convince him that he was misguided but to figure out how much he actually understood of the antiquated English of the King James Version.  I looked up a particular verse and asked him to simply tell me what the words meant.  His answer was to continue to repeat the words rather than defining them, showing me that he didn’t understand what he was reading.  I tried to show him that the important thing was not which version of the Bible people used, but whether they would actually read and understand the one they had.  I failed miserably.

Interestingly enough, 35 years later the same debate continues. While the number of translations have multiplied, controversy surrounds the questions of which English Bible translation is the best, the truest, the most literal, the most readable, the most accurate.  Various translations claim to be the most faithful to the Greek and Hebrew originals. And the adherents of those more “literal” translation philosophies hurl accusations at those who prefer a more functional equivalent approach, that they are being unfaithful to the original texts.

Dave Brunn, veteran Bible translator with New Tribes Mission in Papua New Guinea, tries to bring perspective and peace to this heated debate. His stated purpose is to promote unity between those with differing standards of Bible translation.

This book takes its place in the context of a long and often bitter debate. As readers, we’re stepping into a conversation that has been going on for decades. Brunn does a great job of showing that those holding competing positions on the possibility and desirability of a literal translation are not as far apart as they seem to think.

Brunn expresses appreciation for many different translations, and claims to use them all on a regular basis. He argues that an “essentially literal” philosophy of bible translation is neither the most faithful to the original scriptures nor the one that most upholds a high view of the plenary inspiration of scripture.

He does this by demonstrating, through extensive comparisons of multiple English versions, that Bible translation is an inexact science, and that translators of different versions are inconsistent in their application of their stated translation philosophies. He states, “It appears that the one thing that is truly consistent in Bible translation is the fact that it is impossible to be truly consistent” (132). He chooses the New American Standard Bible (NASB) and English Standard Version (ESV) for his primary examples on the literal side, and New International Version (NIV) on the dynamic equivalence side. The King James Version is used for comparison throughout.

All books on bible translation seem to deal with common themes, and this one fits right in. Translation is difficult and messy. Interpretation is an inevitable aspect of translation. Translation theories always have to be shaped and tempered by actual translation practice. In that respect his conclusion is that, in practice, everyone, regardless of their translation philosophy, affirms these principles. “My work as a translator brought me to the realization that literal Bible versions in English often take turns being the most (or least) literal among their peers…As I continued comparing English Bible versions, I was shocked to find that not only are literal versions not always literal, but sometimes the notably nonliteral versions are more literal than the so-called literal ones” (31).

After making his case in the opening chapter that the Bible should be a force for unity rather than division, he jumps into various issues related to translation itself. In successive chapters he deals with questions of the relationship between form and meaning, the tension between translation ideals and the reality of translation, examines the idea of word for word translation as related to translating concepts, and develops criteria for evaluating the accuracy of a translation.

At this point Brunn warns readers that the next several chapters will contain many examples which “may seem slightly technical.” He encourages those who aren’t “linguistically inclined” not to get bogged down in the technical examples (84). I’m not sure why he places this statement here in the middle of the book, since the whole book is full of technical examples. But his encouragement is valid given the level of detail he includes.

Moving forward, he deals with questions relating to the doctrine of inspiration. Those advocating more literal approaches to translation seem to want to raise the philosophy of translation to the level of doctrine, and accuse those holding a more functional equivalent approach of holding a lower view of scripture. He shows that affirming verbal plenary inspiration doesn’t require a word for word approach, and gives numerous examples that demonstrate that even those espousing a literal approach don’t follow their own philosophy consistently.

For me, one of the most interesting and helpful chapters is chapter 7, The Babel Factor. Here he offers lessons from Bible translation in other languages than English. He shows that the English language debate makes no sense when dealing with non-Indo-European languages, which comprise 94% of the world’s languages. Using multiple examples from Lamogai, the language of a people in Papua New Guinea with whom he worked for many years, he shows how specific words and concepts, as well as grammatical and syntactical constructions make literal translation virtually impossible. Following from this presentation he shows how even the New Testament authors were flexible in how they translated from the Old Testament.

In the final chapter, Brunn returns to his appeal for unity in this issue. He has demonstrated that translations have more in common than they have differences. Here Brunn summarizes the argument of the book and shows that unity is indeed possible. He lists 26 practices that all translations share (189, 190). His main point throughout is that, regardless of the translation theory espoused by the translator, translations are always inconsistent in the degree to which they adhere to the theory. The question is not whether translators following different theories make adjustments to their theories when they translate; the issue is merely the frequency with which they do so. This being the case, we should extend grace to those whose theories differ from ours. Rather than arguing about which version is more accurate, we should take advantage of the differing perspectives offered by different kinds of translations in order to gain the most multi-faceted understanding possible.

Those of us who read multiple languages understand this intuitively. It’s not a question of whether my German or Romanian translation(s) is more accurate than my English one(s). I gain different insights into who God is and what he wants from and offers to his people, and I experience him in different ways, when I see him through different linguistic lenses. According to Brunn, the same thing should be true as we read, reflect on, and obey different English versions.

I found the book interesting and helpful. People who are not conversant with the details (and the flames!) of the debate can still profit by Brunn’s research. Careful and thorough, the book’s unique contribution lies in the detail with which Brunn builds his case. He moves from dozens of concrete examples of real translations to translation theory rather than the other way around. That level of detail can be almost overwhelming at times (I calculate 60-some pages of comparison charts). I didn’t study all the charts and figures carefully, but the raw data is in the hands of those who want to go deeper. I also found it helpful to put the translation issues into perspective by comparing English translations with other, non-Indo-European languages.

My final comment concerns the whole discussion. From a global perspective, this debate seems trivial and somewhat senseless. It’s a specifically English problem, and it reflects an ethnocentric perspective that I find disturbing. We argue about the respective merits or defects of a multitude of English translations (YouVersion currently lists 50 English versions, which is far from exhaustive), while more than 1800 languages (representing 57% of known languages) exist into which not a single book of the Bible has been translated. We enjoy an overwhelming abundance of translations while millions of people hunger for God’s word in a language that they can understand.