One with Christ: An Evangelical Theology of Salvation. 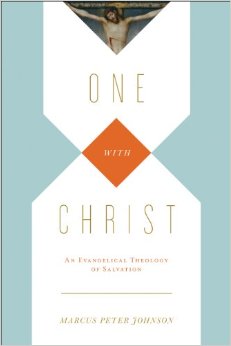 What does it mean to be “saved?” When Evangelicals talk about salvation, what are they actually talking about? Marcus Peter Johnson in One with Christ would argue that the majority of Evangelicals, when they talk about, teach, preach, or write on salvation, tend to separate it from the Savior. What Johnson means is that Evangelicals tend to divide the work of Christ, accomplished for our salvation, from the person of Christ, with whom we are profoundly united in salvation. This concept of believers’ union with Christ, and how important it is for salvation, is what Johnson sets out to teach and clarify.

Union with Christ is a sorely neglected subject in Evangelicalism, yet it is found often in Scripture, particularly in Pauline and Johannine writings. Why is that? Whether it is in the church or the academy, there is often a reluctance to teach or even engage that which cannot be neatly explained. Union with Christ is an abstract concept, even mysterious, and is quite difficult to expound without careful study, thus it is often deserted in exchange for more transactional concepts of salvation (i.e. legal, forensic language) that are easier to understand. Additionally, in Western Evangelicalism we (this author is guilty of this at times) are currently addicted to efficiency and convenience. We prefer presentations of salvation that are easy to swallow, clean-cut, and require no further thought once conversion occurs (which, in a word, is unbiblical). This also lends to the preference for transactional language for salvation. Union with Christ, and indeed the true Gospel, is conceptually difficult, messy, and requires life-long contemplation and increasing self-awareness as Christ through the Holy Spirit sanctifies His followers. Furthermore, Americans, especially, are rampantly individualistic and union with Christ challenges that individualism as it calls believers to be one with Christ and one with each other, calling us to die to ourselves that Christ may flourish within us. These are a few reasons why union with Christ as a subject has been ignored and why One with Christ is a necessary book.

Johnson clearly sees this abandon of union with Christ in Evangelicalism and has sought to rebuke and repair that neglect. He, too, was guilty of this neglect. But as he studied many of the Reformers, particularly Calvin, he became convicted by how much union with Christ permeated their work and theology, and therefore made the study of union with Christ his life’s work. This book represents years of careful scholarship (Johnson wrote his doctoral dissertation on union with Christ) and a distillation of ideas that is well crafted, clear, and attainable for anyone who is willing to exercise their mind. Johnson has written to a great need in Evangelicalism and, as a result, the book has a pleading quality to it that is persuasive. This subject is not simply some “hobby horse” for Johnson; rather, the book made evident that there is a call upon Johnson’s life to write and teach on this subject, which again made the book rather compelling.

As an overview, the book began with an introduction meant to justify the work of the book and give a summary of the following chapters. The first chapter explicates the concept of union with Christ from various angles, as well as explaining its significance. The second chapter seeks to explain first, humans’ connection to Adam in sin (how and why Adam’s sin is passed to all humans) and second, humans’ connection to Christ in the incarnation and how and why, therefore, one’s union with Christ blots out that sin. Chapters three through six discuss various stages of salvation as related to one’s union with Christ, namely justification, sanctification, adoption, preservation, and glorification. By salvation, Johnson is not referring simply to justification, which is another incorrect tendency in Evangelicalism (again, preferring to dilute salvation to a legal, transactional event, as oppose to a lifelong, multifaceted process, which includes the event of justification). Johnson worked to incorporate all stages of salvation, from a Reformed perspective, in this comprehensive book, including abbreviated discussions concerning election and regeneration contained within pertinent chapters. Another term that deserves some attention is Johnson’s use of “preservation.” When Evangelicals see this term in regard to soteriology, it often makes them cringe with thoughts of a “once saved, always saved” view of salvation, meaning that once a person seemingly places their faith in Jesus, they will be saved from condemnation regardless of the life they lead following their “conversion.” However, for Johnson, “the doctrine of preservation in Christ insists that the one who is united to Christ (is saved) inevitably experiences the manifold benefits of that union (is being saved).” He went on to say that this is not a passive process but one in which believers actively participate.

The critiques for this book are few. It was clear, concise, and well-documented Scripturally. One critique was that it was perhaps too thorough; Johnson’s arguments became a bit redundant, though at times they did require repeating. As a result, some of the chapters probably could have been a bit shorter as the same argument applied to the various stages of salvation, just from a slightly nuanced perspective. Instead, Johnson tended to give longer discourses reiterating the same argument he had been making the entire time. Another critique was the lack of a conclusion. Johnson discussed the Lord’s Supper and how it relates to one’s union with Christ, and then the book simply ends rather abruptly. A short, concluding treatise about the importance of understanding and teaching the concept of union with Christ would have been all it took to bookend his argument and seem more intentional about his structure.

One with Christ did not require a replacement of old ideas about Christology or soteriology with new ones. Rather, after reading each chapter, my soteriology and Christology felt fuller and deeper, like a puzzle that got several more pieces filled in. Johnson helped make clear a concept that was very difficult for me to grasp previously and even made it practically applicable at times. I will recommend this book to all of my peers to help deepen their relationship with Christ and enrich their theology.