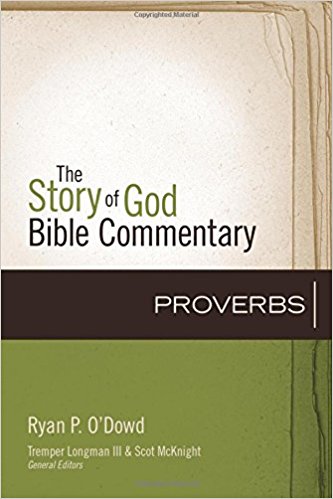 The idea behind the Story of God commentary series is excellent. Not unlike the format of the NIV Application Commentary, also from Zondervan, remarks on each passage are divided into three sections, this time entitled “Listen to the Story,” “Explain the Story,” and “Live the Story.” While the latter two sections correspond roughly to original meaning and contemporary significance, the first contains earlier biblical and extra-biblical background material. But the goal of this still comparatively new series is to exploit the fact that every biblical book is part of God’s grand narrative of Scripture, so that we need to situate both the original and the current settings in their particular places in that story. For narrative material in Scripture this is the most straightforward. For epistolary material, one can still reflect on the stories that led to the composition of the specific letters. But what does one do for a book like Proverbs?

Ryan O’Dowd, an Old Testament scholar with a Ph.D. from the University of Liverpool, who is both a pastor in residence in Ithaca, NY, and a senior (teaching) fellow at the Chesterton House on the campus of Cornell University, tackles this daunting project. The sections on listening to the story, especially once one gets past the first nine chapters of Proverbs, tend to be as short as for any volume in the series thus far. Explaining the story has to be selective, given the scope of each volume, so not every proverb receives comment. By far the best part of the volume are the sections on living the story, as O’Dowd shows that he has not just mastered the major exegetical literature on Proverbs, but is conversant with a wide range of Patristic commentary, classical literature, popular culture, social commentary, and more. Topics in these sections range from the nature of wisdom, taming human desire, metaphors for memory, prosperity and despair, marriage, sex, pedagogy, business and economics, not trusting all one’s intuitions, animal rights, public opinion and shame, the healing power of words, corporal discipline, wine as a mocker, vocation, and much more.

O’Dowd regularly observes links between Wisdom and creation, law and/or prophecy. He draws explicit connections with New Testament themes, not only of how the OT is fulfilled in the NT, but with specific books like James or characters like Judas. He highlights the holistic outlooks on life that the authors and editors of Proverbs display, unlike the compartmentalization of so much university learning today, not to mention modern life in general. He observes that proverbs tend to have more of a contemplative than a legislative function. Wisdom in Proverbs is much more than the learning of a set of rules but is the shaping of one’s character and desires. The contrast between Lady Wisdom and Dame Folly in chapters 1-9 is fleshed out in the rest of the book with its teaching on a good wife and the adulterous woman. Overall, wisdom is paradigmatic for God’s redemption first of Israel and then of the whole world so that “Christians should confidently read Proverbs expecting to see designs for reconciling and renewing a fallen world” (p. 100). And “the overwhelming thrust of this imagery” is “to see life as a journey” (p. 115).

A particularly interesting segment of the Live the Story section on 6:20-7:27 summarizes Carol Meyers 2014 JBL article that argues that we have often exaggerated how patriarchal ancient Israelite society was. Certainly by the time we get to chapter 31, we find elements that defy typical modern complementarian stereotypes. Lemuel’s mother’s advice in verses 1-9 is the only known instance of a queen mother giving advice to a king, and it is inspired and inscripturated! The noble wife in the rest of the chapter offers “a timeless critique to the fleeting and ever-shifting measures of good looks,” modeling instead “her religious faith . . . most evident in her virtuous and active life among her community and her family” (p. 424). Her work is hardly limited to the domestic realm. With respect to the famous triad of money, sex and power, “Wisdom does not say ‘no’ to sex, wealth, power, and food, but ‘yes’ to sex within marriage, feasting balanced by fasting, wealth used justly and power directed to the common good” (p. 338). Indeed, balance is a key theme in numerous areas in the Proverbs.

O’Dowd recognizes that attempts to provide detailed outlines for Proverbs 10-29 invariably fail. But he is conversant with Knut Heim’s two books on Proverbs, focusing on its structure and style, and is open to seeing micro-units of thought that go beyond individual verses or couplets scattered about the book. His most common scholarly conversation partner, however, and appropriately so, is Bruce Waltke, given his magisterial two-volume NICOT volume on Proverbs.

O’Dowd is more suspicious than many are of Proverbs’ supposed borrowing of the wisdom of Amenemope, even when it takes it in a different direction. He is more inclined to see the concepts as widely known and discussed, without any direct dependence on an Egyptian source. On the other hand, he recognizes with almost all commentators that one cannot treat Proverbs as timeless, exceptionless truths but must realize they are generalizations that are often true, both descriptively as well as prescriptively. We must also recognize the righteous person throughout the Proverbs not as someone who exhibits sinless perfection but who avoids the crassest forms of misconduct.

The book contains a few embarrassing mistakes, like “loaf bread” for “loaf of bread” (p. 141), “tenant” for “tenet” (p. 218), “principals” for “principles” (p. 222), “reflects” for “reflect” (p. 277) and “than” for “that” (p. 291), as well as less readily noticeable typos, such as uncapitalized German nouns and misspelled authors’ names. But these are few and far between. Overall, the work is a reliable and helpful guide to making sense of the Proverbs and applying them in our world today. The commentary actually does little to fit Proverbs into the “story of God” concept that one can’t find in other commentaries, but then that probably reflects the limitations of that concept for a work of Proverbs’ genre, not any failing in the commentary’s overall quality. O’Dowd certainly keeps the reader focused on main themes, key details and overall contextualization in ways that make this volume a welcome addition to the commentary literature on Proverbs.