Questions and Rhetoric in the Greek New Testament 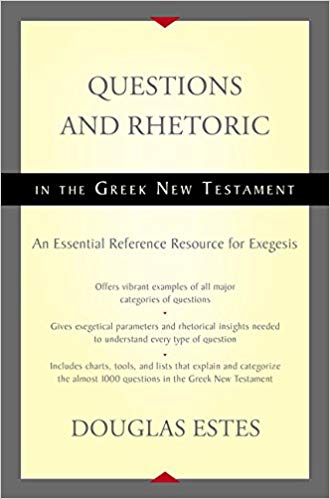 Estes helpfully and thoroughly reminds us who were brought up in an interpretive tradition that values propositional truth above all else, that the thought-world of the New Testament writers held a special place for questions. The approximately 1,000 questions in the NT (roughly 15% of its sentences) are essential to its message (p. 18). Without them, the Gospels lose a key element of their authentically human voice, and the Epistles lose both parenetic and admonitory force. Thus, one who wishes to understand the full-orbed NT message must consider its esoteric (question-related) along with its alethic (truth/proposition-related) logic (pp. 18-19). A well placed question can focus a scene or argument, where paragraphs of statements would be less effective tools of communication. “The simple fact is that the ancients were as concerned about what they wanted to ask their readers as they were about what they wanted to say to their readers” (p. 334).

The book is written as a reference work, with definitions and discussions of question formation and type laid out in similar format and wording. It is well organized and accessible to anyone who has a good grasp of Koiné Greek grammar and a rudimentary understanding of logic (p. 31). And there is room to disagree about points of grammar, but still find in Estes’s work an important contribution to the field of New Testament studies. A couple of examples will suffice: 1) pages 43 and 44 refer to verbal mood in general in terms of potentiality and the subjunctive mood in particular in terms of uncertainty, where one might prefer the terms attitude (“the language user’s perspective on the relation of the verbal action to reality,” S. E. Porter, Idioms of the Greek New Testament [Sheffield: JSOT, 1992], p. 50) and projection (which does not presuppose doubt, D. L. Mathewson and E. Ballantine Emig, Intermediate Greek Grammar [Grand Rapids: Baker, 2016], p. 165) respectively; 2) pages 107 and 108 suggest that the interrogative τÎ¯ (ti) in Matt. 14:31 could be rendered “Why?” What?” or “Whom?” when, because it is neuter, it cannot mean whom (τÎ¯να/tina). Estes makes some comments about how Koiné Greek writers and readers thought that cannot finally be confirmed or denied by anyone separated from them by millennia, yet his underlying point that they thought and used language differently than we do needs to be emphasized. Indeed, that τÎ¯ could mean both ‘why’ and ‘what,’ or that á½…τι (hoti) could mean both ‘that’ and ‘because’ should cause interpreters of the Greek NT (GNT) to pursue their task with great care.

After the Introduction, which makes a case for the importance of analyzing and studying the questions in the GNT and provides the definition, “A question is any utterance with interrogative force that asks not says, that always applies some rhetorical effect, and that invites a reply of some sort” (p. 20), Estes turns to question formation (Ch. 2). Here it is worth mentioning that our earliest NT manuscripts have no spaces between words, much less punctuation marks. That is, questions must be discerned and delimited in context. Even so, Estes opines that “we can distinguish questions from propositions in the GNT with a high degree of certainty, based first on grammar and second on linguistic features” (p. 42). Word order plays a part, as does verbal mood, and certain words, including some negatives and “Π-words,” e.g., πá¿¶ς (pÅs), πÏŒτε (pote), πÏŒθεν (pothen) and even τÎ¯ς, τÎ¯ (tis, ti), are naturally interrogative. He discusses the semantics of questions, force, bias, informational and rhetorical quality, followed by pragmatics, and finally answers. (His focus is on questions, but he does take time to explain the kinds of answers different types of questions expect and to caution the interpreter not to “define questions in light of their answers” [p. 89].)

Chapter 3, which is devoted to syntax-driven questions, begins with the four basic question formations Estes identifies: polar (yes/no), variable (identified by such words as, where, why, and when), alternative (disjunctive) and set (provide specific options from which one can choose) (p. 93). He explains in turn and in detail how each type can be structured, with Greek and English examples along the way, and what range of rhetorical effect each might have. He also offers a GNT case study at the end of all of his discussions of question type. To the four above, he adds a fifth, composite questions, “a catchall grouping that represents any question shaped by syntactically modifying one of the four standard formations” (p. 122). His treatment of composite questions includes conjunctive (requiring a copula), disjunctive (requiring a disjunctive word like á¼¤ (Ä“), or), conditional (the protasis/conditional clause must be fulfilled for the question to be “valid” [p. 135]), and sluices (formed with significant ellipsis). The chapter is a fine argument for the labeling and serious consideration of question type as part of the exegetical process. Does it not matter, for example, whether Jesus gives the disciples multiple options or simply asks them a “yes or no” question?

It certainly matters whether a question is open-ended or not, so Estes examines semantically driven questions in Chapter 4. Towards distinguishing such questions, which will also be driven by syntax and pragmatics, he queries, “Is the question more meaningful than the sum of its parts?” (p. 147). If it is, it is worth exegetical note that “something more is being asked by this question than first meets the eye” (p. 147). Emotive word choice (“Do I have a God-given right?”), negatives (“Do I not have the God-given right?”), lofty subject matter (“How lovely is God’s dwelling place?”) etc., can influence the one who must respond to a question. Estes covers 23 semantic categories (open, speculative, lyric, deliberative [which he defines as having to be 1st person singular], aporetic, sequence, proof, means, indexical, endoxical, phatic, test, inapposite, riddle, dilemma, counterfactual, decision, confirmation, request, negative polar, biased, loaded and leading) using the same approach (detailed explanation of question type, Greek and English examples, consideration of rhetorical effect, and case study) as he did in Chapter 3. Particularly ponder-worthy is his interpretation of Jesus’ phatic question to his mother in John 2:4 (τá½· á¼μοá½¶ καá½¶ σοá½·, γá½»ναι; (ti emoi kai soi, gynai?) “What do you want with me, woman?”). Instead of wondering why Jesus was so abrupt, or even rude, he states that “Jesus uses informal slang to ask his mother a question, which in narrative dialogue indicates a close relationship between two characters” (p. 201).

Chapter 5, “Questions Driven by Pragmatics,” highlights where questions occur in a discourse. Whether a question is posed by the first (or second, or third …) speaker in a narrative has rhetorical impact, as does where a question is placed in a paragraph. Estes, therefore, looks at “turn” (1st turn governing and expository questions; and 2nd turn opposing-turn, focus-shifting, echo and repair questions) and position, as well as strings of questions, in his established pattern and depth. Of his example from Matt. 26:10 (τá½· κá½¹πους παρá½³χετε τá¿‡ γυναικá½·; (ti kopoys parechete tÄ“ gynaiki?) “Why bother the woman?”), Estes says, “Jesus’ question highlights the fact that the disciples may think they are arguing about perfume, but really they are arguing about the actions of a person (in a personally hurtful way to the woman)” (p. 299). Jesus has refocused the disciples, moreover established himself as the one who gets the last word in the narrative.

The final chapter, “The Function of Questions in the Greek New Testament,” is only two pages long. Estes briefly outlines the dramatic, rhetorical, and dialectical functions of the questions we find in the GNT. He states emphatically that “the potency of questions to persuade an audience is unmatched” (p. 333). Whether a question actually expects a verbal response, or intends for the one asked to do some private, quiet soul-searching, it is a powerful linguistic tool. When we skip over NT questions to get to the “meat” of propositions, might we be missing the marrow of a discourse?