Religion for Atheists: A Nonbelievers Guide to the Uses of Religion 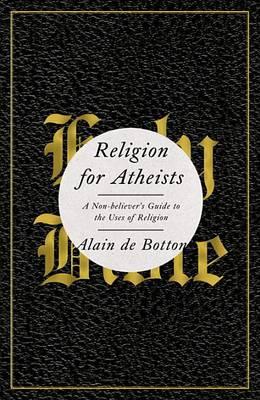 Cultural critic and popular atheistic philosopher, Alain de Botton, has a new angle on religion. Instead of denouncing religion as having no objective value (the modus operandi of “the new atheists”), de Botton scavenges for atheist blessings among the institutions, practices, and history of the (philosophically benighted) believers. No, there is no God. That, he thinks, is settled—although he gives no arguments to that effect. But why be so hostile to man’s religiosity—his sense of wonder, mystery, fellow-feeling, and the sacred? After all, a lot of religious things are pretty interesting and even inspiring (although there is no Spirit behind any of it). And even though the cognoscenti have outgrown any religious metaphysics (“God is dead,” as Nietzsche pontificated), there may be cultural and psychological gems mixed into the metaphysical manure of empty concepts such as God, angels, providence, prayer, prophets, miracles, saints, salvation, and final judgment.

This ambitious (or quixotic) endeavor has exposed de Botton some savage criticism from fellow God-bashers. Although he didn’t live long enough to excoriate Religion for Atheists, it is certain that Christopher Hitchens, the author of the vitriolic God is not Great: How Religion Poisons Everything, would have denounced it as sentimental, unreasonable, and finally absurd. The entire new atheist movement distinguishes itself precisely by not tolerating religion (and particularly Christianity, which is routinely treated with enormous scorn) and for wanting to exorcise all things religious from culture. Instead of saying that religion is false, but we have to put up with superstition in a free society, the New Atheists claim that religion is the source of all manner of evil. It must be expunged from any rational society. No pats on the head for religion; rather, bring the hammer.

But de Botton who has several popular books under his belt, including Proust Can Change Your Life, attempts to articulate a kinder, gentler atheism. He even proposes a religious atheism. This is not new. The founder of sociology, August Comte (1798–1857), proposed an atheist “religion of humanity” in the nineteenth century, and de Botton draws some secular inspiration from his fatuous and failed endeavor. Moreover, The Secular Humanist Manifesto I, (1933), spoke of secular humanism as a religious endeavor—sans God, however. In The Secular Humanist Manifesto, II (1973), any positive reference to religion was fumigated. In the famous Torcaso vs. Watkins Supreme Court decision of 1963, “Secular Humanism,” was declared to be a “religion.” Sadly, this ruling was never applied to mandatory state education, which is dominated by this secular humanism in every subject and which will not even allow scientific evidence to be brought against aspects of Darwinism. (On this, see Francis Schaeffer, A Christian Manifesto [Crossway, 1981].)

There is no need to describe much of de Bottons project (as witty as some of it may be; he is British, after all), since it rests on an abject absurdity—or more than one, as we will see. On this, I side with the new atheists (“take no prisoners”), and with their grand and eloquent precursor, Friedrich Nietzsche (1844-1900). Consider this soliloquy from “The Madman” parable in The Gay Science (“gay” is taken in the older sense).

The madman jumped into their midst and pierced them with his eyes. “Whither is God?” he cried; “I will tell you. We have killed him—you and I. All of us are his murderers. But how did we do this? How could we drink up the sea? Who gave us the sponge to wipe away the entire horizon? What were we doing when we unchained this earth from its sun? Whither is it moving now? Whither are we moving? Away from all suns? Are we not plunging continually? Backward, sideward, forward, in all directions? Is there still any up or down? Are we not straying, as through an infinite nothing? Do we not feel the breath of empty space? Has it not become colder? Is not night continually closing in on us? Do we not need to light lanterns in the morning? Do we hear nothing as yet of the noise of the gravediggers who are burying God? Do we smell nothing as yet of the divine decomposition? Gods, too, decompose. God is dead. God remains dead. And we have killed him.

“How shall we comfort ourselves, the murderers of all murderers? What was holiest and mightiest of all that the world has yet owned has bled to death under our knives: who will wipe this blood off us? What water is there for us to clean ourselves? What festivals of atonement, what sacred games shall we have to invent? Is not the greatness of this deed too great for us? Must we ourselves not become gods simply to appear worthy of it? There has never been a greater deed; and whoever is born after us—for the sake of this deed he will belong to a higher history than all history hitherto.”

Atheism, or philosophical materialism, bequeaths to us a “world without windows” (Peter Berger), a closed system of cause and effect (Francis Schaeffer), which is all reducible to brute natural laws, matter and energy, chance, and a heck of a lot of (meaningless) time. Death is the end of the individual and of the entire cosmos eventually. That is the implacable narrative of naturalism, like it or not.

We cannot “comfort ourselves” by appropriating from religion what only religion can provide: divine revelation, a supernatural kingdom and worldview, providential history, real redemption from a source outside ourselves, and the life everlasting, either in the New Creation or in hell.

One may put the argument against de Bottons’s daft idea formally:

Or it can be put thus:

Or, to put it yet another way for hardheaded atheists who wants to steal from religion what atheism itself can never provide:

(This argument restates the first one given, but with a different form.)

I need not go on with this logical theme, lest I suffer the charge of pedantry. But another absurdity needs a tongue-lashing. While de Botton’s illicit existential booty largely comes from Christianity, he samples and mixes in bits from other religions as well. Thus, Buddhism can teach us about tranquility through meditation, and so on. But the problem mentioned above, with respect to Christianity, arises here as well. One cannot find Buddhist meaning without Buddhist truth. If “The Four Noble Truths” are not true, why meditate? But that is not all. Buddhism and Christianity affirm different and antithetical worldviews at their very core. They both cannot be true, since they disagree on minor things like the existence of the soul, the afterlife, and the ultimate reality (God or Nirvana). So, the absurdities multiply for de Botton who obliviously marches from chapter to chapter cherry- picking likeable aspects of false religions—whose meaning depends on their mutually-exclusive truths. Oh, my! How bad can it get? One must invoke the Apostle here:

For although they knew God, they neither glorified him as God nor gave thanks to him, but their thinking became futile and their foolish hearts were darkened. Although they claimed to be wise, they became fools (Romans 1:21-22).

In looting from the biblical ideal of fellowship, de Bottom imagines an “Agape Restaurant, a secular descendent of the Eucharist and of the tradition of Christian communal dining” (45). But later in the chapter, he invokes the debauched tradition of “the feast of fools,” in which normal social relations are skewed to let off the steam built up through good behavior. This means a lot of debauchery.  Of course, there is nothing like a “feast of fools” in the Bible, but no matter. For de Botton the “feast of fools” turns into a sexual orgy, which is pornographically depicted on page 67. Stunned, I ripped it out and disposed of it immediately after briefly seeing it. So, in the irresponsibly eclectic and illogical mind of Alain de Botton one can equally draw from the practice of Holy Communion and from the unholy pagan bacchanalia, the likes of which the Apostle Paul explicitly condemns.

But mixing communion with “acts of the flesh” for his atheist religion is quite convenient for de Botton and entirely unjustified by any consistent set of godless principles.

Not only is de Botton’s program for religious atheism absurd on several levels, it also testifies to the paucity of atheism qua atheism to deliver any objective or lasting human meaning based on transcendent truths. As astronomer Carl Sagan asserted without argument in Cosmos in 1980: “The universe is all that is, was, or ever will be.” As such atheism fails a necessary test for the truthfulness of a worldview. This is how I articulated it in Christian Apologetics (InterVarsity, 2011) when discussing the rational tests for a worldview.

Criterion 5a: For a worldview to be a likely candidate for truth, its essential propositions must be existentially viable.

Criterion 5b: If a worldview leads habitually to philosophical hypocrisy, it is rationally disqualified, since this indicates that it does not correspond to reality.

Atheism is not existentially viable (or livable), since we are meaning-seeking beings supposedly lost in a meaningless world. As Francis Schaeffer said in The God Who is There, this would be like a fish developing lungs in a world without an oxygen atmosphere. It is beyond pointless. This reality leads atheists such as de Botton to commit philosophical hypocrisy by vainly trying to purloin ideas from antithetical religious worldviews to give some meaning to an ultimately meaningless world. It melts down to these two logically incompatible propositions:

But obviously, if (1) is true, then (2) must be false. One must engage in vicious mystification to try to think otherwise. A logically consistent set of two propositions for the atheist is as follows:

Bertrand Russell (1872-1970), perhaps the leading philosophical atheist of the twentieth century, put it unforgettably in his often anthologized essay, “A Free Man’s Worship.”

That man is the product of causes which had no prevision of the end they were achieving; that his origin, his growth, his hopes and fears, his loves and his beliefs, are but the outcome of accidental collocations of atoms; that no fire, no heroism, no intensity of thought and feeling, can preserve an individual life beyond the grave; that all the labours of the ages, all the devotion, all the inspiration, all the noonday brightness of human genius, are destined to extinction in the vast death of the solar system, and that the whole temple of Man’s achievement must inevitably be buried beneath the debris of a universe in ruins—all these things, if not quite beyond dispute, are yet so nearly certain, that no philosophy which rejects them can hope to stand. Only within the scaffolding of these truths, only on the firm foundation of unyielding despair, can the soul’s habitation henceforth be safely built.

Russell, who drank the cup of atheism to the dregs, realized his godless fate. The “worship” of which he speaks later in the essay is simply the refusal to engage in the worship of power. It has nothing to do with de Bottom’s hopeless program of ontologically empty activities.

However, the Christian can offer a “religion for atheists” — Christianity itself. But that, of course, requires the abandonment of atheism, the embrace of theism and the Incarnation, and the end of pretending otherwise. Only then, will religious meaning become a reality for the thirsty soul. As Jesus put it at the beginning of his world-changing ministry, “Repent for the Kingdom of God is at hand” (Matthew 4:17).