Saving Leonardo: A Call to Resist the Secular Assault on Mind, Morals, and Meaning 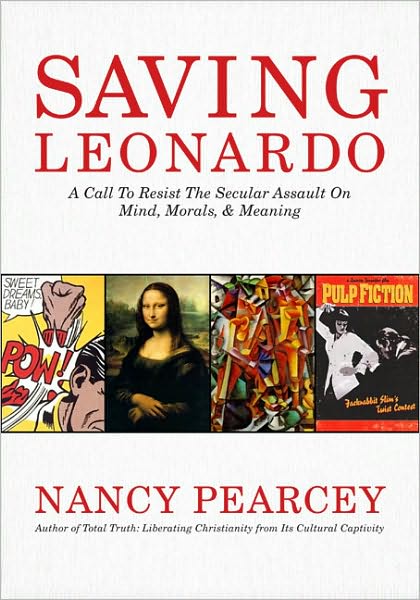 Nancy Pearcey has established a reputation as one of the leading female Christian apologists today. Currently Professor of Apologetics at Houston Baptist University, Pearcey is well-respected for her analysis and critique of culture, by exploring the underlying worldviews at work. In 2004, her tremendously successful book, Total Truth: Liberating Christianity from its Cultural Captivity was published. In it, Pearcey’s emphasis on the Lordship of Christ over all of life—heart and mind alike—made the book a valuable antidote to the false yet ever-so-popular dichotomy between faith and reason. At the expense of much ink and paper for note-taking, I read Total Truth when I was a sophomore in college, and thus was better able to stay afloat in the often tumultuous sea of competing worldviews.

Saving Leonardo continues the work begun in Total Truth. Pearcey’s task is large: to evaluate contemporary Western culture by looking at each of its dominant philosophies, exposing flaws in the view, and showing how it affects science, visual art, music, and literature. False ideas are common, and they powerfully shape culture. This is because the cultural and academic elite, who tend not to be Christians, act as the gatekeepers of knowledge (9). Unfortunately, contemporary Christianity has failed to adequately engage culture and academia at the level of the gatekeepers. Furthermore, few Christians even know how to spot erroneous philosophies at the foundation of what public schools advocate, what some artists produce, what the media reports, what Hollywood proclaims, and what many books contain. Oblivious, we passively absorb such false ideas, which impede our ability to flourish the way God intended, and ultimately undermine the gospel. The best way to think critically and redemptively about culture is to learn how to spot and correct errors which surface in a variety of contexts. In this way, Saving Leonardo serves as a good tutorial.

Moreover, keeping in harmony with Total Truth, Pearcey emphasizes Christ’s Lordship over all of life. Because all truth is God’s truth, the Christian worldview affirms all that is good, true, and beautiful about these false worldviews. It then gives these elements meaning by explaining creation, fall, and redemption like no other worldview can (26). When we understand from where people get their worldviews, how various philosophies prompt cultural changes, and where these philosophies go wrong, we are better prepared to love and address the existential and intellectual needs of each soul we meet. When individuals recognize their worldview’s failure to meet their deep needs, they become most receptive to the gospel. This is the heart of culturally-sensitive apologetics, as her predecessor Francis Schaeffer modeled.

The influence of Schaeffer is evident in this book. Like Schaeffer, Pearcey is concerned with dismantling the fact/value, or faith/reason distinction. Western society is dominated by methodological naturalism and the resulting epistemology of scientism—which Pearcey idiosyncratically replaces with the term “empiricism.”  Because scientism (“empiricism” in the book) holds that science alone holds the keys to knowledge, things like the findings of biology, physics, and chemistry belong exclusively to the realm of fact. By contrast things like art, morality, and religion are in the completely separate realm of value. Faith (or values) has been locked away into what Schaeffer termed “the upper story,” and reason (or facts) resides in the much more respectable “lower story.” The logical consequence of this is that things of faith cannot inform anything in the category of reason, and reason cannot lead one to or help one understand faith. Faith becomes, then, a merely therapeutic crutch. By this secular definition, faith cannot be rational. Pearcey rightly warns that this dichotomy ultimately reduces religion to “a mysticism with nobody there” (187). Following Schaeffer, Pearcey seeks to expose the secular assumptions and philosophical errors of this division. Then, once the erroneous belief structure is dismantled, the Christian worldview is offered in its place. Within Christianity, fact and value, faith and reason harmoniously coexist as equally important pieces of the puzzle.

Saving Leonardo’s very appearance is commendable. Its heft and high-quality binding lends an air of importance to the book, which is fitting for a project of such scope and import. The paper is high-quality and glossy, which beautifully supports the many, colorful images of the art being discussed. As is fitting for a book with a large focus on art, it is visually captivating. Thus, the book often feels like a text on art history, leading the reader to a greater appreciation of the art discussed. Of course, it goes far beyond what a typical art history book would cover, by tracing the theological and philosophical movements throughout history which have informed and inspired the creative world. These paintings, books, and musical trends are thus situated within a richer, more informative worldview context so that the reader understands what philosophical or theological assumptions are on display in the art.

However, the book is not without its problems. The scope is enormous, which also is one of its greatest weaknesses. It often seems unfocused, due to trying to cover the entire history of Western philosophy, art, music, theology, politics, and other cultural trends. This threatens to overwhelm the reader since he must process so many topics at once, and from various angles. Because Pearcey has had to move very quickly and accomplish so much in 336 pages, it is sometimes hard to distinguish what she is prescribing, what views she intends to disavow, and what she is simply describing.

More specifically, there are some philosophical difficulties in the book. One of the larger problems involves a perennially popular whipping boy: the philosopher, René Descartes (1596-1650). I mention him because he surfaces several times in the book. Pearcey, like so many before her, have interpreted Descartes’ famous line, “I think, therefore I am” (Cogito ergo sum) as an expression of human autonomy from God (51-52, 234). However, this was not Descartes’ goal, neither was it implied by his principles. Rather, Descartes’ initial concern was epistemological, not metaphysical. The ultimate, ontological source of knowledge is a metaphysical question, while the foundation of what we know is an epistemological one. He acknowledged God as the source of reality (and even used an argument for the existence of God to prove this), but he also realized that many otherwise rational skeptics denied the truth of God. So, he attempted to find epistemic common ground with the skeptic in order to discover something not even the skeptic could deny, which is the famed Cogito. His goal is to defeat the skeptic at the skeptic’s own game. In saying “I think, therefore I am,” he was not saying “My thinking is of ultimate importance,” or even “My thinking defines me,” and certainly not “I think, therefore I am an autonomous being.” Instead, he was simply claiming that if I think, I must exist as a thinker. I am thinking, therefore I can be absolutely certain that I (the thinker) exist. It is important to understand what Descartes was setting out to do, lest we too hastily dismiss someone who may be actually be helpful to our cause.

There is also some philosophically questionable language used in this book. To continue with the theme of epistemology, Pearcey states on page 24 that each person’s list of credible worldview possibilities will be determined by his or her theory of truth—”what philosophers call your epistemology.” However, epistemology discusses the theory of knowledge, whereas theories of truth lie in the jurisdiction of metaphysics. Later on in the book, Pearcey uses the term “rationalism” in an unusual manner. On page 125, she says rationalists believed that the deeper structure of reality was mathematical. However, this is an oversimplification, and is not the essence of philosophical rationalism. The core of the rationalist/empiricist debate is over whether or not we have innate, a priori knowledge of anything apart from sense experience (the rationalist’s position), or if instead we have only sense experience on which to begin building knowledge (the empiricist’s position). Seen in this light, rationalism does not seem like so great a problem for Christianity after all. This is because humans do possess a priori knowledge, such as a basic understanding of logic, and that the self exists.

There are a few other philosophical problems, but they need not be mentioned here. On the whole, though, Saving Leonardo is to be praised for showing how worldviews strongly influence culture. Unless we follow Pearcey’s advice and educate ourselves to learn how to spot error, we will be swept further away from truth and closer to secularism. Pearcey shrewdly counsels her readers to understand that they need not personally enjoy certain trends in art, literature, or politics, but nevertheless, they do need to pay attention to what these trends have to tell us about the state of the world we live in and what it is crying out for. Only then can we wisely and sensitively offer Truth as a balm for a world galled by error.