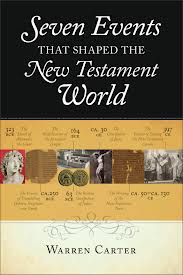 Would you like a quick overview of the intertestamental world and early Christianity unencumbered by an author’s desire to squeeze in every important person, development and date?  Would you like to focus very selectively on perhaps the most important events, exploring each of them in at least enough detail to understand their significance for Jesus, his first followers and the religion they birthed?  If so, then this little book is for you.  Your travel guide is Warren Carter, prolific author, professor of New Testament at Brite Divinity School, who is especially known for contrasting the nonviolent early Jesus movement with the violence-filled empire that surrounded it.

Carter’s seven events are the death of Alexander the Great, the translation of the Hebrew Scriptures into Greek, the rededication of the Jerusalem temple, the Roman occupation of Judea, the crucifixion of Jesus, the writing of the New Testament texts, and the process of the closing of its canon.

By choosing Alexander’s death in 323 B.C., Carter can tell the story both of his life and of the Hellenistic empires that immediately followed him.  Alexander was an amazing military strategist and conqueror, establishing new cities, dispersing his people to old ones, and setting the stage for Hellenistic culture to become widespread.  He was far less exemplary in his personal life and character traits.  Jesus and Paul offer striking contrasts with Alexander as to the nature of true manliness.

In his chapter on the creation of the Septuagint, Carter examines which parts of the Letter of Aristeas, that tells the story of the translation of the Hebrew Scriptures into Greek, can be believed and which parts must be legendary.  The date (ca. 250 B.C.) is a little too early, the historical figures a little garbled and the story of 72 independent translators arriving at identical results obviously legendary.  But Alexandria may be the correct setting, and the purpose was clearly to establish Jewish identity within a Hellenized world, both in commending its religion in a multicultural context and in setting boundaries for that same process.  As the main translation of the Scriptures for the New Testament writers, it regularly enabled them to see texts through a “Jesus-lens” that might have been harder to do from the Hebrew Bible.

The rededication of the temple in 164 B.C. likewise allows Carter to recount the story of the Maccabean revolt and its aftermath—the Hasmonean dynasty.  He highlights five ways in which Jews negotiated the crisis of Antiochus Epiphanes’ desecration of the temple—accommodation, flight, nonviolent protest, violent rebellion and waiting for God to act.  All would become first-century options under Rome as well.  Paul would understand Jesus as fulfilling the Mosaic covenant through his faithfulness, even to death, enabling his followers to emulate that faithfulness.  This requires translating the vexed pistis IÄ“sou as “faith(fullness) of Jesus” rather than the traditional “faith in Jesus”.

The Roman occupation of Judea by Pompey in 63 B.C. becomes the springboard for discussing Roman power and rule, especially under Herod the Great.  Just as Jews continued to diverge in how to live in the context of imperial occupation, so too did Jesus’ followers.  Their teaching, like his, contains contrasting responses, nowhere more clearly exemplified than in Romans 13 and Revelation 13.  The government can be both divinely ordained and demonic.

What would lead a largely nonviolent teacher like Jesus to be crucified, a horrific form of execution reserved for slaves and insurrectionists?  Jesus regularly talked about the kingdom (i.e., empire) of God, and outlined a vision for a just and loving society that Rome could never create.  That alone would be an implicit threat; his more direct challenge to the Jewish leaders in Jerusalem in league with Rome would have upped the ante further.  Were anyone on any large scale ever to take Jesus’ vision seriously, the religious, political, and socioeconomic repercussions would eventually threaten the existing Roman and Jewish orders alike.  Better to nip this movement in the bud!  But, especially using the examples of the Maccabean martyrs at the time of Antiochus, Paul can develop his theology of a sacrifice of atonement for the sins of the world, and the movement will continue even if considerably redirected in its focus.

Carter acknowledges that he is pushing the meaning of “event” to include the writing of all the New Testament documents, which he believes spans A.D. 50-130.  This chapter reads like a miniature New Testament introduction and survey all in itself.  Standard liberal (or even slightly later) dates and theories of authorship are utilized.  The point of all the documents, in all their diversity, is to help Jesus’ followers make sense of their commitment to him and how to live in light of it.

Finally, the process of canonization, culminating in the council of Carthage in 397, is summarized.  Fortunately, this is not the revisionist history (so popular these days) of the winners in early Christian politics rewriting history.  Carter acknowledges the diverse influences beginning already in the second century, discusses the standard criteria of canonicity, the (largely orthodox) books occasionally supported but eventually excluded, and wisely does not make a case for inclusion of the Gnostic texts!

Just as Carter focused on seven events, or clusters of events, he has seven conclusions.  To understand the development of the New Testament, recognize the books did not drop from heaven but originated in a complex historical, political, religious and cultural setting.  They emerged in a multicultural world.  They drew on but reconfigured Jewish tradition.  They engaged and reflected the Roman imperial world.  They spoke with diverse voices.  They were social texts.  And understanding the first readers or audiences proves crucial.

One could have wished that an awareness of the likelihood of earlier dates for some of the biblical books was disclosed.  One could have hoped that diversity was not so consistently presented as if it were contradiction, when it is not.  Connections between Jesus and Paul are in fact much tighter than Carter lets on.  But this remains an excellent primer for a significant amount of formative history for the New Testament, written simply and at times even elegantly, very accessible, and quickly assimilated.  It is an excellent succinct introduction.