Steal Like an Artist: Ten Things Nobody Told You About Being Creative 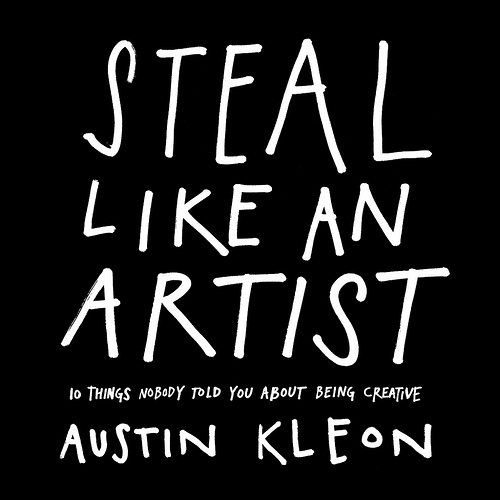 This is a little book (slightly larger than a CD case), containing few words, many garish call-outs, some pedestrian black and white photographs, and too many unattractive scribbles faking as art (I suppose). It sports a clever title, but bears little substance. The word sophomoric comes to mind for most of it. It is written in a rather tacky and loose conversational style. It seems more like a comic book (excuse me, graphic novel) than a real book. A real book features text, and lots of it, unless it is an art book. Yet it was a New York Times Best-seller. This is puzzling and a bit unsettling. One hopes that the mediocre or subpar will be ignored or patted on the head, but not applauded. And yet, we should remember the words of The Preacher:

I returned, and saw under the sun, that the race is not to the swift, nor the battle to the strong, neither yet bread to the wise, nor yet riches to men of understanding, nor yet favour to men of skill; but time and chance happeneth to them all (Ecclesiastes 9:11, KJV).

The author, who looks to be a hipster in his twenties, is said to be a writer and artist who has edited a volume of poetry and has, of course, appeared on a few television programs. Yes, you can reach him on-line. Being distant from most popular culture, I knew nothing of him, spare the book itself. What people take to be his charm is beyond me. I find little reason to be interested in Austin Kleon. His art found on line looks crayon-like and childish. This book was bought as a curiosity (which did, after all, kill the cat) and as part of my endless and endlessly frustrating and fascinating quest to comprehend American culture. In any case, it was a best-seller, and I could read it in about an hour—unlike the vast majority of my books.

Some books are worth reading and re-reading because of their objective worth, however popular or unpopular they may be. For example, I have read C.S. Lewis’s, The Abolition of Man about a dozen times since 1977. Other books should be read even if they are not worth reading in themselves—like Steal Like an Artist. This is because of what they tell us about the times. But popularity does not necessarily mean profundity, and one does not determine truth by counting noses or by logging unique hits on websites. This book’s popularity tells us that people snatch up off-handed, graphically-ugly, but oh-so-trendy books, especially if they have a self-help element. Does not everyone want to be an “artist”?

Kleon’s “ten things about being creative” are mostly mundane, unoriginal, and uncreative. This is ironic, since the subtitle is “10 Things That No One Told You About Being Creative.” In fact, many have told us “these things.” But there are a few insights (mostly quotations from noteworthy authors) sprinkled about in the comic book mire. But the theme of the title (artistic theft) is worth pondering, since art involves imitation. Kleon quotes (but does not reference) Picasso’s statement, “Art is theft.” However, given Kleon’s abbreviated and elliptical style, important distinctions are not made sufficiently. No artist is absolutely original, spare God (but Kleon avoids this). Nevertheless, all artists need to find their own voice, which, for the best artists in any field, goes beyond any synthesis or aping of previous influences. To use an overused word, that is what makes for authenticity in art. Thus, when I hear Peter Brötzmann play tenor saxophone, I hear a bit of Sonny Rollins, John Coltrane, and Eric Dolphy. A more perceptive listener would hear other saxophonic sensibilities. But more than hearing a mere combination of influences, I hear Peter Brotzmann himself. Sadly, Steal Like an Artist has little say about music (except that the author likes to play guitar on the side) and nothing to say about jazz, one of the most creative art forms. Nevertheless, Kleon’s rudimental point stands, and serves perhaps to tame the pride of those who refuse to recognize and imitate artistic excellence outside of themselves. Authenticity is not egocentricity.

The rest of Kleon’s advice, such as “Write the Book You Want to Read,” is either pedestrian or a bit quirky, such as “I Google everything.” The hierarchy of appearance in Google does not correlate well with the hierarchy of real value, but we have none of that. Steal Like an Artist offers no arresting insights or shrewd observations—at least to my mind. Maybe a younger, less experienced reader would be better served, if not ennobled. But neither does it advocate self-destructive or nihilistic practices, so often found in contemporary artists, such as Lady Gaga. Kleon seems like a rather tame Bohemian (unless he is hiding something), who somehow got a book (or near book) published. It could have been worse.

That this book is a best-seller is an indictment of our cultural superficiality and propensity for over-simplification. For far better advice on the meaning of art and art-making, read Francis Schaeffer Art and the Bible, 2nd ed. (InterVarsity, 2006), Phillip Graham Ryken, Art for God’s Sake (P&R Publishing, 2006), and the secular work Art and Fear by David Bayles and Ted Orland (Image Continuum Press, 2001). Art is part of what makes us human, so we should take it far more seriously than Steal Like an Artist.