The Benedict Option: A Strategy for Christians in a Post-Christian Nation 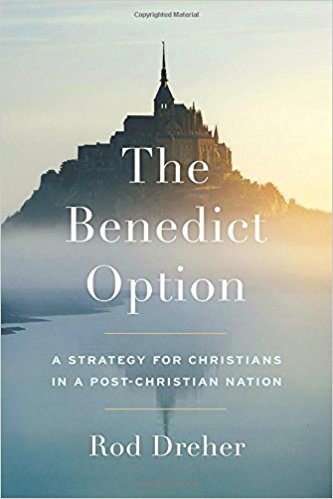 The Benedict Option, written by Rod Dreher and published in March 2017, is a book on how Christians should live in a culture that is no longer Christian. The book gets its name from Saint Benedict of Nursia, a sixth century monk who helped shape the monastic lifestyle. The premise of the book is that Christians in the West have lost the culture war and the only way for Christianity to survive in the West is through the Benedict Option, which a modern version of monasticism.

The book begins by describing the depth of the problem facing Christians in the U.S. and how we got ourselves into such trouble. Dreher explains how culture has turned against Christian ideals and that the vast majority of Christians in the U.S. think and act in ways that are inseparable from the rest of society. He cites the Supreme Court decision regarding same-sex marriage as the final nail in the coffin for Christians in the culture war. Our loss is evidence that Christians need to try a new strategy and focus more on strengthening ourselves and our communities so that we can more effectively influence others. After explaining the problem, Dreher spends the rest of the book explaining the solution. He gives an overview of the Benedict Option and then applies the principles of it to politics, the church, education, vocation, sex, and technology.

Overall, the book is worth reading. It offers a plethora of good suggestions for Christians who are struggling to live the Christian life in a culture that is hostile to Christianity. The book also brings to light many areas of life that could stand to be more strongly influenced by our Christian beliefs such as our choice in vocation and our use of technology. Dreher does an excellent job of diagnosing the depth of the problem facing Christians in America and sounding the alarm as a call to action.

On the downside, it is difficult to distinguish between what is true and what is opinion. Dreher authoritatively gives advice on subjects with little or no evidence to support his views. Even though many of his conclusions are likely correct, it is hard to fully support and commit to them based on the limited evidence provided. The Benedict option is presented as the only remaining choice for Christians who are serious about their faith. It assumes the conclusions are self-evident. Dreher cites very little Scripture and even less scientific evidence to support his recommendations.

For instance, Dreher recommends that Christian children be home-schooled or sent to a classical Christian school prior to attending Christian colleges. He claims that education is the most important factor for living authentically as Christians in the modern world and one of the most important aspects of the Benedict Option. He is probably right regarding the value of education in the lives of our children; however, he makes several unfounded assumptions regarding the best options for doing so. He states, without evidence, that “learning ‘facts’ with a few hours of worldview education (presumably from parents and churches) slapped on top” is not good enough to raise children who will become strong Christian adults.

To support his view, Dreher gives a one-sided argument that only focuses on the negative parts of public schools and the theoretically positive aspects of classical Christian education or home-school. There is no consideration of the benefits of public school or the negative aspects of classical Christian education and home-school. He makes the case that children in public schools will be exposed to things they are not ready to handle, but never mentions that no exposure to issues can be just as harmful as over-exposure. He recognizes that witnessing bad behavior by other children in public school is damaging to children, but fails to consider that the same bad behaviors may also be modelled at Christian schools, which could potentially be more influential in a child’s life since it is coming from other alleged Christians. A responsible parents will consider all factors, including those that might be unique to their area (such as a public school with a lot of Christian teachers and/or bad Christian schools), and as much empirical data as possible. Dreher seems to assume that just because an option is not ideal, or close to it, that other options are automatically better, which is not necessarily true.

Whether one agrees or disagrees with the need for a Benedict Option, and how to implement such a plan, the book provides thought-provoking ideas that can help Christians strengthen their faith. Dreher speaks about the Benedict Option in broad terms, making suggestions that range from mild to extreme, which makes the plan flexible enough for any person to apply it to their life. Unfortunately, it is difficult to understand exactly what Dreher is recommending. He never gives a clear and detailed definition of what exactly the Benedict Option looks like if carried out to the fullest extent, so it is hard to know what is being recommended. Many of the suggestions are just plain good sense for Christians of all times and places, yet Dreher seems to imply these actions are unique to his plan, while other suggestions run the risk of conflicting with each other at the practical level.

If a person were to follow Dreher’s recommendations for educating their children, it would require high tuition costs for classical Christian education or one parent to stay at home. The problem is that Dreher’s recommendations for vocation may also limit a family’s income, preventing them from implementing both suggestions without moving to the country and living off the land. The problem could be overcome through communal Christian living, which Dreher discusses in chapter 6, but his recommendations of living near your church and members of the Christian community are not enough to allow a family to implement the recommendations above, nor is it possible for a family to implement without the same level of commitment from others.

The Benedict Option is a call for Christians to spend more time and energy strengthening their own faith and less time worrying about the rest of society. This basic idea is hard to argue with from a theological or sociological perspective; however, the details of the plan are poorly supported and not always thought out in a practical manner. The book provides an excellent resource for Christians to begin considering ways in which they can better strengthen their faith and live it out in a post-Christian culture, but the solutions should not be wholly accepted without further investigation.