The Life and Witness of Peter 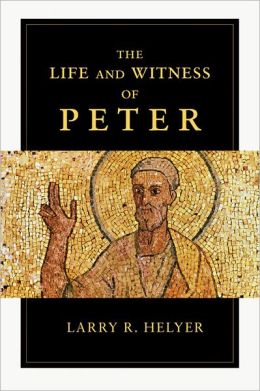 Larry Helyer, professor emeritus of biblical studies at Taylor University, has gained a reputation for offering lucid introductions to expansive subjects. He’s written the standard evangelical introduction to second temple Jewish literature, provided a biblical theology of Jesus, Paul, and John; and now, in The Life and Witness of Peter, he illuminates the great “rock” among the apostles, who too often lives in shadows cast by his lofty peers.

Although not delineated in the table of contents, the book falls into three main sections:  1) a biographical sketch drawn from the Gospels, Acts, and Paul’s letters; 2) introductions and theological explorations of 1 and 2 Peter; 3) an account of early non-canonical traditions about Peter and his legendary legacy in church history. This review will give a selective summary and assessment.

Helyer notes the significance of Peter’s first recorded encounters with Jesus: the miraculous catch moves him from respect to reverence. Jesus’ dubbing Simon as “Peter,” best captured by the English “Rocky,” reveals his character and foreshadows his leadership role in the Jesus movement. Peter speaks for the twelve at his famous confession, which affirms Jesus as the long-awaited Messiah and as the divine Son of God, though at that point, he barely understood either title. Jesus’ response designates Peter as the key rock of the early church, but not as the first pope. His authority to “bind and loose” means “he announces the terms of admittance into the new covenant community and establishes the limits of acceptable behavior within that fellowship” (45). Jesus’ transfiguration validates Peter’s confession and anticipates his own vindication. But for Peter, the road to resurrection would be distressing and fraught with failure. That he is the first apostle to see his risen Lord indicates his forgiveness; and Jesus’ commission to feed his sheep (Jn 21) confirms his restoration. Yes, Pastor Peter would lay down his life for Jesus and his flock, but in a way entirely different than he envisioned in his early zeal (Jn 13:37).

Because 1 Peter is addressed to suffering Christians, “the shadow of the cross shapes its Christological reflections” (128). Heyler unpacks five Christological titles: 1) Jesus is the spotless Lamb of God, who fulfills, transcends and terminates the OT. 2) He is the Suffering Servant and substitutionary sacrifice for sin, who models the middle way between violent resistance and passive submission. 3) Jesus is the foundation Stone that unites the church but trips up detractors destined for disgrace. 4) He is the messianic Shepherd-king, whose rule reflects God’s own leadership and defines the role of Christian pastors. 5) These themes coalesce in Jesus as God’s promised Christ, who provides both the pattern and power for believers to persevere through suffering. How stunning that the disciple most prone to violence and repulsed by Jesus’ cross urges us to follow his example!

2 Peter is a parenetic and polemical letter with “the feel of a last testament” (1:12, 15) and an “apocalyptic substratum” (206-7). Against scholarly consensus, Helyer argues that Peter penned this “second letter” (3:1) to the same exiled Anatolian believers addressed in 1 Peter. Peter’s prophetic warnings to deviant teachers rest on biblical stories which prefigure the climactic and destructive divine judgment that awaits them. Although 2:3 allows the possibility of annihilation, Helyer’s harmonization with Jesus and John pushes him toward an eternal punishment interpretation, with punishment rather dimly defined as exclusion from God’s presence. God’s apparently unfulfilled desire for all to come to repentance should not be simplistically resolved by “distinguishing between ‘desiring’ and ‘decreeing’ as two aspects of God’s will” (263). Helyer rightly allows this mysterious paradox to humble us. The new heaven and earth retains some continuity with the present cosmos, which, accordingly, will not be annihilated but renovated. However, it comes after the day of the Lord, when everything done in the earth will be revealed (rather than “burned up”). Thus a forceful warning remains for immoral teachers: judgment involves full disclosure!

The final three chapters sketch Peter’s legacy in history and tradition. It was nice to read excerpts from primary sources, which supply stories about Peter’s ministry and martyrdom in Rome. I appreciate Helyer’s affirmation that Rome’s historical primacy rests on Peter’s role there, his profound respect for Catholic tradition, and his recommendation of writings by Pope Benedict XVI (283, n. 31). These statements encourage evangelicals not to be scared or put off by Peter’s prominence, but to understand why it was deserved and to learn from it. In the non-canonical works attributed to Peter or containing legends about him, Helyer finds “a discernible trajectory . . . away from reliance on Gospel tradition toward more adventuresome embellishment and creativity” (300). The final, brief chapter reflects on Peter’s position with believers as a fellow pilgrim, pastor and a practical theologian of the cross. His balance between separatism and assimilation has proven difficult to maintain, so we must let him continually challenge us.

The Life and Witness of Peter has much to applaud. Beginning students will not be baffled by technical jargon (when used, it’s always defined), but will benefit from each chapter’s bibliography. Teachers can use Helyer’s thought-provoking questions as reading assignments or springboards for class discussion. Although Helyer’s purpose is not to break new exegetical ground, he does offer some fresh, insightful interpretations. For example, in Acts, he sees Peter using his “keys” to unlock the doors and admit people into the kingdom at three key turns: the Jewish Pentecost; the Samaritan Pentecost, when he crossed a hostile ethnic-religious barrier; and, most shockingly, the Gentile Pentecost, when the “massive wall” (78) excluding gentiles may not have been breached if Peter had not opened the door and welcomed them in! Also, in Peter’s instruction to suffering slaves, Heyler detects veiled allusions to the life of Joseph, whose diligence and submission won human and divine favor (Gen 39:21; 1 Pet 2:12, 20) and whose suffering served a redemptive purpose (Gen 50:20; 1 Pet 2:24).

Helyer’s discussion of 1 Peter 3:18-22 demonstrates his ability to swiftly maneuver thorny debates, point to relevant literature and draw out theological and pastoral implications without getting mired in exegetical minefields. This affirmation of “the central saving acts of redemption” aims to remind believers of the redemptive potential of unjust suffering and of their shared destiny with the vindicated and victorious Christ. Though persecuted and powerless, they can rest assured of salvation, like those in the ark. Though reviled and rejected, they must maintain a righteous witness, like Noah. Helyer reminds us that although the Western church is no longer a vulnerable minority, for whom retaliation is not a viable option, we should nevertheless remember that bearing unjust suffering with faith and without revenge testifies powerfully to a hostile world! Insights like these, sprinkled throughout the book, certainly grow out of Helyer’s own decades of pastoral ministry.

Only a few interpretive questions arose for me. Did the disciples really “intuitively know that Jesus is in some sense divine” (42) as early as Peter’s confession or did they understand “Son of God” as the Davidic king who would rule a restored Israel (Ps 2; 2 Sam 7:14)? While knowledge (which includes perceiving and obeying God’s will) is linked with salvation in 2 Peter, does this, without further exegetical support, justify the claim that “epignÅsis and gnÅsis. . . serve as a shorthand for salvation?” Should we say that “participation in the divine nature” is “Peter’s equivalent” to Paul’s concept union with Christ and John’s theology of mutual indwelling? Might such an equation obscure distinctive emphases? On the other hand, Helyer helpfully explains Peter’s influence on the Eastern Orthodox doctrine of theosis and differentiates participation from the Mormon doctrine of deification.

Although the book is well organized, I got disoriented a couple times, due to an inconsistent subheading on p. 169 and confusion about the outline of chapter 7, which I expected to unpack 1 Peter’s “three great Christological affirmations” (128) but was actually structured around five titles. Sidebars should have been either more frequent (there were only three) or eliminated, so they would not feel like unexpected intrusions. Finally, I wished for a discussion of the structure and literary flow of Peter’s letters, but this gap is a small trade to make for an otherwise complete and cogent contribution that combines biography, theology and history.

Helyer has done a great service in clarifying the teaching of the “prince of apostles” in order that we might “join Peter and follow Christ on the Via Dolorosa that leads to the Via Gloria” (305). Toward that end I recommend The Life and Witness of Peter as a helpful guide into the life, letters and legacy of a key Rock of Christian faith.