The Mirage Shall Become a Pool: A New Testament Theology of Social Justice and Charity 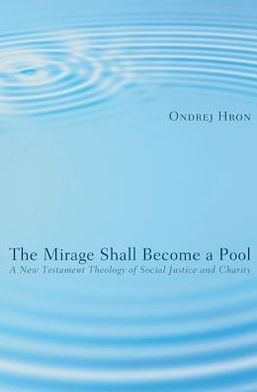 With countless recent books available on issues of social justice from an evangelical Christian perspective, and with interest in the issues at possibly a record level, one would imagine that there would be works readily accessible on everything the Bible, or even just one Testament, teaches on the topic.  There aren’t.  Zondervan has one advertised as coming in a few years’ time in their Biblical Theology of Life series, but otherwise the only such work of which I am aware is this new book by Ondrej Hron.

Czech-born but raised largely in North America, only to return to Prague for his Th.D., Hron has mastered key elements in the fields of philosophy, ethics, and economics as well as New Testament, which he teaches as Adjunct Professor at the Canadian Southern Baptist Seminary.  This work is a very sophisticated analysis of the results of a highly carefully crafted survey of relevant New Testament material.  Hron separates “social justice” from other forms of justice as that which is due distinctively to the poor.  He is interested particularly in countering Nicholas Wolterstoff’s campaign for all poor people indiscriminately to benefit from “sustenance rights,”—the right to have access to adequate food, shelter, health care, and a healthy environment.  Hron surveys the different political, economic, and psychological approaches currently competing for popularity, noting that none of them adequately distinguishes between mercy and justice.

Justice, for Hron, is “an interhuman moral impetus that extends an unconditionally binding…obligation” (p. 41).  Of Richard Hays’ taxonomy of deriving ethics from Scripture, only the “divine command” category is fully adequate, though timeless mandates may be derived not merely from explicit commands but also from “instructions,” and “valuations,” both explicit and implicit.    Even then, however, one must be careful.  Many texts that appear at first to treat matters of justice are mandates for mercy instead.  What is the distinction?  A justice mandate discloses any or all of the following three components: (1) that failure to practice it is considered sin; (2) that the consequences of such failure include divine judgment; and (3) Scripture labels it a matter of justice.  A mercy mandate, on the other hand, identifies itself with any or all of these four elements:  (1) its omission is not a sin; (2) its omission is not divinely punished; (3) its performance leads to divine reward; and (4) Scripture labels it a matter of mercy.

Turning finally to the New Testament material, Hron proceeds systematically through every divine mandate he can locate on his topic, classifying each as either an issue of mercy or one of justice.  The domain of mercy turns out to be lengthy indeed, encompassing such matters as almsgiving, sharing one’s resources, generous giving, hospitality, helping unbelievers, selling one’s possessions on behalf of the poor, and many other forms of compassionate deeds.  Some texts disclose high obligation levels, especially where the passage gives very concrete illustrations about how to meet a need.  But the only social issue that can truly be called an item of justice is our obligation to use our leftovers or excess resources for the alleviation of the misery of calamity-caused poverty among the non-able-bodied in our immediate spheres of influence.  There are plenty of other good things we may do with our possessions, which represent acts of mercy, but justice must take priority over mercy.  The most important passage in the New Testament for Hron’s scheme is Luke 16:19-31.  The parable of the rich man and Lazarus demonstrates the eternal punishment of the rich man for entirely neglecting Lazarus laying at his gate, without giving him even the scraps from his banqueting table.

Important corollaries follow from Hron’s conclusion.  We must assiduously guard against “enabling” the poor, in the psychological sense of the term, by giving them handouts when they could be working for a living.  We dare not give to everyone indiscriminately.  From Galatians 6:10 comes a priority for ministering to the household of God; from the parable of the Good Samaritan (Luke 10:29-37), a reminder that as occasion dictates we cannot neglect the non-Christian poor either.  With finite resources, every Christian individual, family and church finds their highest priority in meeting the most acute physical or material needs of fellow believers who are unable to provide for themselves.  Then other, discretionary deeds of mercy may ensue.

The exegesis of the numerous passages treated throughout this work is mostly solid.  Hron recognizes that “the least of these my brethren” in the “parable” of the sheep and the goats (Matt. 25:31-46) is referring to fellow Christians.  He notes the incipient capitalism of the parable of the pounds/talents and the importance of 2 Thessalonians 3:10 for prioritizing our charity.  He takes me to task for generalizing to the matter of “repentance” (illustrated by deeds of justice for the poor) with the rich man and Lazarus, but that is precisely what the rich man does with respect to his brothers (v. 30).  Hron correctly notes that there is no worked-out theology of fighting systemic evil and injustice in the New Testament but, because he is not treating both Testaments, he takes only a few pages toward the end of his study to look at a few key Old Testament texts that, as he notes, would offer additional justice mandates, still morally binding on believers today.  But unless one sees radical discontinuity between the Testaments, it is arguable that even a New Testament theology of a particular topic is incomplete unless Old Testament details (filtered through the grid of fulfillment in Christ) are similarly scrutinized.  At any rate, Hron does more than adequately refute Wolsterstorff’s concept of sustenance rights; at best we have rights to the most minimum of nurture and care available needed to survive and only if we have not forfeited them due to our indolence.

My two biggest concerns with Hron’s book deal with hermeneutical matters.  The first is that Hron appears to interpret the Bible along the lines of what Christian Smith calls a handbook model.  In other words, we may turn to it for God’s comprehensive will for his people in any area of life.  If a topic does not appear, then we must conclude that there are no divine mandates for us on that topic.  Second, and closely related to this point, is Hron’s failure to deal with the occasional nature of the biblical teaching.  If needy widows had not been a problem in Ephesus, Paul might never have written 1 Timothy 5 and a major chapter for informing New Testament social ethics would be missing from our “handbook”.  If the redistribution to the needy of alms given to the temple treasury had not been the pre-existing Jewish method for caring for their poor, several of Jesus’ teachings could have taken quite different forms.  And how significant are arguments from silence on topics like social justice?  Must every justice mandate have an explicit textual sign for us to label it as such?  Might God not have assumed when he gave commands on issues of poverty and riches, that he wanted people to obey them irrespective of whether a reward or a punishment was explicitly forthcoming, since he ultimately judges all people for what they have done with their entire lives?

A final matter involves style and proofreading.  Hron writes with regular rhetorical flourishes, some of which very much keep the reader’s interest.  But far too often he tries too hard and the result is dense prose, hard to follow.  An appalling number of sentence fragments of the kind that grade-school students should be taught to avoid appear throughout the manuscript (e.g., “That systematic theology is possible”; “Sometimes quite significantly”;  “Particularly from the position of our own enculturations;” “As denoting that some forms of giving are as unto God”), as well as a surprising number of misspelled homonyms and other malapropisms (“waiver” for “waver”; “fair” for “fare”; “boarder” for “border”; “gantlet” for “gauntlet”; “affect” for “effect”; “utilitarious” for “utilitarian;” and “on the onset” for “at the outset”).

Notwithstanding these criticisms, this book is well worth reading and scrutinizing.  For a long time it was assumed that there was no social ethic in the New Testament, simply because there were no direct commands that would form one, on a part with, say, believers’ evangelistic mandates.  Today, many people equally uncritically assume that social justice issues dominate the teachings of Jesus and the apostles.  Hron calls us to task for sloppy definitions, careless application, and failure to distinguish justice from mercy.  If some methodological questions still surround the enterprise, then let us come up with an even better alternative.  Meanwhile Hron’s distinctions and priorities should challenge us to take serious steps to help those in our world, especially our fellow brothers and sisters in Christ, who are desperately poor through no direct fault of their own.