The Rephaim: Sons of the Gods 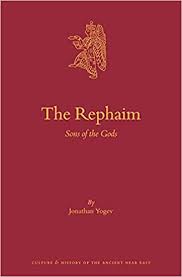 Yogev’s work has provided a useful review of available evidence on the Rephaim (or Rapum) in ancient texts as well as where much of the current discussion and debates lie.

Yogev begins with the Ugaritic evidence.  KTU 1.20 describes a group (perhaps seven or eight) of Rapum who are called both divine ones or gods and heroes or men (mtm).  They come to the feast on chariots that are used by warriors, kings, and deities.  Danilu is with them.  KTU 1.21 identifies a marzeach festival attended by the Rapum.  These feasts, enjoyed by the upper class, include drinking a great deal of wine and a great celebration or a time of mourning.  There is no necessary connection with the dead.  Yogev assumes that Ilu gives the invitation.  KTU 1.22 repeats the invitation to the Rapum.  It suggests that they interact with Baal, Anat, Ilu, and others.  Yogev asserts that they are demigod kings and leaders.  In the Aqhat myth, Danilu, the man of Rapu is mentioned.  He is a judge for the weaker members of society.  He is beloved by the gods and fellowships with them.  He is initially childless but has a daughter and a son by the end of the story.  As Yogev notes, Danilu is the most famous of the Rapum and the only one named in both Ugaritic and Biblical sources.  In the Baal cycle, the Rapum may be described as “under” Shapshu, the sun goddess; and they may be described as divine (KTU 1.6iv. 45b-46).

“The Rapum of the land” appear in the Kirta myth where they are in parallel with “the group of Ditanu.”   Yogev suggests that these are Rapum who are alive.  The name Ditanu, perhaps a dynastic founder, also occurs in two Assyrian lists as well as the genealogy of the Hammurapi Dynasty.  Always in the middle of the list, this name suggests a common, early origin. Perhaps Ditanu was an ancestor of the kings of these various dynasties.  The name Dtn also occurs in KTU 1.124 where it is associated with the healing of a boy. Yogev denies any association of this figure with the Ditanu because Kirta is not healed nor do the Rapum have anything to do with healing.  Ditanu may be an ancient Syrian ruler from the third millennium who became associated with the Rapum.  The assumption that Ditanu and the Rapum cannot be associated with healing is more associated with absence of evidence than anything positive.  Healing deities or demigods are not obligated to heal every figure, even favorites of Ilu such as Kirta.  Further, it is difficult to explain the origins of Dtn in KTU 1.124 otherwise.

Of special interest is KTU 1.161 where the last king of Ugarit, ‘Ammurapi, appears at the end of a line of the previous kings of the city along with some unknown figures.  These are generally connected with the Rapum, especially Niqmaddu, ‘Ammurapi’s immediate predecessor, who is descending into the underworld to join his predecessors.  Only in this text from Ugarit are the Rapum explicitly dead (with the exception of ‘Ammurapi).  And these are not all the kings but a selection of them, including Didanu/Ditanu who is part of the first known dynasty.  Further, some of these designated as Rapum may not be kings but heroes of another sort.  The ancient Rapum are invoked first, followed by the more recent Rapum.  Yogev argues that kings were Rapum both before and after they died.  Items of furniture (throne, stool, table) symbolize the king.  The Rapum escort the king into the Underworld at this memorial service.

KYU 1.108 is a song welcoming the new king, who is designated as Rp’u, king of eternity.  Ilu dwells in Astarte and Edrei, to be connected with the Bashan area of Og, last of the Rephaim, in the Pentateuch and to God’s mountain in Psalm 68:16-17, 23.  Yogev sees each of the kings as presented as descendants of the gods.  Musical instruments accompany this coronation as does a homage to the goddess Anat.  The blessing of “eternity” here is one that Yogev understands as an eternal dynasty.

Amorite personal names such as ‘Ammurapi witness that the Rapi/Rapum were present long before Ugarit came into the picture.

The Phoenician evidence for the Rapum consists of three texts, two burial inscriptions at Sidon from the mid-first millennium BC and one inscription from Tunisia from the early centuries AD.  From Sidon the sarcophagi of Eshmunazar and of Tabnit both have curses written on them for anyone who would disturb the body and other contents.  Included in these curses are a denial of joining the Rapum in burial.  The later inscription is a broken text from El-Amruni that seems to mention the Rapum.  A deity appears throughout the first millennium BC and into the Roman period.  Its name is šdrp’.  The first part of the name may represent the word for demon, shedu, or for mountain, shadu.  There is a month name and a single personal name that may contain Rapum, but this is not certain.  Otherwise, the Phoenician evidence points to the Rapum as dead figures that it was considered a blessing to join and a curse to be prevented from joining in the afterlife.

The final area of evidence comes from the numerous Hebrew Bible references to the Rephaim.  Yogev argues that these consistently portray the Rephaim in a negative light.  They are either dead or being put to death.  Further, while they may have been kings or great warriors in their earthly life, they are rejected by God and by Israel.  Yogev considers the Nephilim of Genesis 6:1-4 as those who attempt to disrupt the boundary between the divine and human as Sons of God take daughters of men.  The Nephilim are again mentioned in Numbers 13:33 where they are identified with the giants in the land of Canaan that the spies explore.  These giants are connected with the Rephaim.  The Septuagint translates both terms as giants or titans.  Yogev argues for two main traditions of Rephaim, those in Transjordan and those in the land of Israel.  The former, centered in the area of Bashan, are all killed except king Og who alone survives to die at Israel’s hand.  Both Rephaim and Giants are present in Israel.

Yogev notes the reference to the Rephaim in Genesis 14:5 (cf. Deuteronomy 20:10-11, 20-21).  There are major reasons why the tradition behind this event cannot be dated to the 8-7th centuries BC as Yogev suggests (p. 132).  Not least is the fact that only in the Mari correspondence (18th century BC) do the armies of Elam reach as far west in the ancient Near East as required to come to Transjordan.  It is simply a fact that at no time after the Middle Bronze Age could such a coalition of kings from the nations identified have crossed the territory of the ancient Near East and invaded the territory they did according to this text.  The connection of the Rephaim with Ashteroth Qarnayim and the connection of this site with Ashtaroth in the Bashan comports with the evidence in Genesis 14 as well as the evidence from contemporary Amorite names of the Middle Bronze period that contain the Raphi- element.  Cf. Mary E. Buck, The Amorite Dynasty of Ugarit (Leiden and Boston: Brill, 2020), p. 331.  By assigning a later period (1,000 years later) for the Genesis account, this important connection loses its significance.  However, Yogev is likely correct that the Emim and Zamzumim were alternative names for the Rephaim in Moabite and Ammonite traditions.  The same is true of the Nephilim in sources mentioned in Genesis 6 and Number 13.  Deuteronomy 3:11 connects Og of Bashan with the Rephaim.

The land of the Rephaim, as described in Deuteronomy 3:13 and Joshua 12:4-5; 13:11-12, included Mt. Hermon, the Bashan, and the northern half of Gilead.  This connection also appears in KTU 1.108, 2-3 where Ilu is connected with the sites of Ashtaroth and Edrei in this region.  The second region of the Rephaim, that west of the Jordan River, is mentioned in God’s gift of this land to Israel in Genesis 15:20 and Joshua 17:15.  Although Yogev prefers the Rephaim in Genesis 15:20 to be a mistaken reference to those east of the Jordan, such constraints are not necessary as there are Rephaim giants associated with the Philistines in 1 Chronicles 20:4-8 (the time of David) and 2 Samuel 21:15-17.  This may be related to the Valley of the Rephaim southwest of Jerusalem and mentioned eight times in the Bible (Joshua 15:8; 18:16; 2 Samuel 5:18, 22; 23:13; 1 Chronicles 11:15; 14:9; and Isaiah 17:5).  Yogev suggests that this was an encampment by the Philistines against Israel.  He may be correct that the tradition placing the Rephaim in the Bashan was original.

The Rephaim also appear in the Bible in the place of death.  Isaiah 14, the prophecy about the casting down to the dead of the king of Babylon (and the mytho-poetic connection with Helel Ben Shahar, the morning star) is a contrast to KTU 1.161.  There the king is buried and descends to be greeted by the noble Rephaim in the Underworld.  Here the king is left unburied and descends to the Rephaim to be ridiculed by them.  In Isaiah 26:13-19 the dead rulers who are Rephaim will not rise unlike others.  Yogev goes so far as to conclude that “resurrection is possible for everyone except the Rephaim” (p. 158).

Dan’el (= Ugaritic Danilu) in Ezekiel 14:12-20 and 28:1-9 is described as a righteous and wise figure.  As he may well have his origins in the same Dan’el of the Aqhat epic at Ugarit, and as he is there identified with the Rapum, he does not fit well with the negative assessment of the Rephaim that Yogev finds elsewhere in this Biblical text.  Yogev explains this tradition as “remnants of the ancient tale [that] were still in use” (p. 163).  This may be but it does suggest a wider understanding of the Rephaim than only a negative one.  Psalm 88:11; Job 26:5; Proverbs 2:18-19; 9:18; and 21:16 all confirm the God-forsaken nature of the Rephaim, buried in the deepest part of the Underworld and without hope of redemption.  Yogev is correct in seeing the teraphim and the reference to physicians in 2 Chronicles 16:12 as likely unrelated to the Rephaim.

Overall the Bible does portray the Rephaim as giants and warriors, kings and heroes of old, and seemingly mythical in origin.  Yogev is correct that there are similarities in origins (especially with reference to Bashan) and in “occupations” of the Rephaim (kings, heroes, etc.) between the Bible and the evidence from Ugarit and Phoenicia.  However, the Bible does have a negative assessment in which these figures are the worst of mankind with a fate appropriate to that.  Ugarit and Phoenicia see them, however, as demigods who symbolize the best of humanity.  This general assessment is true and convincing except for the Exekiel 14 and 28 references to Dan’el.  For this reason it may be better to see these figures as legendary and fallen heroes of old whose origins are murky from the Biblical standpoint, although left to face judgment for the pride and violence that often characterized their life – but, as the figure Dan’el suggests, not always.  Cf. R. Hess, “Nephilim,” Anchor Bible Dictionary IV 1072-73, for a similar assessment of the Nephilim.