The Soul of Shame: Retelling the Stories We Believe About Ourselves 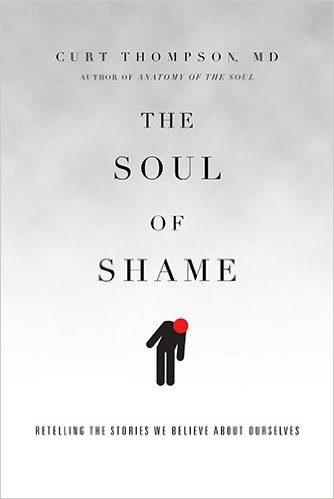 Curt Thompson, MD, is a practicing psychiatrist and the founder of the Center for Being Known, an organization that seeks to train leaders in the connection between spiritual formation and interpersonal neurobiology (IPNB). The Soul of Shame is Thompson’s second book. His other book, Anatomy of the Soul, is on spiritual formation in the context of IPBN.

The Soul of Shame deals with the fascinating study of shame, the brain, and how it affects human relationships. It also looks at this from the narrative of the Bible, God’s plan to restore humanity through Jesus to the joy of creative calling. Throughout the book, shame appears in personified form. It is the tool that evil uses to destroy and fragment the human psyche and relationships. From the Garden to the City of God, shame dogs the steps of human beings, those storied-creatures who are always fashioning narratives for themselves. The knowledge of the love of God in Jesus and vulnerability before God and others is the route to the joy of creative calling. The book is worth reading for anyone interested in neurobiology, shame, vulnerability, counseling, and related theological concepts.

What exactly is shame? It begins with emotional feelings of inadequacy and worthlessness. Over time it yields complex neural networks in the brain that continually reinforce themselves in experience. Much of this comes from the quality of early relational attachments. Eventually, shame-filled people build narratives about themselves to explain the feelings of shame, such as, “I never do well.  What’s wrong with me?” This leads to an attitude of judgment towards self and others and many other destructive behaviors. Shame not only leads to sin, but also hides from knowledge. It refuses to be known and must be dragged into the light. Thompson concedes that he does not mean to talk about the degree to which shame is a good thing or whether society is shame-based. He focuses more on shame as a sense of worthlessness.

Thompson labors to explain precisely how shame affects the mind. The mind according to IPNB is a “fluid emerging process that is both embodied and relational, whose tasks is to regulate the flow of energy and information” (39). Shame disintegrates the processes of the mind, leading to chaotic states of thought and problems with relationships. However, this neurological reality yields hope because of neuroplasticity. Shame-filled people can focus on new things and rewire their brain chemistry.

Thompson elaborates that joyful relationship is the antithesis of shame.  Mature, secure attachments cause shame to shrivel. Joy is also the harbinger of secure relationships while shame is the harbinger of abandonment. Thus, shame signals that relationships are in danger. Moreover, everyone must relearn a Biblical view of relationship with God as a delighting and loving Father. It is through a dynamic, vulnerable relationship with God in Christ–something Thompson refers to as “being known”–that shame begins to lose its power. The last three chapters discuss how to uproot shame from communities such as families, schools, and businesses. People need a “great cloud of witnesses,” others who can empathize with them. Through vulnerability, communities defeat shame, leading to more creativity and joy.

The book has many strengths. It has lucid and profound explanations of how shame affects IPNB, and deep and penetrating insights into the Scriptures. Further, there are many practical applications for strengthening joy and weakening shame in families, churches, businesses, schools, and so on. Moreover, there are keen devotional insights that makes reading the book a delight.

A weakness of the book is, at times, its lack of theological clarity. Thompson likes to speak of God as a risk-taker or as having faith in humanity. In short, he likes anthropomorphism. Anthropomorphism is a good thing that the Bible itself uses, but authors who use them should explain them. The book also omits any discussion on justification, an appropriate antidote to shame.

Another fascinating aspect of the book concerns shame in connection with the philosophy of faith and reason. Thompson points out that people are often paralyzed by shame when they think of how little they know. Many think they must either have absolute certainty or live with skepticism about knowledge. Thompson points out that certainty is not so much the goal in relationship with God but rather a love relationship. This contains a kernel of truth for anyone seeking to discuss the gospel with a person who is unconvinced. Certainty is not the central point in a relationship with God, but more nuance is needed here.  For example, certainty comes in degrees. Ignorance or uncertainty are not virtues either.  The Scripture often speaks of confidence, something that includes reason (Hebrews 10:35; 1 Peter 3:15; 1 John 5:13). Intellectual confidence is a better notion than the commonly held false dilemma between certainty and uncertainty. On the other hand, Thompson’s point about shame for lack of knowledge should not be underestimated. Christians should affirm how difficult it is to believe in the gospel. They can also point out the notion of confidence and the false dilemma between certainty and complete skepticism.  This will alleviate shame over lack of certainty without denying that the Christian faith is reasonable.

Curt Thompson has given Christians a valuable resource for overcoming shame. He eloquently contends that Christians can be healed of shame through vulnerable prayer, knowing God’s love, and supportive relationships.  Not only this, but they can be freed to pursue what they were created to be, image bearers pursuing creative calling.