The Text-Critical Use of the Septuagint in Biblical Research 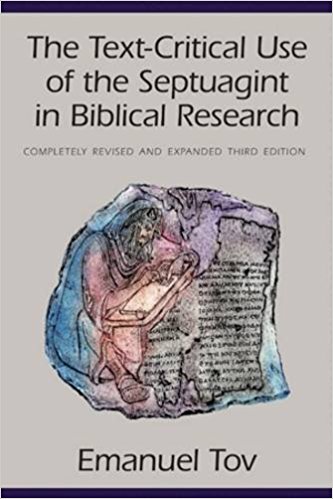 Emanuel Tov may be the greatest living scholar of text criticism of the Dead Sea Scrolls, the LXX, and the Hebrew Bible.  This work, however, is not an introduction to the LXX or other texts.  It is intended as a guide for using the LXX in the study of the Hebrew Bible.  I used the first edition (1981) years ago when preparing for my doctoral examinations.  I have been delighted to see that the work has been well received, passed through a second edition (1997) and now, some thirty-four years after the first English edition, a third edition.  Contrary to the popular view that textual criticism is concerned with restoring the original text of Scripture, Tov makes the important point on p. 3:

…as a rule, textual criticism of the Hebrew Bible aims neither at the compositions written by the biblical authors, nor at previous oral stages, if such existed, but only at that stage (those stages) of the composition(s) that is (are) attested in the textual evidence.  The very assumption of earlier stages is based merely on logical deductions and cannot be proven.

In this way Tov does not consider hypothetical oral traditions behind the written text.  His work remains closely attached to the extant manuscripts, and he is correct in pursuing such a method.  However, he does recognize a kind of multiple set of “original” texts that emerged in the process of literary formation, as well as the variants that appeared after the final literary composition.  The book divides into two larger parts.  The first (chs. 2-5) considers the listing of variants (differences from the Hebrew text) while the second considers how the variants may be evaluated (chs. 6-8).  These are the two tasks of textual criticism.  For translations of the Hebrew, such as the LXX, it is important to retrovert or retranslate the Greek text back into the Hebrew from which it was translated.  This task is easier where the translation is literal, while it is more difficult to accomplish accurately where the translation is paraphrastic.  Tov makes the important point that the style of translation also remains crucial and that this changes for the most part book by book.  Thus it is very important to understand the style of translation of a given book of the LXX.

For literal renderings Tov summarizes the criteria for retroversions as follows:  internal consistency; the representation of the constituents of Hebrew word (e.g., prepositions, pronominal suffixes) by separate Greek equivalents; word order; quantitative representations (one-to-one Hebrew to Greek representations); and, more subjectively, the linguistic adequacy of lexical choices.  Literal translations will use stereotyped renderings, follow the Hebrew word order, and represent Hebrew elements of the Masoretic Text in a quantitatively equal fashion.  At the end of ch. 1 Tov provides useful guidance for the best lexica, grammars, translations, editions, and electronic tools.  He ends this chapter with some observations on the undervaluing of the LXX for textual criticism.

Recognizing that any translation includes deviations from a literal rendering and that the later copies introduce errors and, for various reasons, changes, it is nevertheless important to begin with a retroversion from the LXX to the Masoretic Text, where that is possible.  This task requires a one-to-one correspondence between the Septuagint and the Hebrew of the Masoretic Text.  A key part of this process is the translator’s style in rendering the book or section in which the text appears.  Free translations will result in fewer LXX/Masorteic Text concurrences.  Like variants, additions, omissions, and substitutions can function exegetically.  Scribal errors that occur in Hebrew manuscripts can also occur in Greek manuscripts and in their translation from the Hebrew.  These can include omitting or repeating a word or words, as well as confusing letters that look alike, dividing consonant clusters differently, and those that reflect the distinctive character of the biblical book or translator.  In general, the more literal or stereotyped a translation is, the easier it is to reconstruct the original text with some certainty.  Different vocalizations of the text and theological tendencies, such as the elimination of anthropomorphisms of God, affect retroversions.

Tov identifies what he calls “intuition” as an important element in the retroverting of variants.  Thus the Masoretic Text of Jer. 2:16 “they will break your head” is found in the Septuagint as, “they have known you and mocked you.”  This difference is based primarily on the reading of several occurrences of dalet as resh and vice versa.  In another criterion, designated as “linguistic probability,” Tov places the line in Jer. 6:25 that the Masoretic text translates, “the enemy has a sword, terror is on every side.”  With the omission of a vowel letter and a different word division, we have the Septuagint’s, “the sword of the enemy dwells on every side.”  The famous “in the valley of darkness” of Ps. 23 becomes “in the middle of the valley of the shadow of death” in the Septuagint by reading the Hebrew “valley” as the Aramaic “middle,” with virtually identical spelling.  The “External Support” criterion looks at Qumran scrolls and tries to retrovert from non-Masoretic text traditions in comparison with the Septuagint.  Scrolls such as 4QJerb,d and 4QSama provide frequent support of the Septuagint against the Masoretic Text.  They are particularly helpful with external support.  Known scribal errors in Hebrew, Hebraisms (syntactical features unique to Hebrew), and known Greek-Hebrew equivalents can provide legitimate retroversions.  However, it is difficult to know if such retroversions existed or are found only in the mind of the modern scholar.

Turning to the implications for vocalization and other elements not found in the preserved consonants of the original Hebrew text, Tov assumes the oral reading of Scripture was present at the time of the creation of the Septuagint.  There seems to be wide agreement between the Masortic vocalization and that found in the Septuagint.  However, there are examples of the translators vocalizing and reading an Aramaic term in the midst of a Hebrew text (e.g., Judges 5:30).  However, there were also basic differences in the vocalizations found in the Masoretic texts, and those that are attested in preserved elements of Origen’s second column.  Furhter, there is the sin/shin difference, preserved in the pointed text but not earlier in any written form; and the manner of word division, pluses, minuses, and textual transposition.

Tov notes that the largest collection of retroverted variant words occurs where there is a difference of one or a few Hebrew letters between the retroversion and the word in the Masoretic text.  Personal names provide a special insight into this matter as such names do not depend on translation technique.  In words in general, one can see differences created by letters that appear similar:  dalet and resh, yod and waw, bet and mem, he and het, and samek and mem, nun and resh.  Tov also notes examples where similarly sounding letters have created variants:  gutterals, palatals, dentals, labials, and sibilants. Excurses to this chapter consider the increased presence of defective writing in the earlier period, the use of abbreviations (especially the yod to replace the divine name), the possibility of graphic variants in paleo-Hebrew script (e.g., ’aleph and tov), and variants in retroverted recensions or revisions of the LXX.

There are also examples of where it was thought that some MT/LXX deviations were not variants.  This is no longer so clear as Hebrew manuscripts from Qumran confirm the presence of these deviations in Hebrew.  Deviations can occur in grammatical categories that Tov identifies as connective waw/kai, singular/plural forms, pronouns, active/passive verbs, prepositions, and the presence/absence of the definite article.

A pseudo-variant is one that existed in the mind but not in the manuscript of the translator’s Vorlage.  This can be reflected by the interchange of some similar letters in Hebrew words (as already noted).  It can also happen in etymological exegesis.  Here the consonantal text does not change but the manner in which the word’s root was identified.

Tov has many significant reflections in his discussion of the Hebrew text underlying the Septuagint.  Among these are the view that here is no single Septuagint text-type.  The work is a heterogeneous collection.  The longer Masoretic editions of Jeremiah, Ezekiel, and 1 Samuel 16-18 probably witness a linear development from earlier short editions that may be found in the Septuagint and in 4QJerb and 4QJerd.  Whether one agrees with him or not, Tov’s observation in a note at the end of chapter 6 needs to be taken seriously (p. 223 n 46):  “My intuition tells me that more often than not the LXX reflects an earlier stage than MT both in the literary shape of the biblical books and in small details.”

Tov provides a bibliography on the study of Septuagint textual variants in chapter 7, as well as a listing of significant text critical commentaries on biblical books of the Hebrew Bible.  He notes the subjective nature of judgments as to which of two different readings is original and so can best explain the emergence of the other reading.  Further, rules such as “the more difficult reading is to be preferred,” are subjective and not necessarily useful.  Common sense is more important than rules.  A comparison of the treatment of variants in BHK, BHS, and Quinta, as well as a list of major differences in the Hebrew Bible and the LXX, conclude Tov’s work.

This is a very useful work.  In addition to the general arguments, principles, and guidelines described above, the multitude of examples are well presented and carefully discussed.  They indices should be consulted by those working on specific texts so as to incorporate any textual discussions.  Overall, the new edition updates earlier work and provides clarity and guidance.