The Theology of the Book of Amos 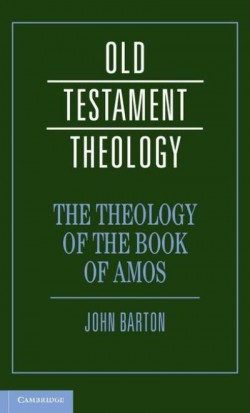 John Barton, Oriel and Laing Professor of the Interpretation of Holy Scripture at Oxford University, has worked on the book of Amos for decades, so it is fitting that he contribute the volume on this prophetic book in Cambridge University Press’s Old Testament Theology series. This book takes a moderately critical stance throughout and surveys most of the current research on this prophetic book.

The first chapter reviews studies in three areas: the history of the composition of the book of Amos, its relationship to the Twelve (the collection of the Minor Prophets), and hypotheses concerning how much of the book can be traced back to the prophet himself. Barton divides views on the composition of the book into four camps: those that hold that the book comes substantially from the eighth-century prophet (a minority stance, he says, but with a few important voices), the majority view that the book is the product of a process of editing, literary approaches that stress its artistry, and those that propose that the book is a post-exilic creation.

Barton places himself within the second camp and supports the recent suggestion by Tchavdar Hadjiev, who argues for four editions in The Composition and Redaction of the Book of Amos (de Gruyter, 2009). The first, the “Repentance Scroll” (which he believes went through two phases), consisted largely of chapters 3 to 6 and was collected by the prophet’s disciples before the fall of Israel in 722 BCE. The “Polemical Scroll” was made up primarily of five of the Oracles against the Nations (Amos 1—2), the five visions of chapters 7—9 and the narrative of 7:10-17. Much of this scroll also is material linked to the prophet. The “Liturgical Scroll” combined these two scrolls and inserted the doxologies (4:13; 5:8-9; 9:5-6); supposedly, it was crafted in seventh-century Judah. The fourth and last edition arose during the exile. It added the two remaining Oracles against the Nations (1:9-12) and the epilogue of 9:11-15.

In the rest of the opening chapter the author deals with the possibility of the Minor Prophets being a deliberately collected literary-theological unit and discusses in some detail the amount of material in the book of Amos that might be authentic. Concerning the former, Barton recognizes lexical connections between a few of these twelve books and acknowledges that the collection can be read as a coherent whole. He is not convinced, though, that its present shape actually is the product of deliberate editorial work. As to the second issue, Barton explains why he believes certain passages are secondary. Following longstanding critical consensus, he lists these as 1:1, 1:2, 1:9-12, 2:4-5, 3:7, the doxologies, 5:25, 5:26-27, 7:10-15, most of chapter 8, 9:8b, 9:9-10, 9:11-12, and 9:13-15.

In chapter two Barton presents what he believes were Israel’s religious beliefs at the time of Amos’ ministry. He extracts Israel’s views from the book by pointing out against what Amos spoke. In Barton’s reconstruction, covenant and election were not part of the theology of the day, and the nation was polytheistic. The prophet would have coupled belief in some sort of universal moral code (particularly in regards to war) with the conviction that Israel also would be judged, a conviction that probably would have surprised many. Amos also contradicted the popular thinking of the Day of Yahweh as a time of victory (5:18-20) and prioritized moral conduct in community over Israel’s nationalistic religion.

Chapter three of The Theology of Amos is the first of three on the book’s theology, each of which is linked to hypothetical stages of its composition. The earliest stage (the material from Amos and his disciples), Barton believes, was based on an “incipient monotheism” and the conviction that Israel’s special relationship with Yahweh (perhaps conceived as a contract not a covenant) made it responsible for its actions. Barton thinks that Amos may have repudiated too tidy a notion of that unique status (cf. 6:2-3; 9:7). Unlike the common ancient Near Eastern idea that divine judgment was rooted in the deity’s displeasure at inadequate sacrifices, Amos proclaimed that social sins had triggered Yahweh’s wrath, a message that appealed to self-evident moral norms. Amos, like other eighth-century prophets, condemned the cult because it ignored ethical demands. Barton engages the longstanding debate about whether Amos preached repentance or just announced doom. His view combines both options: the prophet held out for hope for something after the imminent disaster.

In chapter four the author lists the theological themes of the alleged additions to the words of Amos and his disciples. These are, among others, God’s covenant with Israel as a reason for punishing another nation that had attacked them (1:9-12), the importance of Torah obedience (2:4-5), a more developed view of the role of prophets (3:7; 2:11-12), the introduction of the sin of idolatry (5:26; 8:14), divine discrimination in judgment (8:8-10), and a more optimistic view regarding the restored house of David and the transformation of nature (9:11-15).

The fifth chapter deals with what Barton calls the “finished book” of Amos—that is, the final product of the redaction process. The discussion focuses especially on how the last additions to the book (according to his reconstruction) qualified the message of earlier redactions by limiting the idea of utter disaster and reshaping it as a word for posterity. Other strategies look at the book literarily (whether as the sequence from judgment to hope or as a book-length chiasm with its center at 5:8-9 and its message of judgment) or canonically (holding judgment and hope in tension). In sum, there are various ways of construing the theology of this prophetic book, depending on how it is analyzed.

Chapters six and seven survey the reception of the book of Amos. In the former, Barton briefly comments on possible allusions to and the citations of Amos in later prophetic books, the Apocrypha, the New Testament, the Qumran material, rabbinic literature, the early Church Fathers, the fifteenth-century Dominican Savonarola, the Reformers, and Liberation Theology. In chapter seven Barton discusses a series of themes in Amos that he feels can contribute to contemporary theological reflection. He argues that the book’s presentation of a universal deity who also has a relationship with his people resonates with beliefs today, though we may be reluctant to endorse its view of comprehensive corporate judgment. Among other issues, Barton argues that Amos’ connection between ethics and faith was novel in the ancient Near East and that Yahweh probably was not that interested in Israel’s rituals. He does not think that the book’s (or, in fact, the Bible’s) insistence on God being behind natural disasters and war is acceptable for modern faith, nor does he see believers today accepting the vision of future judgment and restoration as literally true. The Theology of Amos closes with a list of recommended resources on various topics in Amos research and author and Scripture and Apocrypha indices.

As are Barton’s other publications on the book of Amos, The Theology of the Book of Amos is historically driven with a strong allegiance to critical theory. This work is different from the previous volumes in this series on Jeremiah by Brueggemann and Genesis by Moberly, which concentrate on the canonical form of those two respective biblical books as the basis for developing a theology. Barton is most interested in tracing the development of the theological streams in this prophetic book through its editorial trajectories. If one is skeptical of this kind of reconstruction—for textual (Can these passages be categorized so neatly into different time periods?), historical (Can we at over twenty-seven centuries remove so confidently determine what the prophet could and could not have believed?), and theological (What would this volume look like if Barton saw greater coherence in the book of Amos?) reasons—then the reader will be less than convinced by this presentation. The Theology of the Book of Amos, however, can serve as a wonderful up-to-date introduction to current Amos research, and that is the primary value of Barton’s work.