Through the Eye of a Needle: Wealth, the Fall of Rome, and the Making of Christianity in the West, 350 – 550 AD 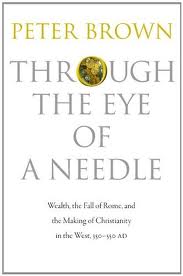 Over the past year noted Roman Catholic historian, Garry Wills, and Al Mohler, president of Southern Seminary the pre-eminent educational institution of the Southern Baptist Convention, both encouraged their respective constituencies to read Peter Brown’s latest work Through the Eye of a Needle.  When two such prominent personalities from such diverse religious perspectives commended the same book, my curiosity was instantly aroused.  So I quickly grabbed a copy and immediately discovered that it did not disappoint.  While it’s something of a doorstopper – 530 pages of text with an additional 229 pages of notes, bibliography and index – it’s also nothing less than a masterpiece of historical scholarship.  As perhaps the finest historian of late antiquity and Christianity, Brown brings together an abundance of source material, a brilliant analytical interplay between history, sociology and theology and some fascinating biographical sketches of key figures in that era to address a fundamental question:  how did the Church accommodate itself to an enormous infusion of wealth from the late 4th century on?

In order to answer that question Brown employs a geographical, chronological and biographical approach.  Weaving these together, he begins with the early fourth century, a time that he labels ‘an age of gold.’  Here he demonstrates that by the Constantinian era the vast majority of Christians were of the ‘middling sort’ – neither poor nor significantly affluent.  In fact, while Constantine’s legalization of the Faith gave it a public forum, it did nothing to enhance its material prosperity; that came in the last quarter of the fourth century.  Before that most Romans believed that generosity towards their own city was the highest possible expression of personal and social virtue.  But it was at this point that the cumulative effect of Christian teaching over the prior three centuries began to do its transformative work.  When those of affluence became believers – a growing trend in the late fourth century – they entered a new imaginative world where earthly wealth could become treasure in heaven.  As Brown notes, late Roman Christians of all classes and levels of culture took the sayings of Jesus about money seriously.  And preachers did their best to drive home these ideas to their congregations by encouraging them to give not to the city but to the church.  Thus, from the late fourth up through the late sixth centuries the Church of the Latin Roman Empire became not only increasingly rich but the most dominant institution in what we now label Western Europe.

But that was not at all the whole story.  As he tells this tale, Brown includes a geographical focus combined with a cacophony of both Christian and non-Christian voices on the topic of money.  Bouncing back and forth across the Mediterranean as well as from Spain further east to Italy – and even a bit to the Holy Land – Brown blends together the rich tapestry of diversity that made up the church and empire from the fourth to the sixth centuries.  People from different regions in different times took varying views of wealth and how it should be used.  For example, Symmachus, a pagan noble of the fourth century, exemplified the classic Roman attitude that one should be greedy for the good of the city.  The Christian writer Jerome strenuously argued that it should be given to the righteous poor, meaning ascetic scholars like him.  Augustine, on the other hand, argued that wealth should be used to build the church – meaning its buildings, monuments and resources so that it could expand its ministry.  By taking this approach Brown is able to accomplish his larger purpose:  to enter the very heart of late Roman society in order to discern its tensions, disruptions and changes as the classical era faded and the foundations of the medieval era were laid.   More specifically, he notes that…

…[my goal]…is to use the theme of wealth itself as a doctor uses a stethoscope.  Through paying attention to the issue of wealth, we can listen in to the Roman empire of the West in its last centuries and to western Europe as a whole in its first century without empire….it was only by keeping together the abundant discourse on wealth generated in the pagan and Christian literature of the period with a sense of the realities of wealth in a Roman and post-Roman society that I could use the issue of wealth as a diagnostic tool in order to listen in to the process I have called “the Making of Christianity in the West.” (p. xxvi)

From a chronological perspective the most important part of the book may be the period from 370 to 450, an era in which traditional ideas about how wealth should be properly used underwent an ideological transformation.  This was not only a time of theological debate about money but also the age of barbarian invasions, a sequence of events that radically changed everything.  Family fortunes that had accumulated over the decades were quickly swept away and the old Roman aristocracies began to collapse.  But the customary way of life with its stress on giving to one’s city did not immediately disappear; it only went down after a long fight.  It was at this moment that the Church began to make its physical and theological presence felt.  Pastoral power began to displace that of the imperial magistrates and bishops began to manage the new infusion of wealth on behalf of the poor.  While all of this was contested and only took place over a number of decades, by the end of the fifth century the Church in the West was the single wealthiest institution in a world of scarcity.

One of the key arguments that Brown makes along the way is how the Church eventually reconceived poverty not merely as economic deprivation but as social, political and personal vulnerability.  Integrating various strands of biblical teaching on the poor, Christian leaders began to ‘re-imagine’ them as those needing not merely food and clothes but systemic justice.  In Brown’s opinion, this redefinition had a profound two-prong impact.  First, it facilitated the victory of Christianity in the cities throughout the course of the fifth century because the Church moved beyond mere charitable relief to a strategic implementation of social and economic justice.  Second, the re-conception of who the poor were and what they needed allowed for a more inclusive approach towards the wealthy thereby allowing the rich to slide thru the ‘eye of the needle.’  All this was reinforced by Augustine’s teaching on the close connection between material gifts and the reception of God’s forgiveness. The entire process might be interpreted as something of a spiritual quid pro quo that was to have profound theological and ecclesiastical consequences.  As Brown demonstrates, by the end of the sixth century all the pieces of the medieval penitential system, including indulgences, were firmly in place.

Brown laments that Through the Eye of a Needle was his most difficult book to write to date, mostly because of the explosion of work in late Roman studies over the past few decades.  Yet it seems as if he’s read everything in the field; almost every page reveals his encyclopedic knowledge of late antiquity and its interaction with Christianity.  While I’m confident that scholars of this era know of such people as Paulinus of Nola, Valerius Pinianus and his wife, Melania the Younger, and Salvian of Gaul, they were all new to me and I’m quite glad to have made their acquaintance.  As Brown shows from their examples and others, time and again Christians of great wealth used their resources in a variety of ways to demonstrate their commitment to Christ and His call on their lives.  Some followed the path of ascetic renunciation while others leveraged material wealth to assist their church and its bishop to extend both the visible and spiritual parameters of Christianity in a city or region.  Thus, while Jesus may have called the rich young ruler to ‘sell everything and give to poor,’ innumerable Christians in the later Roman Empire interpreted the specific application of that command quite differently.

Does a book such as this have anything to say to contemporary Evangelicals trying to live both faithfully and effectively for Christ in the midst of an increasingly materialist culture?  I think it does in at least three ways.

First, Through the Eye of a Needle demonstrates the ubiquitous nature of wealth in human life.  Money was of great significance to the people of late antiquity, Christian or pagan, just as it is today.  It’s not going away and, in our more honest moments, we don’t want it to.  As this book shows, when it comes to human nature some things never change.

Second, in light of the ever-present reality of money – and in our contemporary setting even enormous amounts of wealth – it behooves Christian leaders to think hard and to dialogue openly about the theology surrounding money.  For example, given that Jesus was supported by people of means such as Lazarus, Mary and Martha and the women listed in Luke 8:1-2 as well as being buried in a rich man’s tomb, what exactly did He intend in his statement about the rich and the eye of the needle?  And what does his comment in Luke 16:9 about using ‘unrighteous mammon to secure heavenly dwellings’ really mean?  Through more study and discussion we may, in time, discover that there are theologies of wealth rather than a singular view.

Third, wisdom would dictate that contemporary Christian leaders, teachers and pastors become more conversant with the reality – and potential – of money. The last thirty years have unequivocally demonstrated that we now know how to create wealth.  But the larger – and more spiritually important question – is how to encourage its use for the advance of the Gospel and the good of people without either baptizing it as godly or decrying it as ‘worldly’ or ‘filthy lucre.’  As Peter Brown has brilliantly demonstrated, wealth always has consequences, especially for the Church.  May the readers of this multi-faceted and provocative book be moved to meditate on what those might be in the 21st century.