Weakness is the Way: Life with Christ our Strength 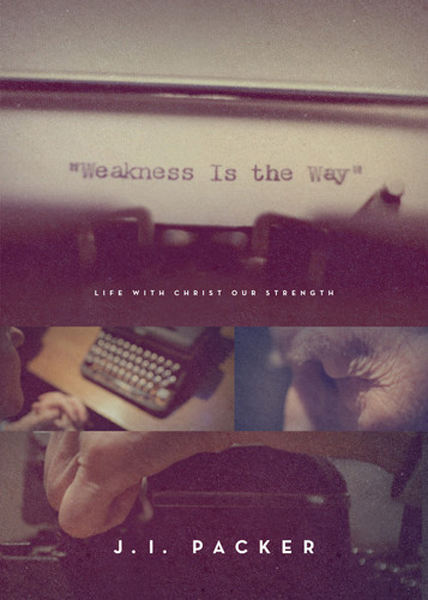 What exactly is a “devotional book”? Perhaps we hear this term less frequently than decades ago (when I was a young Christian), but the designation is not entirely moribund. These works should teach truth about God that motivates us to a more earnest and clear-minded devotion to God himself, which results in our own greater sanctification and the glorification of God in and through us. These books should instruct and exhort Christians to become better Christians in various says, such as developing a deeper faith, to overcome vices, to learning to reach out to others evangelistically, to serve the poor biblically, and much more.  In recent years, devotional books (if that term is used) have tended toward the memoir form, which is usually weak on biblical substance, but is filled with autobiographical content, much of it irrelevant to the reader’s edification. Equally disturbing is the trend of books written by or about “successful” mega-pastors and other celebrities, whose popularity is not typically based in their wisdom but on external charisma.

James I. Packer is one of the stalwarts of evangelical theology and devotional writing in the twentieth century and in the twenty-first century. His reputation lies in his knowledge and character, not in fluff. What makes this emeritus professor at Regent University a treasure is that, unlike so many others, he never separates theology from Christian spirituality. In 1970, InterVarsity Press released a book with a simple, but profound, title, Knowing God. Over against much of the “spiritual formation” movement of the past twenty years, Dr. Packer exposited the being and character of God as the primary point of concern for the serious Christian, not particular experiences or methods by which to obtain these experiences. The unparalleled greatness of the Triune God must be our source of knowledge, strength, and character, Packer argued in this modern classic. Like his Puritan heroes (who he would later write about), Dr. Packer neither sacrificed the mind to feelings or feelings to the mind. Rather, a proper apprehension of God—as he has revealed himself in the Scriptures—grounds us in the proper place: God’s objective veracity and bearing on life.

Through his long and fruitful ministry, Packer has faithfully taught at several institutions, written over forty books, and was a gracious endorser of others works. How many books have Evangelicals my age (56) seen that bear a Packer endorsement? Like the recently deceased John Stott, a fellow evangelical Anglican, Packer based his teaching and writing in biblical exposition. And so it is with this thin, but noteworthy book, which is probably his last, Weakness is the Way. With the thinnest of autobiographical reference (22-23), Packer mentions his own increasing frailty and some of his life struggles. It is only Christ who made a way through this weakness. But his personal note is not his real point. Rather, Packer’s burden lies in the exposition of Paul’s second letter to the Corinthians. As usual, Packer is pastoral, intellectual, and theologically astute. It is a rare skill to find someone who can speak to the new believer not yet well-versed in Scripture and still stir an old soul such as myself, with thirty-seven years of Christian life partially lived (to steal a phrase from Alvin Plantinga).

The simply stated, “About Weakness,” is the first chapter, which begins with a vignette from House at Poo Corner—an unlikely source, but fitting in Packer’s hands. In one sense, we all need to “be strong” to get things done; we need to summon the courage, and so on. Yet, biblically understood, that strength does not ultimately lie in us, but in the power of God—our Maker and Master. Paradoxically (but not illogically), to be weak in our own resources allows us to draw on the strength of God himself—for whom we are made in the first place. To cite an example not used by Packer, no Christian can sing Frank Sinatra’s hit, “I did it my way.” That egotistic affirmation will end up being the lament of hell. Or, as C.S. Lewis put it in his short, but profound, novel, The Great Divorce:

After a brief introduction, Packer introduces the difficult situation at Corinth to which Paul second letter is addressed. Some were claiming more authority than Paul and were throwing the flock into disarray. Paul needed to set the record straight, but without visiting them face to face. Thus, a letter was required. The rest of this short but cogent gem of a book explains Paul’s argument with the Corinthians, all of which centers on his own spiritual weakness as opposed to the worldly strength of his counterfeiters. The book is exposited in matchless Packer style, which combines a high-culture, extremely literate (see the remark on pages 42-43, especially) and biblically deep perspective with pastoral sensitivities and a light touch. It is neither pedantic nor superficial.

The three expository chapters are: “Christ and the Christian’s Calling,” “Christ and the Christian’s Giving,” and “Christ and the Christian’s Hoping.” Without any noticeable scholarly apparatus, Packer takes us inside the mind of Paul, and explains the cultural background and theological controversies. He issues significant challenges to today’s readers to stay true to Christ, to give all they can, and to place their hope on nothing less than the risen Christ, just as Paul did. All these lessons center on the virtue of admitting weakness, which appears foolish to the unregenerate. But our very inability in our natural resources is God’s opportunity to show his strength in our weakness. That is why “weakness is the way”—the way of faithfulness and fruitfulness. This mode of being fights against the habits of the flesh, but it the vital truth of the Christian life rightly lived. Francis Schaeffer spoke of this reality as “the moment-by-moment dependency on the Holy Spirit” in his classic, True Spirituality. I encourage everyone to read Packer’s rich and wise volume, which is likely the last from a giant of contemporary evangelicalism.