Women’s Divination in Biblical Literature: Prophecy, Necromancy, and Other Arts of Knowledge 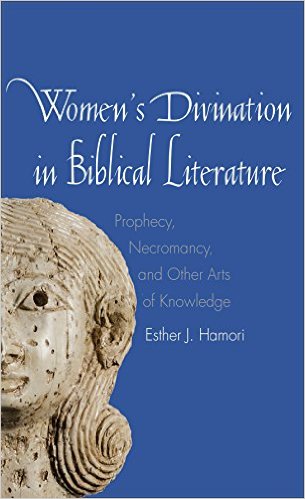 In this survey, Hamori seeks to identify evidence for women functioning as diviners in the Old Testament.  Her definition of divination in the Bible includes intention, interpretation, or an indication of the identity of the diviner.  It includes prophecy as well as other forms of access to this special knowledge.  There has not been a study exclusively devoted to female diviners in the Bible.  Yet the presence of female diviners occurs in Mari, Neo-Assyrian prophetic sources, and other literature.  This was a recognized position in the ancient Near East, one that finds testimony in the Bible.  One of the major points that Hamori repeatedly makes is the absence of difference between magic and religion and between prophecy and divination.  The “us vs. them” tendency has resulted in negative terms for the perceived “bad guys” and positive terms (religion, prophecy) for the good ones.  While more may be reflected in this terminology, Hamori has much of value to say about the manner in which the functions of the good and bad resemble one another.

Hamori begins with Isaac’s wife Rebekah, whom she properly designates as an Aramean, based on her origin.  This allows her to note distinctives connected with her activity that also occur in Syria.  In Gen. 25:22 Rebekah enquires of God, something regularly assumed as self-determined activity when applied to men.  Some identify Rebekah as having used an intermediary to enquire of God but there is nothing in this text to support that.  Genesis 25:23 records how God speaks to Rebekah when she was to give birth to the twins within her who “crushed” one another (a translation that Hamori justifies on the basis of usage).  Working with some possible etymologies Hamori suggests that the oracle and name anticipate the events that follow.  She notes the šumma izbu omen series and those describing the birth of twins, much of which is connected with negative effects on the land.  In Genesis 24 Rebekah acts out the sign that Abraham’s servant requests.  She becomes an omen, as Hamori notes.

Miriam is the first woman designated as a prophet in the Bible.  Hamori discusses her role in the Song of the Sea and distinguishes such victory songs from female prophets; that is, not all female prophets must sing victory songs.  Hamori reviews her role in challenging Moses and concludes that the decision to single her out for punishment has to do with her role as a prophet, a role that confronts that of Moses.  The divine concern is to demonstrate that Moses is uniquely chosen by God and that his authority is above that of Miriam as well as that of Aaron.

Hamori argues that Deborah’s roles as prophet and as judge do not refer to the same thing.  As with Moses and Samuel, the only two other characters so designated, there is both a prophetic and legal aspect to her work.  In this she more closely resembles Moses than Miriam.  Hamori finds the taunts against Hannah to cause her to become angry rather than sad.  She is angry at Peninah.  Therefore the psalm of 1 Samuel 2 celebrates the vindication Hannah.   Hannah’s association with prophecy occurs not in 1 Samuel but in later Jewish tradition and in the reflection of this psalm in the Magnificat of Luke 1.

In her discussion of 1 Samuel 28 and the woman portrayed there, Hamori draws two important conclusions.  First, this woman at En Dor should not be identified as a witch but rather as a ghost-diviner or necromancer.  Second, the narrative does not pass a negative judgment on the woman, unlike Saul.  On the basis of v. 5, Hamori suggests that the text does not relate that the woman saw Samuel, but that she feared Samuel and that this led to her cry.  Saul cannot contact God so he uses a ghost-diviner who then connects with another intermediary, the dead prophet Samuel.

The wise women of 2 Samuel are favorably compared with other Israelite prophets such as Nathan and Elijah and Elisha, as well as with female diviners in Hittite and Ugaritic sources.  Turning to the books of 1 and 2 Kings, Hamori observes how Huldah is the first recorded person to authorize a canonical text.  There is nothing in the text that suggests that Josiah’s decision to consult a woman was unusual.  Huldah’s prophecy that Josiah would die in peace does not come true, according to Hamori.

Moving into the prophetic literature, Hamori considers the figure connected with Isaiah in chapter 8.  There the feminine form of “prophet” likely indicates she was a prophet rather than that she was a husband of a prophet.  This arises from the feminine forms of male titles, which are regularly used to indicate a role rather than the wife of a male who held that role.  In this case the woman “literally delivers an oracle” in the form of a child who is a sign.  A second sign child occurs in 7:14 where the explanation in the following verses indicate the significance of the name.  The same occurs in Hosea 1 where the children’s names are part of signs (omens) related to God’s relationship with Israel.

Ezekiel condemns false divination, whether male (13:1-16) or female (13:17-23).  Hamori argues that the women appear to be involved with communication with the dead, and are doing so in the name of Yahweh.  Joel has Yahweh giving his prophetic spirit to both genders.  Although she is a male in the versions, the Noadiah of Neh. 6:14 is his enemy whose prophecy many have been manipulated by others.

Hamori also reviews two texts that allude to divination, that of Rachel who takes the teraphim and that of Micah’s mother who commissions a divining object.  Rachel steals the teraphim because she wants to use them for divination.  The objects of Micah’s mother are for the purpose of enquiring from Yahweh.  The “dangerous woman” of Proverbs 6 also engages in a kind of metaphorical necromancy, using similar terms found elsewhere. She preys on men using descriptions that parallel the third tablet of the anti-witchcraft ritual, Maqlu.