Dr. Don Payne spent some time with Dr. Klein as he shared about his life and career. We’ve captured some of the highlights here. 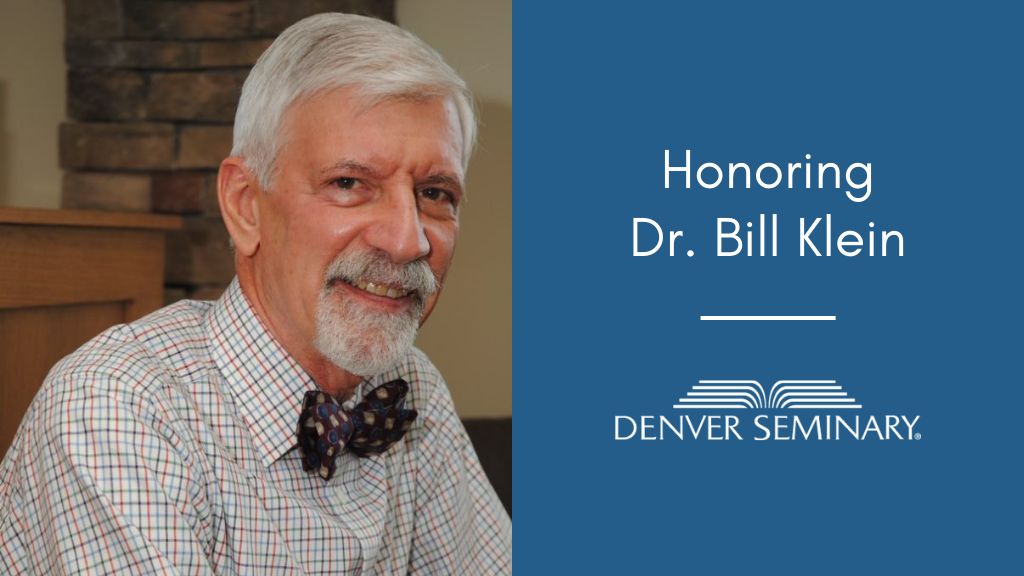 Since 1978, Professor of New Testament Dr. Bill Klein has been an esteemed member of the Denver Seminary faculty, revered not only for his scholarly work, biblical and theological knowledge, and excellence in the classroom, but also for his iconic handlebar mustache. He’s an MDiv graduate from Denver Seminary, and holds a BS from Wheaton College and a PhD in New Testament from the University of Aberdeen Scotland. He has served in pastoral ministry and has been an elder in various local churches during his years in Denver.

Dr. Don Payne, VP of academic affairs, academic dean, and associate professor of theology, spent some time with Dr. Klein as he shared about his life and career. We’ve captured some of the highlights here.

Don Payne: What’s the story behind the handlebar mustache?

Bill Klein: My father always had a mustache. I never, ever saw him without one. So when I was a junior in college, I decided that I was going to follow in his footsteps. He always had a pencil thin kind of a mustache – that was his style. And eventually I emerged as much more of a handlebar kind of guy. So that's how it worked.

Dr. Don Payne: You've been involved in church ministry. You were in pastoral ministry for a few years after seminary, prior to doing your doctoral work, correct?

Dr. Bill Klein: I was on the pastoral staff of Calvary Church in Los Gatos, first as a young minister to young adults, and then as minister of evangelism and discipleship. More and more during that four-year tenure, I settled into teaching as kind of the central thing I did, first teaching and leading Bible studies for college students, then teaching others in evangelism. I also devised a program for home Bible studies, recruited Bible study leaders, trained them, and wrote curriculum for weekly meetings. So I decided after four years that teaching was an avenue in which I would fulfill God's call on my life to serve Him.

I first taught at Columbia International University and then landed at Denver Seminary. And once I arrived here, I believe I'd found my niche. Fortunately, I was eventually granted tenure and rose to where I am now, here with my superannuated status, ready to head into the sunset.

During my almost 43 years at Denver Seminary, I've served as a deacon in a small Baptist church and then as an elder in three churches that we've attended over the years, and I have been regularly active in teaching and preaching in the churches my wife, Phyllis, and I have attended. And that's where I want to take my stand. I understand because of being involved internally and integrally in these churches, that, that's where God works. And God works through his people because Jesus died for the Church and loved the Church. And I just decided that I wanted to make that a crucial component of all that I did, even though my primary ministry may have been at the Seminary.

Don Payne: How do you think your doctoral studies and your teaching career might have been different had you not served in ministry first?

Bill Klein: I think I might've had a little different tactic with students because I wouldn't have had that same commitment or love or pull to a church. It's one thing to just be a church attender. I was never that anyway, I was always an elder, but it might've been that I wouldn't have understood what students who become pastors have to go through. I mean, the pulls and the tensions. I wonder in the current day, in a polarized world, how does a pastor navigate different competing demands and values of church members? I think that helps me look at the New Testament when I'm teaching 1st Corinthians and you see the competing demands upon the churches that Paul is having to deal with. That kind of gives me a ground-level appreciation for what leaders in churches contend with.

Don Payne: Talk about some of the authors and books that have influenced you or shaped your thinking.

Dr. Bill Klein: During my earliest days at seminary as a student, a professor introduced us to George Ladd, and Ladd became a hero to me. His understanding of the kingdom of God kind of revolutionized evangelical thinking and certainly mine. I still find his overall take on New Testament theology to be the best.

I also had the privilege of studying with Howard Marshall at Aberdeen and his warm evangelical heart, combined with his meticulous scholarship, became a model… My conversations with Howard when I was a student at Aberdeen set me on a path for my dissertation topic and research. He continued as a friend in the decades that followed.

F.F. Bruce, a British scholar, is another name that comes to mind. Many of his books brought evangelical scholarship into the mainstream of British academia, and that eventually made its way over to this side of the Atlantic. He began, I think, the regular parade of Americans going to the UK to get their advanced degrees in theological disciplines.

Stephen Neill wrote a book in the sixties called the Interpretation of the New Testament 1861 to 1961. It was kind of a history of the discipline, beginning in the mid-19th century to the middle of the 20th century. And it introduced me to the enterprise of academic New Testament study – set the whole picture before me – and that helped me understand how I could try to fit in, in terms of my own academic career.

Don Payne: As you look at the trajectory of New Testament studies, at least over the course of your career, what have been some of the most important developments in that field?

Bill Klein: I think in the 1960s and 1970s, solidifying the nature of the kingdom of God – that is, the kingdom of God refers to God's sovereignty or reign; and Jesus’ announcement of the arrival of the kingdom signaled His call to people to submit to His rule in their lives. This was foundational. And I think it kind of crystallized the work that Ladd and some German scholars had done in the post-war period, but George Ladd really brought that out through a number of books in the New Testament.

And another thing, and this may be more personal – but the movement away from dispensationalism and the pre-tribulation rapture view as kind of “Evangelical orthodoxy.” Eschatology as an issue faded away from the scene as a central topic of concern. In the seventies or eighties, students may have embraced a position on whether Jesus will return before or after the tribulation period. Now I find students kind of mystified by the whole debate or discussion.

Don Payne: I do remember that; that was what everybody was talking about a few decades ago.

Bill Klein: Another is the controversy over women’s role in the Church as it plays out in society, kind of in the larger Church world. I've concluded that the egalitarian view is the correct one, and that various attempts to support complementarianism or hierarchicalism fail on both biblical and historical fronts. That battle continues to wage among Christians, but the raising of that issue has made a major impact in our culture and biblical studies.

In addition, there is a more sophisticated understanding of Greek grammar, growing out of developments in the field of linguistics.

And lastly, I can't fail to mention the debate around the new perspective on Paul that grows out of a better grasp of the nature of Judaism in the first century A.D. That is a number of writers who have demonstrated that Judaism was not a religion of works. Certainly some Jews may have believed that they could merit God's favor by their works, but to say that Jews uniformly believed that they could merit salvation is much too sweeping a judgment. So for New Testament scholars and other readers we need to be careful on how we understand Paul's contests with the Jews.

Don Payne: What is it about the ethos of Denver Seminary that you hope will continue into the future?

Bill Klein: I first arrived here as a student during Vernon Grounds’ [tenure] so I had the chance to know Vernon as a student in the late sixties and as a mentor after I graduated, and then as a colleague, when I joined the faculty.

Vernon fostered personal relationships and connections, and he was a genuine intellectual and deep thinker. Both of those values persist at Denver Seminary. I hope I my colleagues on the faculty continue to value and prioritize the occasions for a personal connection that have enabled faculty to know each other, to be friends, to develop relationships. I realize that a consequence of growth and many other demands on faculty members sometimes squeezes out opportunities for connections. So the relational thing: the personal relationships, the congeniality among faculty members, which I know talking with colleagues in other schools doesn't always exist. In fact, it may be a rarity.

Don Payne: What does retirement hold for you? What are you looking forward to?

Bill Klein: I started thinking about four or five years ago: I don't think I want to retire from the Seminary. I want to retire to something. So I've always been casting around what is it I'm going to retire to? And to be honest, nothing has emerged as something that has grabbed my attention. So, I'm at the point of thinking: “Well, I've done this long enough.” And I've made the contribution I think God has called me to make here. I'll turn this chapter, I'll leave this world, but I'll still be around and I'm still in Denver. And I still have the option of doing research and writing if that should come about. But I'm looking forward to just being with my wife, being open, being able to do a bit more traveling than we had done before. Just enjoying life and enjoying reading and spending time with my children and grandson. So it's not a highly structured program that I have mapped out. I'm just going to see how things emerge and try to do the things that I think are important in my own personal, spiritual life with Jesus – just proceed down the path and see where the Lord directs me.

Don Payne: On behalf of many others, let me say, I hope you and Phyllis enjoy that fully and completely and relish every moment. And you deserve the rest. We're grateful for you and Phyllis and your long and rich ministry among us.