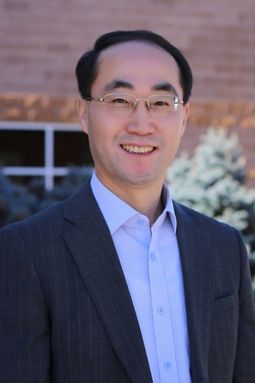 Dr. Sung Wook Chung joined the faculty of Denver Seminary in 2005 and serves as Professor of Christian Theology, Director of the Asian Initiative and Chair of Korean Studies Program. He is a member of the American Academy of Religion, Evangelical Theological Society, Calvin Studies Society, Society of Biblical Literature, and the Karl Barth Society of North America. He served Kurios International, a global missional organization as founder and president from 2012 to 2019. He currently serves C-Connection, a global missional organization as founding chair of the board, Marked Men for Christ as a member of its global board, JD Kim Ministries as a member of the board and Korean American Scholarship Foundation’s Mountain States Regional Chapter as founding president and a board member.

Dr. Chung earned a DPhil from the University of Oxford and an MDiv from Harvard University. He also earned a BA from Keimyung University in Daegu, South Korea, and Whitworth University, Spokane, WA, USA. Dr. Chung served in the Bible and religion department at King University, Bristol, TN from 2000–2005. While working as a professor of theology, he also served the Tri-City Korean Church as pastor.

Dr. Chung has also contributed to The Modern Theologians: An Introduction to Christian Theology since 1918 (forthcoming), Karl Barth and Pentecostal Theology (forthcoming), The Dialogic Evangelical Theology of Veli-Matti Kärkkäinen: Exploring the Work of God in a Diverse Church and a Pluralistic World, The Interface of Science, Theology, and Religion: Essays in Honor of Alister E. McGrath, So Great a Salvation: Soteriology in the Majority World, NIV Understand the Faith Study Bible, Dictionary of Everyday Theology and Culture, The Encyclopedia of Christian Civilization, Oxford Handbook of Evangelical Theology, and Global Dictionary of Theology.

He also authored in Korean Restoration and Transformation of the Korean Church, Bright and Blessed Eschatology, Systematic Theology Made Easy (translated into Indonesian), Christian Apologetics Made Easy, The Cross Theology and Spirituality, The Key Words of the Reformation, Trinitarian Theology and Spirituality, A Theological Dialogue with John Calvin, Apostles’ Creed for Group Study Bible, and Three Doctors’ Dialogue on Theology, Science, and Literature. He co-authored Introduction to C. S. Lewis and Introduction to Jonathan Edwards. He also translated the works of Paul Tillich’s The Theology of Peace, Jonathan Edwards’ Religious Affections and Concert of Prayer, Michael John Cusick’s Surfing for God (co-translator), John Jefferson Davis’ Meditation and Communion with God (co-translator) and Alister E. McGrath’s Evangelicalism and the Future of Christianity into Korean. He is a frequent conference and seminar speaker.